The Other Side of Gencon 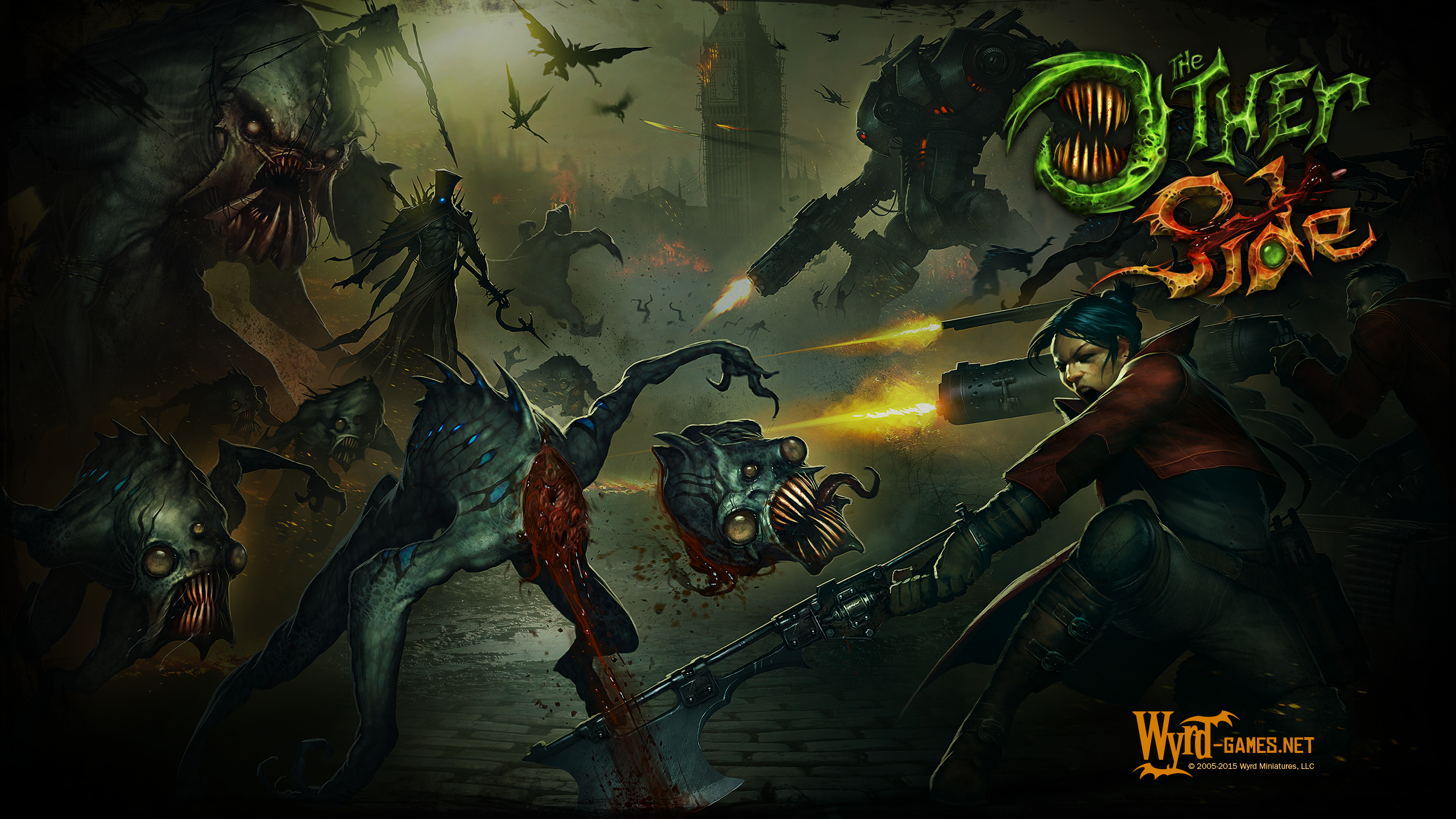 One thing I’m surprised hasn’t gotten a bit more coverage in the weeks after Gencon is the pamphlet they slipped into the shopping bags regarding the upcoming army scale game, The Other Side. It has a handful of images I haven’t seen anywhere else and some details regarding the game itself. I thought, perhaps, I could share them with you.
As we know already, The Other Side is a combat game featuring larger scale armies battling earthside against an invasion of creatures from Malifaux. From the Ripples of Fate fluff, we can infer that the cause of this invasion is a general disruption of the aetheric barriers between Malifaux and Earth caused by the Governor-General’s failed attempt to become a Tyrant. The year is 1906, and a blazing light has appeared over London, portals to Malifaux through which aquatic creatures are pouring en masse to invade Earth. They’re opposed by the forces of The King’s Empire, aka British troops that are defending the city from the Gibbering Horde. These two forces will be included at the launch of the game in the Battle of London, with others being introduced later. The pamphlet’s a little vague on the details, but presumably the rate of their inclusion will depend on the success of the coming TOS kickstarter and could feature the Cult of the Burning Man and the advanced steampunk armor and weaponry of the African nation of Abyssinia (one individual from the latter is responsible for building the Infamy, Captain Zipp’s stolen skyship.) The ultimate goal of this, according to Wyrd, is to plunge the Earth into a true World War, so this is likely just the beginning of the possibilities for future allegiances.
Mechanically, the game will be played on a 6x4 table with scattered, light terrain. It will keep the alternating actions format from Malifaux and will still feature players trying to complete objectives that will lead to ebb and flow of the battle. Rather than the traditional morale rules from most games (IE your unit fails a test and runs away/has something bad happen to them) TOS will feature Glory, where your troops are inspired to greatness by things happening in the game. Every unit’s stat card will have a normal side and a glory side. When certain conditions occur on the board a player flips them over and the unit gains better stats, actions, and abilities. Additionally, armies will have Stratagems they can use during the battle to represent lines of supply, hovering zeppelins, and magical rituals that are activated by the commander at strategic portions of the game to give your side an advantage. At the beginning of the game you’ll select your allegiance and choose a commander to lead their company into battle. You still hire your troops after you know the mission, so you can still customize your force to the scenario. 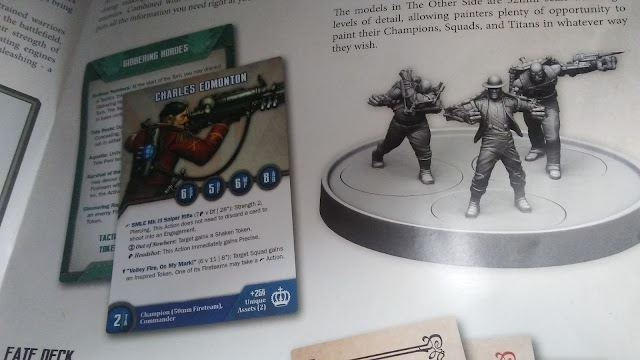 Perhaps most welcome of all to those who have fallen victim to the curse of Yan Lo’s beard, all models from TOS will come preassembled and ready to play. Models will be placed together on movable bases to allow small fireteams to act independently during the game. Models are 32mm scale and “highly detailed”. Their stats in the game are represented on stat cards that include their abilities, and actions are resolved via the Fate Deck as per Malifaux.

As for the convention itself, I had a great time (as expected.) I’d never had the opportunity to run RPG games for conventioneers, and it was truly fantastic. The Hooded Rider, sadly, never managed to escape from the parties of adventurers who came to fight it. Between the teleportation spells of my pre-gen character and the chain spear of the Peacekeeper all my players managed to repair and bring with them, as soon as Hoody decided to make a run for it, it was usually too late. However, I did have a very satisfying time chopping one of my players in half anime-style in the final game of the convention.

Final statistics:
Fated Killed: 2
Red Shirt Mercenaries Killed: 22
Highlights: 1) Mary the channeler teleporting Leshe the corrupted Waldgeist 30 yards away and the party then spending the rest of the combat pelting him from range as he ran back, killing him before he ever got back to melee. 2) Mary teleporting the Doppleganger that tries to integrate into the party next to the Peacekeeper and then ordering it to tear the thing’s head off. 3) Cutting Johnathon in half with a 21+ flip on the severe critical table. 4) Having the players construct a litter for Captain Daughtery that they attached to the back of the Peacekeeper in one game. 5) Having Mason (author of Bad Moon Rising and current writer for TTB) come by after each game session to see how the players did. 6) Obviously, meeting so many cool people and playing so many cool games.

I have to say, given the opportunity to volunteer for Wyrd again, I would leap at the chance. Not only was it a lot of fun, but they really take care of their helpers at the con. You’re sacrificing your time, obviously, but if you’ve been to Gencon for multiple years you know that, eventually, you start to get a little burnt out when you’re all-day every-day doing convention stuff. This is the first Gencon I’ve been to when that didn’t happen. I was still fresh and excited to play my final session of Bad Moon Rising on Sunday (though I’ll admit my voice was not.) I also did a couple of sessions of demoing Malifaux for new players in the miniatures hall, which was also enjoyable. I do wish that people would show up in a better mood and slightly less drunk when they come for demos in the evening, but for the most part people were interested and excited to learn the game and it definitely passed the time in a hurry. That would be reward enough, but getting your badge paid for and getting reimbursed by Wyrd for, essentially, playing games all con long was really top notch. I can’t recommend it more highly to people who are thinking about volunteering next year.

The only cost is, of course, that you don’t have as much time for gaming. The only tournament I played in was a henchman hardcore on Friday night which was a last minute impulse entry. Ultimately, I should probably have just gone home to bed, as I was playing with Jon’s Hungering Darkness and a crew I threw together just before the event (having never actually played this format previously.) Pro tip: Df3 Hungering Darkness has a hard time in Hardcore. I’m not crazy about the format in general, as the short game times essentially turn most games into an exercise in who can alpha-strike the other crew’s henchman faster, but that could be just sour grapes on my part. Maybe with a bit more time and effort put into preparation I would do better. In any case, I finished middle of the pack, handed my models back to Jon, and went off to bed that night with knowledge of a new format, so I suppose I can’t complain.
Most importantly, the reason I went was to go see people I don’t see otherwise. Most of my gaming friends live in Omaha and Lincoln, Nebraska. I moved away three years ago and, since then, have only seen them when we go back for Christmas to see my parents. They’ve since moved away themselves, so there is now no other time when I’ll meet up with them other than at the convention. Hopefully, I’ll be able to make it back next year and keep the tradition going. Additionally, I met up with Nick and Victoria Hrenda from my Malifaux group in Lincoln. They’ve since partnered up with other henchman in Omaha and the Midwest and grown the community into something huge, and I like to think I at least played a little part in getting the ball rolling for that. They’re a great group of people who were members of the Through the Breach podcast and have orchestrated their own large-scale tournament in Omaha. Plus, I got to meet a lot of members of the Malifaux community at large, including Mason, Aaron, Nathan, and Eric. Excitingly for the future, I also met Dawn (Sassy Lady) who runs the Southeastern Malifaux Players Group in North Carolina. Hopefully I’ll be able to make my way to some of her tournaments someday soon.
So, I think that wraps up the Gencon coverage. I’ll certainly miss having a new topic to post about regularly (and the additional traffic to the blog.) I’ll admit, I was surprised at how popular the review posts were and I’ll be committed to doing more like that in the future. Towards that end, I’ve added our blog to Patreon as a way of covering expenses for future books, conventions, etc. I know Jon’s enjoyed writing up tournament report posts, and hopefully we can start offsetting some of his travel costs to keep those coming. And, of course, books and models also cost money. If you enjoyed the reviews and think our little blog is worth a dollar a month, we’d love to have it. Just go to https://www.patreon.com/user?u=3845239 and sign up as a patron. We don’t have a ton of rewards designed yet, but in the future we may work our way up to premium content in the form of strategy and tactics articles, fiction set in the world of Malifaux, and organizing Vassal leagues and/or Vassal Through the Breach campaigns to keep things growing.

If you missed them, here are some links to each of the review articles for the factions in Ripples of Fate: Guild, Neverborn, Resurrectionists, Arcanists, Outcasts, Gremlins, Ten Thunders. 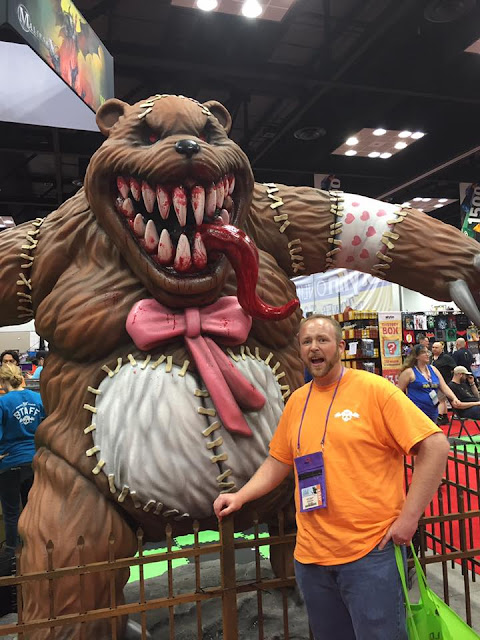 Posted by AgentRock at 3:19 PM

Email ThisBlogThis!Share to TwitterShare to FacebookShare to Pinterest
Labels: Gencon 2016