So I guess we saved the best for last... (debatable but I feel I must represent!)

Asami's upgrades
- Feigned Weakness.  1 SS  In my opinion this strikes me as a trap.  It allows you to summon a model if your opponent ends the turn with more VP than you.  It will come in with flicker +2 and the bigger the difference in VP, the bigger the model you can summon.  If you have schemes that score end of game and you are close to 100% certain you can score them this is a bargain for 1SS but in a tournament differential is a thing so ceeding your opponent VP to use this ability is generally not a good idea.  But it is totally a play style decision.
- A Heavenly Design.  2 SS gives Asami a 0 action 6" teleport and a 10" aura that when a friendly model is sacrificed place a scheme marker into base contact.  It should be noted when flicker ends the model is sacrificed so this is going to be free VP for the summoning she is going to do anyway.
- Grasping Strands. 1 SS gives her an aura 4" that reduces the number of attacks generated for enemy models by the charge action by 1.  Also grant a trigger to Reaching Tendrils for a free Ml after succeeding.
- Nefarious Pact.  2 SS after she activates draw a card.  More importantly 10" aura where friendly models can chose not to end conditions if an action or an ability of an enemy model would require you to do so.  I don't see a ton of condition removal in lists.  That said you can either hunt those models or take this upgrade and not worry about the summoned oni being 1 shotted.
-A Fate of Mortals.  2 SS.  Any Oni model can take this upgrade.  once per turn if your opponent scores 1 or more VP, 1 target friendly Oni gains flicker +1.  Also a 10" aura if a friendly Oni minion kills or sacrifices an enemy it may draw a card. 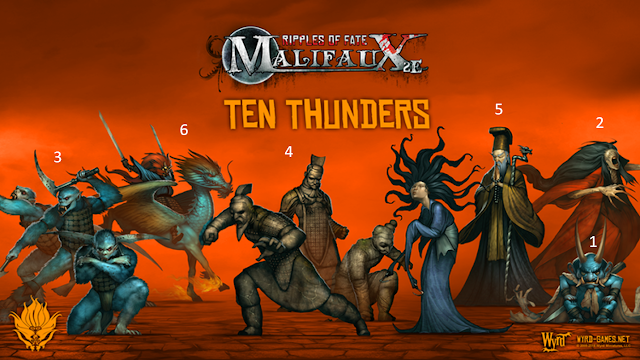 Amanjaku- 3SS peon totem-  insignificant, disguised, manipulative 13.  a 1" Ml for 1/2/3 and plus damage = to your opponent VP upto +2.  flay trigger.  A Ca action that lets you increase the value of a condition by 1.  And a 0 action that requires  a TN and a suit to put up an aura to put Sh on a negative within 6"  Not sure how I feel about this totem but when I get the set I will put it on the table before I reserve judgement.

Ohaguro Bettari- 8 SS henchman - The Bird and the Snake, Enemy models with in aura 6 may not declare Df or Wp triggers.  Squeel all you want gremlins... it will do you no good.  Drawn to Essence, may chose to place into base contact with models that summon in within aura 6".From the darkness, May charge regardless of LOS and ignores models and terrain during the charge.He has a 2/3/6 Ml with flay, and 2 other triggers.  Ploughed Over if you win do no damage, push the model 4" away and then charge a different target, once per activation.  Or after succeeding place a corpse marker into base contact with the target. He has a 12" cast to place a condition that stops the model from charging.  And he has 2 zero actions, 1 makes a oni at range 6" to take an interact, and the other turns on a 4" aura to add masks to Ml for oni... sad illuminated but still solid (auto flay??? yes please!).  I'm kinda mad I didn't buy this box just to have this guy at gencon.  But I can wait for release.  Also has a 1SS upgrade for eat your fill.

Yokai - 5 SS minion  - plus flip to charge attacks.  Starts with flicker 5 if you hire him. Gets the option for an extra flicker +1 on summon.  And if he is still on the table after flicker and poison is lowered you may place it within 3" not in terrain. Ml for 2/3/4 damage with flay and 4 other triggers.  And he comes with 0 action to lower flicker by 1 to take a 1 interact with a heal trigger.  Don't know if I would hire these guys but I might try it just see.  But odds are I won't have stones to hire them anyway.

Terracotta Warrior - 5 SS minion - I'm going to say I was on the fence about this guy but he has a little bit of versatility.  Thousands Strong, if this model suffers damage from any source other than something that targeted it it may place a card from your hand on the bottom of your deck to prevent the damage.So if you get a bunch of crap cards this guy can potentially go into overdrive.  Armor +1, Unimpeded.  A 1/3/5 Ml with a trigger for +2 damage to you and the target.  It has a Ca to place a condition on non Terracotta minions or enforcers where you can misdirect the damage to this model and end the condition.  And a 0 action to change upgrades that cost more than 0 to other upgrades.  You have to pay stones if the new one costs more.  I will be running this tomorrow just to see what in all I can do with it.  This guy is more utility than most minions so it plays into some of the things I like to do.

Sun Quiang - 8 SS enforcer.  4 abilities on the front of the card.  Thirteen Measures, enemies that activate within 4" must past TN 12 Wp duel or gain slow.  Don't mind me. Absolute Sincerity, when this model activates all models in pulse 4 heal 1 damage.  King of medicine, when a model within LOS suffers damage you may place a card at the bottom of your deck to push up to your walk toward the model.  If you push at least 3 you may take a 1 interact.  He has a weird Ml which is Rg 6 or close 1 no damage track but 4 triggers, tome discard all scheme corpse and scrap marker within pulse 2 of target, Ram (built in) heal or deal 2 damage, Crow hand out the adversary condition, Mask after succeeding vs an enemy place the target within 6 of its location not in terrain.  His tacticals are a 1AP Ca A Recitation of the Essential Formulae which activates an aura that makes enemies within 4 count as a peon.  His zero Study targets a scrap corpse or scheme marker, place a friendly scheme marker then discard the target.  This guy is going to be very annoying for the opponent.

Yasunori - 12 SS enforcer. This guy is kinda a rider as far as stats go but that's where the comparison ends.  He does come with armor +1, stubborn, flight, scales of heaven once per turn, when this model suffers damage draw a card.  He has a 3/4/5 Ml with plus to attack that has 2 once per activation triggers for a bonus attack, 2 suits for 1 and the other 2 suits for the other.  A cast to make any minion take a 1 AP attack action with a trigger for bonus damage equal to VP the models crew has up to 3. And he has a 0 action to look at the top 3 cards and put them back in any order. With Asami if you give this guy fast and use recalled training you can charge for 1 AP with a 12" threat range and if you kill that model in 2 to 4 attacks you can charge a second target with 2 plus the remaining unused triggers.  This guy is going to wreck 2 models and then probably die if he is in the thick of combat.  But he will soak up AP to remove so still worth it.  He is not as scary with other masters but still needs to be dealt with.

The Peaceful waters- Grants the Low river monks a Rg 6 heal flip if they are within 12" and LOS of the model with the upgrade.

Equality - once per turn after the opposing crew scores 1 or more VP do one of the following:draw a card, place a scheme marker in base contact with this model, or heal 2 damage.  I don't see myself taking this upgrade to have it, but I might use it to draw a card or 2 then flip it to something else with the terracotta warrior.

Death contract- comes with a decoy card, both don't count vs upgrade limit, play both face down, and if you kill or sacrifice the model the model that killed it must discard 2 cards or 2 stones or be killed..

Let me know if I need to fix anything since this is not really a strong suit of mine.  I will go back and update the Arcanists when I return from Wandering River Style.
Posted by Unknown at 10:26 PM