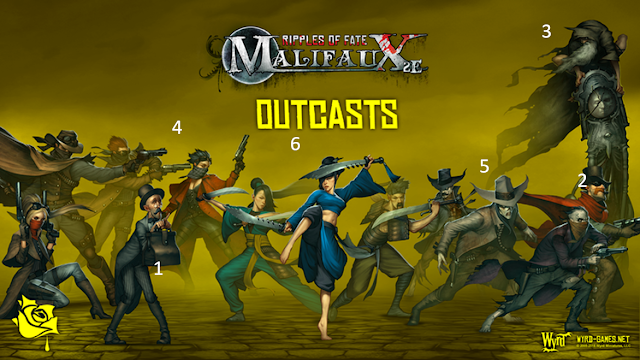 1: Doc Mitchell: A failed doctor and alcoholic who Parker kidnaps in his fictional story, he’s a 3SS insignificant minion totem. At the start of his activation he can discard a card to push up to 5” towards a friendly Bandit within 12”, so that’s a nice little movement boost. His best ability is probably his Stitch Up heal for 1/2/3 and a trigger to give the healed model Hard to Wound. Offensively, he isn’t particularly effective, as his melee attack isn’t very good and his ranged attack ends with him dying if Parker can see him use it. 3ss is a pretty good cheap activation and some nice healing, so I imagine you’ll use him.

2: Mad Dog Brackett: A 9ss henchman, he’s Parker’s right hand man. The weapon is a shotgun, for those who weren’t sure, and it’s a good source of damage and blasts that pushes damaged models back with a built in trigger. All enemy scheme markers within 2” of him become friendly at the end of the game. He drops a friendly scheme marker in base to base with a model after he kills them. And, finally, he gets a Santiago-esque bonus to attack and damage flips when he has four or fewer wounds remaining. He can Rapid Fire, so he’s definitely built around ranged attacks. He doesn’t really have a melee attack, as his main one involves putting his cigar out on people. It does Burning+2 and, with the appropriate triggers, can do a little more damage or give him a melee attack with his shotgun (to push the enemy out of melee, if it hits.) Finally, probably the most interesting ability is his Blow it to Hell (0) ap action. He needs a ram to cast it, but it places a 30 mm Blown Apart Marker within 8” and LoS. Any models within 3” of a marker is unable to use cover. I think that could be pretty effective for a ranged crew, though it might be better if you could also ignore LoS. Still, I think he’s a pretty effective damage dealer, but he’s in the Outcasts so he’s going to have a lot of competition for this slot.

3: Aionus: You know what he does. Moving on.

4: Bandido: These are the minions that come in Parker’s boxed set. They’re 5ss fragile minions, as Bulletproof+1 is probably one of the least useful of the situational defense abilities. They only have 5 Df and 5 Wds, so I don’t think they’re going to get to use Life of Crime to convert enemy scheme markers into Friendly at the end of the game. I guess it’s a good thing they have Finish the Job. Their gun deals 2/3/5 damage and can force the enemy to drop an enemy scheme marker with a trigger. Finally, they can Run and Gun for 2 ap to let them move, shoot with a + flip, then move again. I don’t know, they just look fragile to me. Run and gun will protect them somewhat, but who knows.

5: Dead Outlaw: Where I’m not crazy about Bandidos, Dead Outlaws look a lot tastier. They’re just what the title says, dead bandits that wake up and then resume banditry. They count as undead/tormented/bandit minions. For 6ss they’re a point higher defense, one more wound, hard to wound, and get a heal every time an enemy scheme marker is placed within 6” of him (which should be fairly frequent in a Parker crew.) Their ranged attacks have a better attack value, deal extra damage to targets which have upgrades attached from a built in trigger or can reposition with the same suit. For a tome you can either use Drop It! to force the enemy to drop an enemy marker (and heal the Dead Outlaw, presumably) or ignore Armor, Hard to Wound, and Hard to Kill. Their melee has an odd damage spread (1/1/5) but has some useful triggers built in that can give the enemy slow or push the outlaw out of melee. Finally, they can cast a spell to give an enemy a condition “Curse of the Covetous” which makes it so they can’t take any actions besides walk and interact. The model can choose to take 3 damage at the beginning of its turn to remove the condition, but it could be useful to lock a melee model on low wounds out of attacking. Altogether, I don’t know why you would take a Bandido over these.

6: Wokou Raider: These are oriental pirates who sailed the waters of the Three Kingdoms and were imported by Malifaux to try their skills on its rivers. They haven’t had as much success with this, but they’re still effective combatants so the Ten Thunders keep using them. They’re Bandits and Last-Blossom minions which cost 8ss, so on the pricey side. Bulletproof is a lot better, in my opinion, when paired up with Combat Finesse which makes it so enemy models can’t cheat fate on attack actions which target Df. Every time an enemy scheme marker is placed within 6 of them they can push 3” in any direction, so they could have a lot of added mobility in the Parker crew and can potentially dodge away from Detonate the Charges. Their 2/4/5 with plus flips melee attacks are pretty strong and can hit the Drop It! Trigger from a built-in tome. With a mask they can give a free attack to another friendly model engaged with the same target. And, of course, they have critical strike. I doubt you’ll use their gun much, as it’s pretty standard. And, they have a (0) action to reposition a scheme marker. They’ve got some interesting abilities, and I think they’ll see some use for Parker and Misaki, at least.

Upgrades: Parker has a ton of upgrades, so buckle in for this one. The two limited actions both give Parker Bulletproof. One lets him add a soulstone to his pool whenever a friendly model takes an action to remove an enemy scheme marker and can hand out free interact actions to friendly models as a (0). The other lets him draw cards when friendlies remove scheme markers and can hand out (1) ap attack actions. So, essentially, you’ll probably want one of those attached most of the time. To rapid fire through the rest: Crate of dynamite lets you blow up a scheme marker to deal damage, Hail of Bullets lets you place two 50mm Ht 0 Hail of Bullet markers which are hazardous terrain and can provide cover as well as adding a trigger to “Hands in the Air.” Stick Up gives him a WP attack that will either deal 4 damage to an Enforcer, Henchman, or Master or will steal one of their soulstones for you. Human Shield gives you soft cover and lets you pass one attack off to a friendly model within 2,” and finally Coordinated heist gives all bandits within 8" of Parker Scout the Field and a cool ability, “You were told to duck…,” which lets him fire into an engagement involving a friendly model and get an attack on every model involved. You have to discard the upgrade at that point, but you can reattach it to him and take the action again if you’ve got a particularly good pile of enemies in the combat. Phew. As I’ve said several times, Parker’s concept is pretty easy to learn, but you’re going to have to learn when to attach each upgrade to play him effectively.

Mad Dog’s Lucky Poncho gives him Hard to Kill and can grant him Focused+1 if you discard it when he has 1 wd at the start of his activation. Hans gets an upgrade that gives him +1 Wk and a (0) action to give him Focused. Pretty good for a sniper. Montresor gets one of the best “Fix Me” upgrades, I think, as it forces enemies in base contact with him to discard a card to attack and gives him Hard to Wound+1, effectively turning him into the tarpit/tank that he was supposed to be in the first place. One of the generic upgrades, Return Fire, gives the enforcer it’s attached to a Df/Wp trigger on a crow to let them shoot back at the attacking model after resolving. And, finally, “The Bigger They Are” make their melee attacks deal an extra point of damage to non-master models with upgrades attached, and so it is a good anti-Show of Force upgrade.
Posted by AgentRock at 4:14 PM