Ripples of Fate Reviews: The Guild 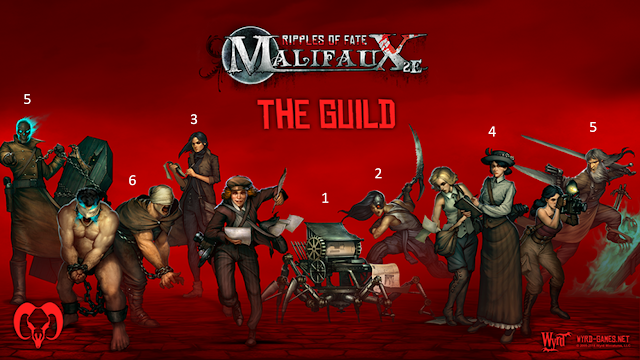 1.       The Printing Press: This is a pretty boss totem. It’s a mechanical press on arachnid limbs Nellie constructed and animated with a soulstone carried by her father. Its protectiveness has led her to suspect that it may have a portion of his soul inside. It has Arcane Reservoir+1, which is always a good thing. Df5 and WP6 are pretty strong for a totem, especially paired with Armor+2. Models that are pushed or placed in base contact with impassable terrain within 8” of it take a point of damage. Its melee attack hands out slow, which is awesome, and deals a little bit of damage if the target is already slow. And, for a (0), it can hand Nellie some evidence and let her go immediately after it as a chain activation. Very good. Don’t know why you would leave home without it.

2.       Phiona Gage: She’s a union worker who suffered a terrible accident, was denied work, and is now held up by Nellie as an example of the Union’s corruption (despite the fact that the Guild caused the accident that injured her in the first place.) She has ok defenses for a henchman, hard to kill, and goes up to 7 DF when she’s in terrain. Unimpeded helps make it so you’re essentially never going to want to walk her in the open if you can help it. She gets a smell-fear-esque free attack on enemies that fail a WP duel outside her activation. Her pick-axe does pretty solid damage and gets a + to attack versus models that have already activated (which Nellie can set up with Incite from one of her upgrades.) Probably one of her most defining abilities is calling up a 50mm stone pillar of hard cover blocking impassable terrain (we all know Adam likes summoning terrain.) And, finally, she has a Francisco-esque ability to jump into melee with someone who is engaging one of her friends and then push the friendlies away while gaining a free attack. She’s a pretty solid henchman who would be used all the time in some other faction. In this faction she has to contend with Ryle, Francisco, etc. in this point value slot so we’ll have to see how she measures up to them.

3.   Allison Dade: Hurray for Through the Breach characters in Malifaux! Dade is a reporter from the backwater contract town of Innocence who survived the chaos there and has relocated to Malifaux, joining the staff of the Tattler. She’s a monkeywrench henchman designed to basically screw up whatever the opponent is trying to do (very Lois Lane-ish.) Before she activates she penalizes enemy models for declaring attacks near her, and after she attacks she heals her friends when they attack, so deciding when to activate her will be important. She’s manipulative 12 and can gain fast by discarding a card whenever the opponent gains VP. Nice. Her attack hands out slow, deals damage if the target is near a guardsman, and has a trigger for each suit that hand out a variety of debuffs (Discard a scheme marker or take damage, push a target away, discard a card or take damage, or push a friendly into melee with the target.) She can put a condition on enemies for a (0) action that deals damage if they declare an attack action, and her tactical action forces an opponent to either discard a scheme marker or show you their hand. She seems incredibly annoying.

4.       Field Reporter: What can I say about these guys that Joel Henry and the Schemes and Stones folks haven’t already drooled about? 4SS earns you an unimpeded, disguised, manipulative 12 minion that can function as a scheme runner. They’re woes, which is odd since Pandora doesn’t get an upgrade to hire them (maybe some time in the future, fingers crossed.) Their attack action does nothing on its own but has an array of triggers including dealing damage every turn, slowing, giving a – to attack actions, or pushing the model 5” away. They can hop to enemy scheme markers and discard them with the same AP. And they can ditch a card for Reference the Field manual to let them choose the trigger on their attack. For the cost, these guys are pretty solid. Joel’s suggestion of taking Embedded on Nellie and hiring four ronin and three of these guys seems really aggravating, to be sure.

5.       Death Marshal Recruiter: These guys are basically what you think they are-Death Marshal veterans that go out into the world to find new Death Marshals. We need “Lady Justice Wants You” recruitment posters. They have DF/WP 6, 7 wounds each, and hard to wound 1 to help keep themselves alive. Apparently the soft life of a recruiter has caused them to forget how to finish the job, but they can now discard a card to keep friendly Guild Marshals within 4” from dying. If you can keep one of these near Lady J, they can keep her alive. Additionally, they can discard a card to target something that is buried. His recruiter’s sword has the ubiquitous critical strike built in to go with the 2/3/4 damage spread and can, with a tome trigger, use Glimpse the Void to bury the target. He also has a Peacebringer for…reasons. He can push 5” towards enemy targets with a (0) action and can, with a trigger, pass out attacks to another friendly model engaged with the target. Additionally, he can use a (0) to give a friendly non-leader model Guild Marshall for a turn. Shame it doesn’t last for the rest of the game like Shotgun Wedding, but there’s probably something exploitative about that. Still, I think they’re pretty solid, and the ability to keep Lady J or The Judge alive for the cost of a card means they should at least merit consideration.

6.       Witchling Thrall: These guys are rogue spellcasters that Sonnia gives…special attention. They’re 9ss minions that sit on a 40mm base and are essentially berserker dudes. They have 12 wounds and impossible to wound, so their defenses probably don’t matter (5/5 for reference.) They automatically pass Horror duels, regardless of the total and can, once per turn, take a melee action when a model places a scheme marker within 4” of them. Said melee attack does 3/4/6 damage and can choose between a pair of built in triggers to either heal the thrall for 2 if attacking someone with a WP 6 or more or force the opponent to discard a card if WP 5 or less. They have a range 8 Ca that adds a little more blast damage to a Sonnia crew and can push all damaged models with a trigger. Finally, they have a (0) action Yank the Chain to push into base contact with a friendly model. The last bit has a crow trigger you have to take if possible which results in your making a melee attack against the friendly model, so you have to be careful. They seem like they can do some hurting, so expect to see some play, particularly in strats like Collect the Bounty where high damage minions are at a priority. 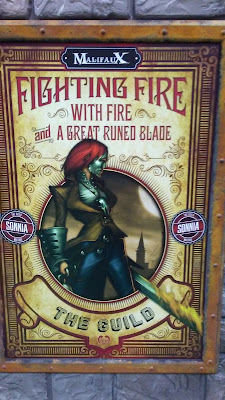 Nellie: Guild Funds give Nellie more things she can do with her evidence condition at the end of her turn, allowing her to dump evidence +2 for healing, Evidence+3 for giving a model Hard to Kill until the end of its next activation, or dropping Evidence+4 to gain 2 soulstones. The last will likely never happen and the third is only situationally useful, so the heal seems like the most frequent. You also gain a trigger to df/wp that gives her more evidence and gives her the ability to let you count a death from conditions near you as her kills for strat and scheme purposes. Embedded is the infamous “hire four mercs and don’t pay the merc tax” upgrade. It also puts a couple of triggers to add more utility to her Hot off the Presses attack. I like the Misleading Headlines upgrades, which gives her the very powerful Incite (0) action and lets her lower her evidence or discard cards to pass activations (no more out activating us, jerks.) Probably the upgrade I would use most frequently is Delegation, which gives her a Tactical Action to pass out Fast to friendly models and, at the cost of lowering her evidence, place a scheme marker in base to base with them or heal them. Finally, there’s a Journalist upgrade that makes all other journalists within aura 8 have an attack trigger, transparency, to drop scheme markers after succeeding.

Generals: Phiona’s upgrade gives her a + to damage flips when hitting models which have already activated, emphasizing her “activate me late” modus operandi. Captain Dashel gains a (1) ap cast action resisted by Wk to summon a Guild Guard in base to base with the model (a resisted summon spell? Weird) and puts a couple of triggers onto his pistol for critical strike or a tome trigger to discard an enemy scheme marker and push the target. The Executioner gains Ready to Work which gives him +1 wk and the ability to discard the upgrade when it declares a charge and take it for (1) ap. Curfew may as well say “take this when playing Gremlins,” as it allows you to give slow to all enemy models which haven’t activated when your crew has no one left to activate. It costs you the upgrade and a soulstone, but taking away that advantage for a turn could be pretty helpful I’m thinking. Numb to the World may as well be a Papa Loco upgrade, as getting to ignore conditions and being able to discard a card to keep your opponent from Obeying him to explode would be very valuable to him. Otherwise you'll have to chose if its worth the cost to protect your big beaters from these. Finally, A Debt to the Guild is the Guild’s answer to Show of Force. If the model with the upgrade is killed or sacrificed, you add a Soulstone to its pool. Also, once per game the model can draw a card at the start of its activation and deal an additional point of damage with all of their attacks. You don’t discard the upgrade, so it stays in play for the game. Nice.
Posted by AgentRock at 5:53 PM