Wyrd has really put their best foot forward in 2021 with the reinvigoration of their product lines. Malifaux Burns has launched the title system, giving options to our new masters and putting a new enforcer in every keyword. They’ve breathed life back into The Other Side with a new starter set. They’ve brought some fantastic content to Through the Breach, including the Neverborn supplement From Nightmares. They even put out another board game, Bayou Bash, which I’ve likened to essentially playing Mario Kart with gremlins. I contend, however, that the most innovative and potentially best thing that Wyrd has put out this year is their brand new board game that releases this month, Vagrantsong. 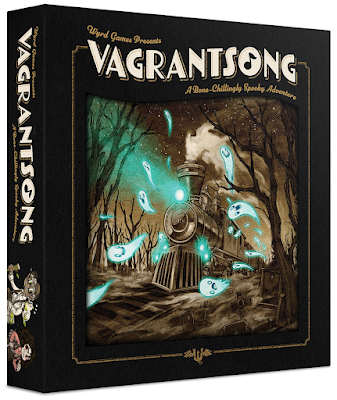 If you follow Wyrd’s social media presence, you’ve probably heard the buzz around this game growing. Several influential board game reviewers have given it the nod. I can say that everyone I’ve talked to about it has enjoyed playing it. It’s a game that, according to designer Kyle Rowan, has been in the works in the Wyrd studios for several years now, and so far it looks like that was time well spent.
In Vagrantsong, the players take control of a handful of old-timey transients (you know, back when being homeless was charming rather than cripplingly depressing.) Your crew of gold-hearted miscreants were beckoned aboard a train by a strangely noodle-armed hand and inadvertently wandered into a spooky adventure. This train is haunted, you see, by a series of Haints. What’s a haint, you ask? (Ok, first you probably make an immature joke about something that rhymes with Haint. I’ll give you a minute to get it out of your system. We good now? Ok, back to the review.) The Haints are powerful ghosts, drained of their humanity and trapped on this train as it travels the world. And that’s a problem for your crew of vagrants, you see, because you’re kinda-sorta trapped on this train with them.
If you’re gonna get out of here with your skin intact (literally) you’re going to need to restore the humanity back to these Haints and find a way to escape the ghost train. Luckily, the vagrants represent a broad pastiche of old-timey humanity, ranging from the more mundane in the form of a failed revivalist preacher, a plucky orphan and her pup, and a travelling musician, to some more eccentric characters like the Cursebearer who gets stronger the more she’s afflicted by the Haint’s villainy and the self-proclaimed Empress of America, whose can-do attitude can overcome any obstacle put in her way (or so she believes.) Opposing them are a series of bizarre spirits. Some are truly chilling like the Lady in White or the Turned Faces. Some are a bit sillier, like the one that is basically a whacky-inflatable-arm-flailing-tube-man. Each brings a variety of unique challenges and obstacles for the vagrants to overcome on their way to restoring the Haints’ humanity. You do this by exploring the train, finding objects from the Haints past, and occasionally punching them in the nose (because nothing will remind you of being human like getting punched in the face, apparently.)

Mechanically, it’s a cooperative game where you face down the Haint, who is controlled by draws of tokens from a bindle (naturally) that determine which of a series of pre-determined actions the Haint will take. One of the coolest parts of the game is the Event mechanic. A series of Events will occur when particular things occur during the game. Some of the events are helpful for your vagrants. It feels like more of them make things worse for them, but that could just be the experience of being a player. One thing is for sure, it’s always interesting whenever a new one comes out. An event can be triggered by something your characters or the Haint accomplish or at random when the right token is drawn from the bindle. They all raise the stakes and create a narrative beyond the mechanics of the scenario. The game itself operates with the vagrant assigning their 3 action tokens to move, search, fight, or take one of the special actions. When a dice roll is required, the game includes an exploding-sixes (or booming box cars) mechanic, which allows for spectacular successes that are sure to elicit a cheer from the players. Then the haint takes their turn, controlled as previously stated by drawing a token from the bindle and resolving the action as listed in the scenario booklet. Difficulty scales with the number of players, with the amount of humanity that must be restored to the Haint going up with each one. Oh yeah, and every time you knock the Haint’s health down to 0 it usually freaks out, does some kind of special action, and then refills its health until you’ve pushed it to the threshold a number of times defined by the scenario. The vagrants certainly have their work cut out for them.
I could go on and on about the mechanics, but let’s talk about the production value. This game is flat out beautiful. The board itself is a fairly simple set of three train cars connected by bridges, though each scenario typically includes a number of obstacles and terrain to set up before hand to make the game unique. The real stars of the show are the enamel figures of the vagrants and the Haints, as they’re both sturdy and attractive on the board. The art style is a good mix of cartoony and legitimately spooky (the first Haint, the Turned Faces, wig me out for whatever reason). The tokens themselves are mostly punched out from sturdy card stock. The scenario booklet is HUGE. I mean, there are a lot of scenarios in there. It plays like a choose-your-own-adventure book, so you likely won’t go through every scenario every time you play, but that also creates some interesting replay possibilities where a new crew of vagrants may follow a different track through the train based on their choices and whether they’re successful or if they all lose their humanity to a particular Haint.

In between games, your vagrants make camp somewhere on the train (I assume) and are met by a ghostly cat who offers you a choice of new skills and lets you buy some new equipment. The players can also spend some of their in-game currency to conduct a séance and get an advantage for the next game (usually a good idea). The currency is earned by completing the scenario itself, as well as through the completion of rituals, sort of side-objectives which can sometimes restore a big chunk of humanity to the Haint as well. And it’s at this point the vagrants can either save the game (write down their skills, equipment, and progress and put the game away) or continue on into the next scenario.
I really can’t overstate how much I like this game. I’ve been burning to put a group together to do a playthrough since getting it from Gencon, but real-life concerns have delayed that. I did get a chance to play through three of the scenarios, though, and I can tell you the challenge climbs as you move along (hoo-boy, when you get to the Lady in White…well, no spoilers, but bring your warm coat.) It’s worth the investment if you can pick up a copy. I have a feeling Vagrantsong’s going to be earning a place not only as Wyrd’s best offering of the year, but maybe one of the best games released in 2021, period. I wouldn’t be surprised at all to see it in the running for an Ennie next year, and I really hope it creates an opportunity for expansion packs in the future (new vagrants, new Haunts, a new mini-campaign, etc.) Wyrd deserves a hearty handshake for what they accomplished with this game. Just make sure the hand shaking yours isn’t strangely floppy, or you may find yourself climbing aboard for a ride as well.
Posted by AgentRock at 9:24 PM 3 comments: