The Other Side of Gencon, 2021 Edition

We’re a matter of days from the greatest four days in gaming, Gencon. Excitingly, Wyrd miniatures will be taking a great step forward at the show, offering a significant number of new models and options for one of their games, which is very exciting to me. The options are going to increase significantly, bringing new models and new tactical options that should refresh it and give it new life.
Oh yeah, and Malifaux is gonna have some new stuff coming out too.
I love The Other Side. It’s a great game that marries the scale of an army game with the action economy of a skirmish game. I like the armies that are in it, and I like the way it plays on the tabletop. So I’m excited for all of the new stuff that will be coming for it and thought I’d compile it here. Before I get to that, though, if you’re going to the show you know that Wyrd’s selection of tournaments and play events is more limited this year than in the past due, of course, to COVID 19 safety concerns. There will be, however, a selection of quick play timeslots when anyone ca come in and use the terrain to play a pick-up game. I intend to spend a good amount of my time there with a couple of Malifaux crews, trying out the new master titles, and with my ToS King’s Empire Force (likely with some Guild reinforcements, naturally). If you’re interested in a game, hit me up on Facebook or just look for me in person. I’m happy to get in some reps.
***
First of all, we know that Sonnia Criid is the Guild commander. She is a ranged damage master that provides a good amount of damage through blasts and some terrain control through the ability to drop pyre markers that block off a whopping 120mm diameter circle of terrain. Interesting that she seems to have more fire magic at her command on this side of the Breach, since the lore says that magic is weaker on Earth than on Malifaux. You almost have to assume that means she’s pulling her punches in Malifaux, and who knows what she’s truly capable of now. 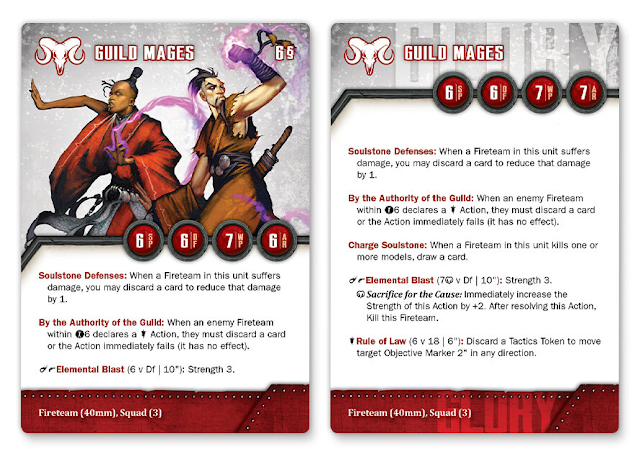 Coming with her are two new units: the Guild Mage and the Gatling Gunner. The mages offer an interesting sort of disruption by forcing opponents to discard to perform morale actions near them (recall that the interact action required to score points in most games is a morale action.) They’re pretty soft, though, with an armor of 6, so survivability is somewhat limited. To correct for this, they have soulstone defenses, the ability to discard a card to prevent wounds. I don’t know that I’d count on that to keep them alive under a sustained assault, but if you’ve got the resources it can keep them alive to do their job. I think they’ll do better paired with Abysinnia’s forces than the King’s Empire, as they have access to more card draw. That may be true of the Guild across the board, frankly. 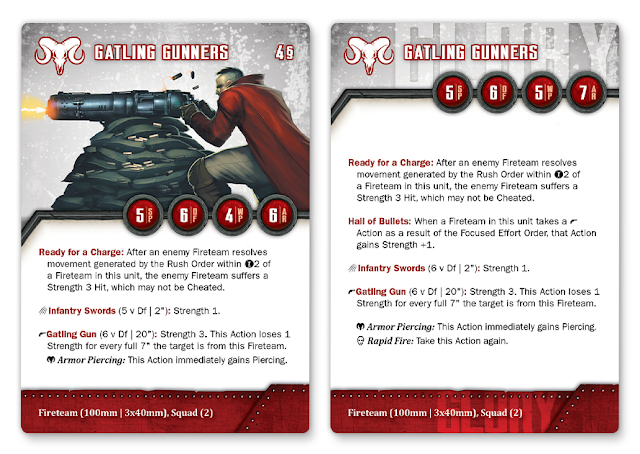 Gatling Gunners are, unsurprisingly, strong looking ranged support models. They do more damage the closer you get to them, but can at least try and put some damage on infantry that’s up to 20” away. They also can punish units that resolve the rush order near them, simulating the effect on the battlefield that this type of weaponry had when introduced to our world, as well. I think they’ll do better if they’re kept back and screened, as they are fairly squishy, but I’m interested to see them in action and find out what they can do. 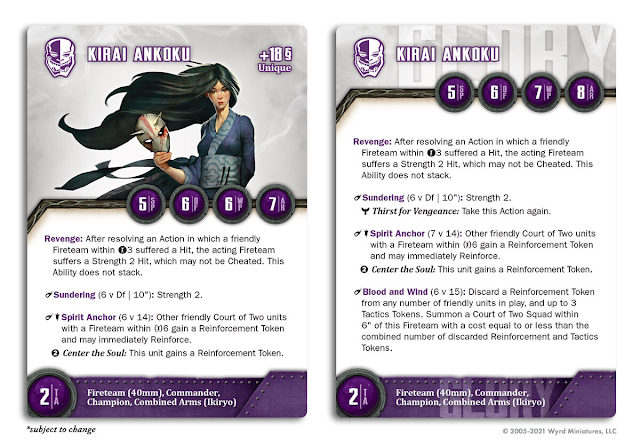 I feel like, where the Guild may be ok standing on their own, the Court of Two models will shine more as support to either the Cult of the Burning Man or the Gibbering Hordes. Neither Kirai, the Gwisin, or the Enslaved Spirits scream “damage potential” to me, though the Gwisin’s ethereal viscera could get nasty on later turns and the Champion Binh Nguyen is no slouch. Kirai’s Spirit Anchor action lets her spread reinforcement tokens around to nearby units, which are important to her and her CoT models to get to glory but also very helpful for allied units. The Horde, specifically, has a number of units that benefit from reinforcements, not the least of whom is their Titan. And anybody who tries to mess with her or the Gwisin has to deal with their Revenge ability, which hits you back with a strength 2 attack that can’t be cheated every time you hit them (note, NOT every time you wound them.) My KE gunlines are not looking forward to that interaction, I can tell you. When she gets to glory, she also gains the ability to summon, which is very rare in ToS. 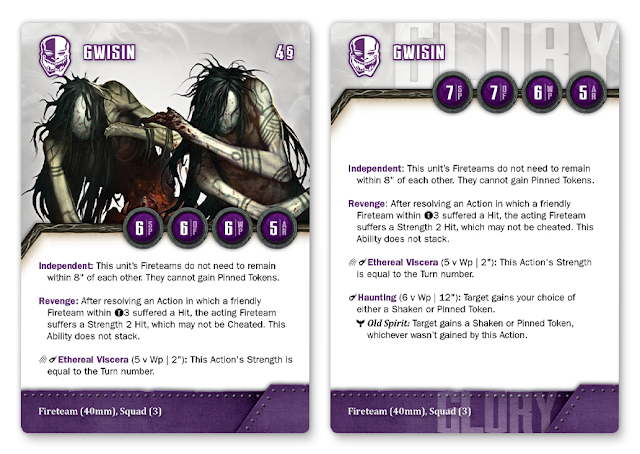 The Gwisin are unique, in that they don’t have to stay near each other on the battlefield. As mentioned, they have an attack that gets stronger as the game goes on. If they get into Glory they can pass out Shaken or Pinned tokens. If you can get there early you could potentially help cult units get into glory as well, though that feels inefficient. More likely you’ll want to counteract what the enemy is doing. 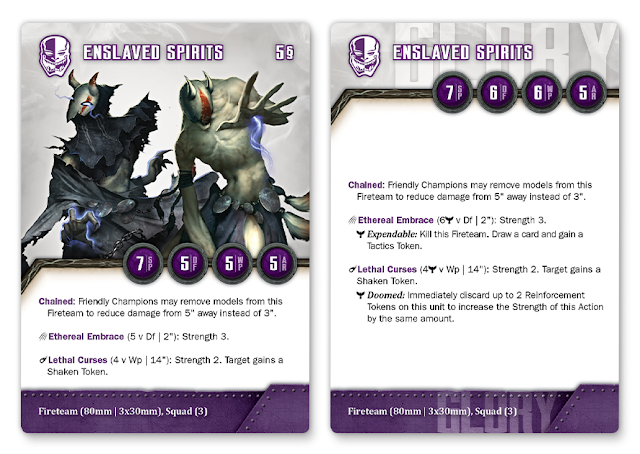 The Enslaved Spirits don’t offer a lot in the way of combat ability. Their utility comes from two fronts. For one, they can be removed through the champion ability by units that are 5” away rather than 3, which gives you a little more flexibility in maneuvering them. Second, their lethal curses ability lets them throw out Shaken tokens at the start of the game, so they can boost the cult up and then hurt the enemy later. In Glory they’re even nastier with this, as they have a built in trigger to strip Reinforcement tokens off their target when they hit, before doing the penetration flip. Very rude. 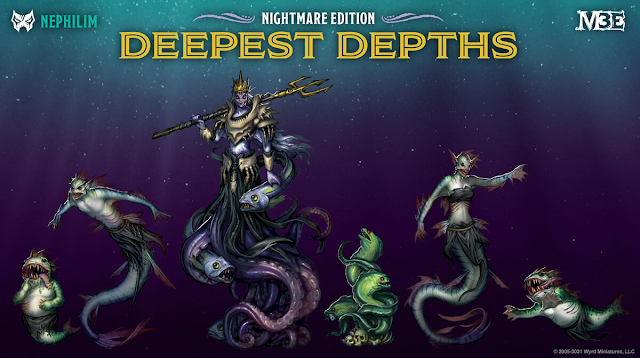 As a bonus, we also learned that the Gibbering Hordes are getting a nice new treat, The Other Side’s first Nightmare Edition box. Yeah, sure, it’s a Malifaux boxed set too, but let’s focus on us :P. The Deepest Depths boxed set represents the Gibbering Hordes’ Storm Siren commander and comes with models that count as Egg Clutches and Morphlings. They’re on the same sized bases as Malifaux, so you can swap the models back and forth between the games no problem. They’ll be a good start for anyone looking to get into the game, though I wouldn’t say you’re going to have much of a fighting force without picking up some more units. The Gibbering Hordes Allegiance Box would be a better option in the long run, but this box will give you some style that’ll make your force stand out.
Posted by AgentRock at 12:34 AM No comments: