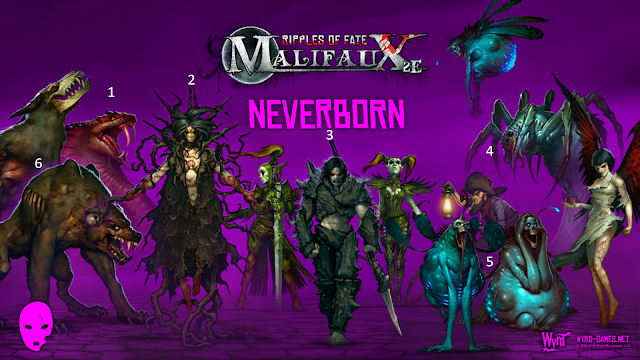 I'm back home from the convention, so I should be able to crank these out sooner. If you want to order a copy of the book, make sure to get it done today before the webstore closes pre-orders.

1.   The Gorar: Titania’s totem is a symbol of death and rebirth among the Fae (note the egg that the snake is cradling in its coils.) Its main function is to get to the center of the board (within 6”) so that, if a minion you care about is killed, you can sacrifice the Gorar to resummon it. This is important, as the knights and Rougarou are all minions and this is a way to protect them from being killed. It has unimpeded to help it get there through terrain, which is good because it doesn’t have much else in the way of defense. Its melee attack creates a scheme marker and does a little damage and its ranged turns a slow condition into paralyzed (this will make more sense in a moment,) but that’s not why you would be taking it. It’s going to attract a lot of fire and you'll have to work pretty hard to protect it, so I’m a little worried how much use this model will see when Primordial Magic exists.

2.       Aeslin is the Dryw (old English for Druid) that serves as a sort of major domo for Titania. She has Curse of Autumn (as do the knights) which force targets that begin their turn engaged with Aeslin to make a TN 13 WP duel or become Slow. She will get less use out of this than they will, I would assume. She’s a spellcaster with casting expert and the ability to dump a scheme marker to fire into combat without randomizing. Her two attack actions are the same A Wicked Silence melee as the Gorar, but you’ll more often use the Rot and Rend ranged spell. It has no TN, Ca 6, and a pedestrian 2/3/4 damage spread. The real strength of this spell comes from triggers, which can discard scheme markers to do more damage, drop another scheme marker with the ubiquitous A Trophy for the Queen trigger, push a model, or hand out slow. Her (0) actions can either inhibit the opponent’s casting flips or prevent them from moving, pushing, or being placed within a short range. Overall, Aeslin is a short range caster with ok damage and some interesting triggers. I question how much staying power it will have in the crew, but Titania’s ability to tank for her should help.

3.       Tooth, Claw, and Thorn: The three autumn knights are essentially the same theme with variation. The front of their cards are the same, with ok defenses and stats, hard to wound, armor+1, and curse of autumn. All of them also have the (0)AP tactical action A Clear Path to push towards scheme markers within 4”. The differences come with their attacks and their challenge actions. The tooth has a melee sword which automatically drops a scheme marker as a trigger and can hit a different one to get a + flip to damage. Her challenge forces an opponent to move into base to base with the tooth, gives them a free attack at a -, and then gives her a free attack back. The claw (possibly my favorite) has a spear which works as a ranged or melee attack, has the same triggers as the tooth but with the other trigger built in instead, and has a challenge which pushes an enemy model into base to base and can, with a trigger, give them a – flip to defense for the rest of the turn. Finally, the Thorn lashes you with vines that do slightly worse damage but has the + flip to damage trigger built in as well as a separate trigger to let you draw a card if the enemy is close to a scheme marker. They seem tough but not quite as tough as Illuminated, but they’ll probably be necessary to get scheme markers out for Titania.

4.       Bandersnatch: This creature is cool. It’s a Rare 1 Nightmare minion that jumps into your shadow and can attack others from there. This is represented mechanically by the (0) Crawl Into Shadow. If successfully cast against a target, the Bandersnatch buries itself and places an “upgrade” on the target which does damage to it every turn and allows the buried Bandersnatch to use it as the origin point for its attacks. In effect, it acts like the Bandersnatch is attacking out of the shadow at other enemy models, which then allows it to drag the enemy models into melee with the poor sucker and even has a trigger where the second model might attack the first one out of confusion. The 2” melee range of the Snatch is increased by the height of the model. The “upgrade” falls off after the second time it ticks on the original target for damage, so it will be important to activate the Bandersnatch right away to jump back into a shadow and avoid getting hit back, but I think this model is very cool and thematic.

5.       Will o’ the Wisp: These guys are rare 3 spirit swampfiend minions that are incorporeal but also insignificant. Any model that fails a WP duel within 3” of them lets them place a scheme marker in base to base with the enemy. Their attack isn’t very good, but with a cost of 3 they’re not really expected to hit hard. You’re really taking them for 2 reasons. One is The Wisp’s Call, a ranged spell that places a condition on the target which forces them to take walk actions toward the wisp with one of their AP and prevents charging. It has a possibility to disrupt enemy movements, but seems somewhat situational. They also have a tactical action to use a (2) action off of another Neverborn model within 10” for (1) AP. The immediately obvious use is to summon Voodoo dolls for Zoraida, which allows her to use her AP for other things. There is a lot of careful wording to make sure you can’t abuse this (you can only target a single model one time with this per turn and can only be taken once by turn by the Wisps) but could, over time, end up becoming even more useful as new models are released. I'm interested to see these guys in action with Pandora, Zoraida, or Titania for three entirely different reasons.

6.       Rougarou: If you watch Supernatural you already know that this is a sort of wolf creature which, inexplicably, all the recurring characters are always off hunting to explain why they aren’t in the episode. They’re 8ss fae/beast/undead minions (so hurray for Marcus, I guess.) They’re melee beaters that don’t have a ton of resilience off the card. Hard to Kill is decent, but they could really be scary if they had been given Hard to Wound as well like the rest of the knights. Instead, they have the ability to eat a scheme marker within 3” at the start of their turn to either heal 2 wounds or push 3”. Their claws have a high severe damage and a ram trigger that gives the damage flip a + so its more likely you can cheat for it. Its tactical actions are a pair of (0) actions that either force a target to make a TN 13 WP duel and, if it fails, gives the Rougarou a free melee attack or can push all enemies with pulse 4 into base to base with the Rougarou if they fail the same WP duel. There’s also a fun trigger on this action which lets it jump into base to base with one of the model who succeeds the WP duel after the others push in. Not sure how strong this one is, since it may be a bit too fragile to stick around. There are probably better options at 8 points.

Upgrades: Titania-The Queen has no limited upgrades, so they can be used in whatever combination you prefer. One puts a mask trigger on all of her attacks which forces an enemy to discard cards to target anyone besides Titania. Another gives her the ability to place an enemy model into base contact with her and can place a scheme marker with a trigger. Both of these add to her ability to tank for her crew. The Forest Claims All seems like one which should be used in most games, as it allows her to change all corpse or scrap markers placed within 4” of her into scheme markers unless the opponent discards a card. This seems good for not just disrupting Rezzer, Ten Thunders, and Aracanist summoner crews, but also for getting scheme markers for Titania when the opponent doesn’t care about those markers at all. Finally, The Queen’s Champion is an upgrade which you place on Titania until one of her models kills something. The upgrade then jumps to the new model and grants them Armor+1, a + flip to attacks, and placing a scheme marker every time they damage an enemy. This one seems most likely for me to leave off simply because the cost of controlling which model gets the upgrade (discarding a soulstone if you don’t want it to jump) is pretty high, and I don’t like things I can’t control directly. The general Fae upgrade gives them a 10” aura which grants all Fae the ability to, with a trigger that is built in for the knights, discard a scheme marker and push 3”. This one might also get left behind unless the knights really get a lot more use out of it in play than I'm imagining.

Generalist-Lelu gets Satisfying Punishment, which increases his DF+1 and gives him an ability to deal itself 1 damage at the end of its turn to cycle a card. Iggy gains a melee attack with a 2/3/4 damage spread and the Hide in Shadows trigger. The generic upgrade A Thousand Faces has to be used on a Non-Master and is Rare 2 but allows a leader to take a (1) action if the model with the upgrade dies and may be swapped out for a different upgrade at the start of its activation (paying the difference in soulstone cost, if its higher.) If you choose to switch to Pact, you also get to draw a card. I think I like the other upgrade, Malifaux Provides, better (although I suppose you could always start out with the first one and then switch to the second one when you need it.) It allows a model to discard a scheme marker within 3” to heal 2 and, when the model would gain a condition, allows the model to ditch the upgrade and ignore it as well as drawing another card. Now that I think about it, you may as well start with the first one in case the enemy does something you don’t expect and kills a model early on, but then later switch to the second or any of the other Neverborn upgrades as you feel necessary. 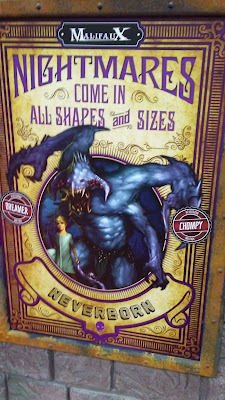 Posted by AgentRock at 2:27 PM