Hello all.  I figured I would give Adam a hand with a couple of these so you can get them faster.  And seeing as how I already faced Sandeep at Gen Con Avatars I may (but probably not) have better insight. 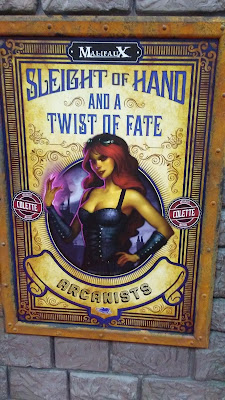 I will start with Sandeeps upgrades.  Sandeep has two limited upgrades available both of which allow him to summon gamin.  The difference between the two is that one lets you paralyze your target if you do moderate or severe damage, and the other increases his damage profile to 3/4/5. His summoning mechanic involves attaching upgrades to the gamin that are summoned.  There are six rare 1 gamin upgrades tied to each of the limited master upgrade.  Sandeep must attach an upgrade to summon so he can only have plus 3 models over what he started with at any given time.  All six upgrades buff and debuff the summoned gamin in different various ways.  One set of three are scheme and interact related and the other three are combat oriented.  An example would be this gamin may not be moved or pushed (which I assume includes walk and charge actions along with effects from other models) but gains an aura that makes the enemy discard 2 cards to interact or the action fails.  If you only use the upgrade to summon Banasuva I still don't think you put Sandeep on the table without one of the two.

He has two other upgrades.  Enlightened Soul allows Sandeep to draw a card once per turn if he kills an enemy model.  And there is a cast that hands out incorporeal to other models until the end of that models next activation. Just what a nimble Howard needed...  The other Unaligned Sage allows him to hire in model with the academics keyword from other factions.  And there are two 1 AP tactical actions.  One will let you draw a card once per activation if an academic discards a card (so things like flurry but there is a call out it doesn't work for cheated cards).  The other turns on a 6" aura that make academics not randomize.  Both seem useful depending on the crew build but not auto include by any means. 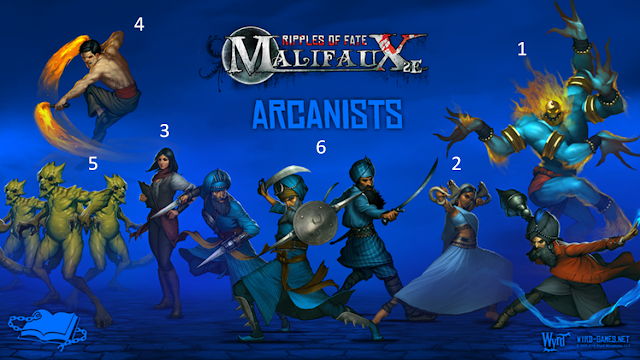 1. Banasuva.  An 8SS rare 1 minion totem that is summon only (cost is there to set the summon TN).  This thing has melee expert and hits like a truck (3/4/5).  It has the Ice Golems toss ability and a zero action to copy an ability or action from close by friendly gamin (editor's note: see also Armor +2 on Iron Gamin.)  It has 8 Wd's, Df 6, and Wp 4 and no other defenses so it can be a liability for hunting party but outside of that I don't see this master without this guy on the table at least once.

2. Kudra.  A 7 SS rare 1 academic henchman.  She has a few neat abilities on the front of her card.  Butterfly Jump, a Df/Wp (built in) trigger to draw a card once a turn if hit, once a turn spend a SS and discard a card to add the SS back, and 4 melee attacks on a charge (too bad the spread is 1/2/3 and 1 poison or this might be awesome, but I do see it being good against high armor or something with high Df with 1 wound left).  She has a ranged cast with a gun icon, Elemental Bolt that has a few triggers.  She also has an upgrade that give her various buffs if the elemental gamin are in range, and a 0 action to sac a gamin (I assume to free up an upgrade of kill denial ((Editor's Note: Also, to sac and resummon Banasuva with a different one of the negative upgrades attached or in a different position.))).

3. Amina Naidu.  A 9 SS rare 1 M&SU, academic henchman who is essentially the M&SU's injury lawyer.  If she suffers damage from an enemy attack action she can push it 2 inches (potentially out of range or LOS) by discarding a card. She has a 6" aura if an enemy interacts she may discard to add 1 SS.  Another aura of the same radius allows her to put an attack at negative if its targeting another wounded friendly model by Amina suffering 1 Wd.  A cast that hands out slow with a taunt like trigger.  A collier pistol.  A 12" pseudo lure with a trigger that prevent the target from attacking things with less Wds then the models Wd stat.  She also has 2 zero actions.  One is Ca v Wp take 4 damage and may reduce by 2 for each card discarded with a trigger to take the next 0 action.  Ca v Wp of gain Peon and may not take interacts action for the rest of the game or until Amina is killed or sacrificed.  She seems like a very annoying control piece and to get the most work out of her you are going to have to understand what she is in the list for and remember her auras.  She is definitely not a model to just drop in a list and go.  I would recommend playing some small friendly games to learn what she can and can not do.  Models with a lot of text will slow down a game if you don't have a decent grasp on all of the various interactions.  But once you unlock her she might turn out to be a cross between a lawyer and brewmaster.

4. Carlos Vasquez.  A 9SS rare 1 showgirl henchman.  He comes with smoldering heart.  An ability to treat burning like armor (up to +2), may push pyre markers after a walk action to cause Wk duels and avoid the damage.  And he gains burning +1 after resolving initiative.  He comes with a decent 3" melee with built in triggers (all 3 need 1 tome).  Give burning +1, do extra damage equal to the burning on Carlos (up to 3 damage and ending the condition), or add burning to Carlos.  Zero action to place a 50mm pyre marker until end of turn, or a zero action 4" push and add burning +1 or trigger to remove it.  An interesting model and probably play fine as a solo model but he will probably do better if there is more burning in the crew.  He also has an upgrade to heal from burning at the end of the turn.  And it also has a 1 AP blow up a scheme marker to pulse burning +2.

5. Poison Gamin.  A 5SS minion.  1 more wound than the typical gamin but more or less function like the rest of the gamin.Melee attack to deal 1/2/5 and grant them Poison+1 with a built-in trigger to do additional damage to targets that are already poisoned. It pushed 3" at the end of its turn if it took an attack action and heals a point of damage instead of taking damage from poison. Their ranged attack does not that impressive damage and has the infect trigger, but not built in (odd.) As a (0) action they can turn on a version of McMourning/Sebastian's ability to tick a point of poison off if they activate within 4" of a poison gamin. I'm not confident enough in the rules to know for sure, but I suppose you could put multiple poison gamin together to tick multiple poison damage on a turn. It's resource intensive and easy to disrupt, but I know that one criticism of Kudra was that her poison is less effective without these mechanics in place in the faction, so that's not ENTIRELY true.

6. Shastar Vidiya Guard.  An 8SS enforcer.  The model can draw a card if it cheats a Df duel once per turn.  When it activates it may discard for focus +1. and comes with hard to kill.  Also comes with a 2/4/6 melee with a trigger on every suit. A weak Rg 10" attack with a built in trigger to hit other targets (that were not targeted by this attack once per activation) in range and Los. ( I see this working good with Raspy.)  and a zero action to push another friendly model within 6" up to 2".

The generic upgrades seem kinda meh to me but I'll cover them and let you decide.
-Circus Bear.  0 SS - Gives the slate ridge mauler +1 Wk and +1 Ml and a 0 action Ca to push 2"  with a trigger to use a second 0 action.
-Temporary Shielding  0 SS - makes 3 Oxfordian Mages cost 15 ss instead of 18 and you can discard the upgrade and a card to reduce damage it suffers by 2.
-Well Rehearsed. 1 SS rare 1, enforcer - when a scheme marker is placed within 3" the model may push 2".  When a friendly living model within 3" is killed, you may discard the upgrade to leave the model alive with 1 wound.  (I don't see this replacing imbued energies unless you somehow have 3 on other models and an enforcer with an upgrade slot and SS left over during hiring... so not likely).
-Blade and Claw.  1 SS rare 1.  requires you hire a beast and a construct in the same list and it lets them swap places as a 0 action.  (I'm not sure this is worth the ink used to print the words on this upgrade.  But I'm certain there will be one person who thinks its the coolest thing since sliced bread.).

I have the ten thunders review and then I will have an origins/gencon super tournament report (including my match verse Sandeep).  I didn't snap pics of the posters so maybe Adam will edit it in and post it to the guild one he is doing next.  I hope to have the thunders done tonight. (Editor's Note: Done and Done.)
Posted by Unknown at 8:32 AM