Quick Hitter: The Lone Swordsman is an underrated champion of the Ten Thunders 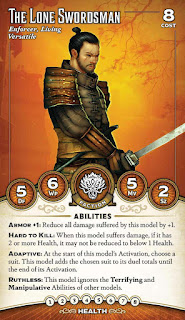 As a Ten Thunders player, there are no shortage of fine versatile model choices available. For 10 stones, Yasunori can get just about anywhere you need him to be and deliver some serious hitting while being obnoxious for the opponent to remove. The Shadow Emissary is a versatile model that can create concealment, let you reshuffle a bad hand, flies, and delivers a nasty 3/4/5 damage spread bite. The Dawn Serpent has been gaining popularity of late (read: I’ve been hearing about it more in podcasts) due to his versatility, hitting power, and self-reliance. Samurai are the only anti-armor tech we’ve got and can serve as gun platforms that can infiltrate when paired with Trained Ninja or be very strong bodyguards with Silent Protector. It’s possible there are TOO many good choices (I hear you crying out there, AWP).

But lost in all of that is a model that I think is somewhat underrated, the Lone Swordsman. It’s possible this is due to some of his value not being immediately apparent at first glance. But more and more, he’s finding a way into my crews, led in part by prodding from Phiasco. Part of it initially was due to nostalgia, I’ll admit (if our Wandering River Dojo had a mascot outside of the titular monks, he’d be it, given how much we used to put him on the board.) But there’s some hidden power under the surface of this model that lets him pull more than his weight, particularly for his cost. And as Ten Thunders players, isn’t hidden power the best kind of power?

As a pure beater, he’s not likely to keep up with Yasunori or his ilk. His defense is only 5, which doesn’t scream front-line fighter. However, he’s 8 stones, which makes him cheaper than everything I just mentioned above, so you can afford him plus an upgrade somewhere in the crew for the same cost as some of the more well-known Thunders heavies. Armor+1 and Hard to Kill help to make up for his lack of defenses. Ruthless is an ability you don’t appreciate the value of until you play a Terrifying or Manipulative heavy crew, and then it will suddenly become something you look for every game when you’re facing Pandora or Seamus. Move 5 is nothing to write home about either, but he makes up for this with Creep Along, and the Thunders has plenty of other mobility tricks to make sure the LS is where he needs to be. His tactical action Last Breath is vastly inferior to what he used to be able to do (grant himself Reactivate at the cost of dying automatically if he didn’t kill his declared target), but if you absolutely need to bring down an already weakened Enforcer or higher model, doing this in place of charging is probably a good choice. Where he really starts to shine (and where the less-obvious value hides) is in his single attack paired with an ability from the front of his card.

Unsurprisingly, he has a Balanced Sword attack as his only option (he is a SWORDsman, after all.) It has a good but not great 2/4/5 damage track with a trigger for each suit. While I like these in theory (it’s always cool to hit triggers) I generally don’t put a ton of value on this when I see it on a model, because you can’t rely on getting the one you want when you want it. Critical Hit would be nice to make up for his weaker damage track, for instance, but it would stink to only have it one attack out of four. Lone Swordsman, on the other hand, has the ability Adaptive that lets him declare a suit at the start of his activation that is added to each of his duels. This lets you pick what you’re bringing to bear, and that versatility is where the Swordsman really shines. If you’re going in for that big Last Breath attack round, you might want the rams to help spike your damage spread. If you need to delay the opponent or hamstring a key model, crows let you bring some Slow to bear. Horde of smaller models? Quick Reflexes on a mask can let him spread the punishment around. But maybe the unsung hero is Tactical Planning on a tome. Pass tokens are (at least for me) an oft overlooked asset in the game, as I rarely want to use them after the first turn or two when combat is fully joined. Delaying by an activation means letting the opponent dictate the action in the fray, and that can be devastating. However, if you save those tokens up, that can help you to make sure you win the initiative flip on the next turn and get your attacks in before the opponent can respond. This is good in most games, but it’s absolutely clutch for Cursed Idols, as the player that wins initiative determines where the marker lands. I find that I rarely play a game of Idols that the Swordsman doesn’t find his way into my crews for this reason, and he’s usually declaring tomes with Adaptive before each attack. +2 to your initiative when the range of options is 0-14 is a big, big deal. Just ask everybody crying about Shenlong’s Chi tokens.

Anyway, I like the Lone Swordsman, and I encourage you to give him a try in your games. And if you like these quick-hitter style articles, let me know about that as well. I want to get Malifaux Musings back on track, but reduced gaming time paired with some chronic writer’s block has made that difficult. I hope that putting out smaller, bite-sized content like this should help with this.

Posted by AgentRock at 6:03 PM No comments: