Ripples of Fate Review: Gremlins (and some stuff from Gencon) 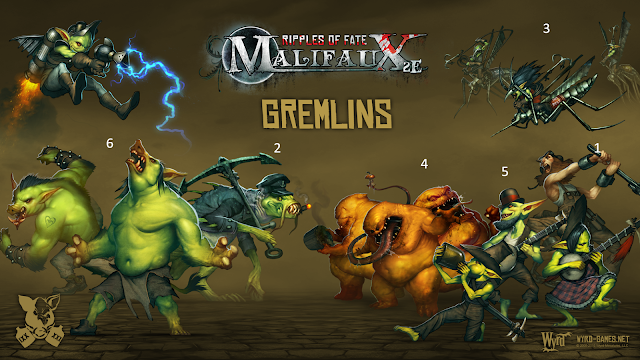 I haven’t had the time I expected to sit down and crank these out, but a promise is a promise so here’s the Gremlins crew from Ripples of Fate. More to come, as you would expect. Enjoy!

1.Earl Burns: Burns was the lead engineer on the Infamy (before that became its name) but has now been forced into slavery by Zipp and his crew, since they don’t know how to fly it properly and would likely have ignited the hydrogen inside and killed them all by now if he didn’t stop them. Earl is a significant minion totem which can be towed along by a friendly pirate similar to Hoffman. He has decent ability to heal constructs with his melee attack or smack enemies, but I think his best ability is Regular Maintenance. For an easy cast and a discard, you can add a suit to all duels for friendly leaders and constructs within 6” of him and, with the right trigger, grant them + to their attack actions. Pretty good totem. He also can grant some mobility to pigs or swampfiends in the list, at the potential cost of a wound to himself.

2.The First Mate: As advertised, he is a Silurid that ate the previous first mate and earned himself the job. He’s a 9ss hench with ok defenses and no defensive abilities to keep himself upright, so he’s going to be a bit fragile. This seems odd, as he seems to want to get in and mix it up in combat. He has a pretty standard melee attack that can poison or turn slow into paralyzed, which comes in handy for his next ability, swallow you whole. If you discard enemy scheme markers within 8” of him he cycles a card.He also has a pretty good maneuvering ability called Menacing Croak that lets you push enemies up to 6” and has some good triggers, including the ability to hand out slow (unless you give the Mate fast, he can’t slow, paralyze, and swallow whole in one turn.) And, of course, he has leap. He seems to be better at maneuvering and positioning than combat, but he still seems a little fragile to me. (Correction: the Mate can slow with a trigger from leap, paralyze, then eat. Card intensive, but possible.)

3.Iron Skeeter: These guys seem pretty good. They’re 6ss enforcers that count as living and construct, so Earl gets to tag along with them. When they take walk actions, they can choose to flip a card and, on anything but a crow, place a ht 5 blocking terrain smoke counter adjacent to them. With Zipp throwing around his terrain counters too, a sky pirate crew might be pretty rough on enemy shooting attacks. Their ranged attack has some interesting triggers that can push the enemy or give them slow, and their melee can throw out some poison or, with a different trigger, attack twice if you’re hitting someone who is slow. I’m getting the impression that getting some reliable slowers into a Skeeter crew will be money. Probably most memorable for them is the (0) action “Hop Aboard” wherein they can designate a ht. 1 model near them and then let them move along with their flight for the rest of the turn. The caveat is that you have to declare a trigger for the ability, and half of them are bad. So you’re taking a risk, but Iron Skeeters can bring some real mobility and utility to even non-Zipp crews.

4. Akaname: Your token brewmaster minion is essentially a filth demon that is an Oni and Tri-Chi and lives in gremlin communities, wherein they eat the pig mess and help defend the town. They have the ability to transfer poison from models around them to themselves once per turn, gain a point from the uncomfortably named “Lick their Corpses” ability when someone drops a corpse or scrap marker, and don’t tick damage every round or reduce their poison condition normally. They gain a bonus to their Ml equal to their poison value (up to +3), can spray poison onto other models by transferring it from himself, and can turn poison on itself into scheme markers as a 0. I don’t know brewy well enough to say whether this plugs a hole for him, but the fact that it doesn’t have a Sebastian or McMourning-esque extra poison effect, so it seems like the most effective use for them.

5. Banjonista: Is what it says on the tin: gremlins that specialize in playing the banjo. They have a ranged attack that ignores armor, which is probably something gremlins need. They are, however, fairly squishy with 5 df and wp and 6 wounds. Probably the most interesting ability is “Pluck the Strings” which lets them apply a Paranoid condition which forces discards or damage in a sort of pseudo-AoE effect and can trigger to allow other Banjonistas to perform their own Dueling Banjos action. Not sure at first blush how much use these will get, as Arcanists can probably squish them before the armor negation becomes a problem, but I could be wrong.

6. Swine-Cursed: So…these are a failed experiment by Wong to combine the strength of pigs with the…intelligence of Gremlins? In actual effect, you get a werepig version of gremlins that can switch back and forth between being either type gremlin or type pig as a (0) action. Which state they’re in changes a trigger on their melee attack. The crow trigger when they’re a gremlin makes it so the target can’t declare walks while engaged, while the ram trigger when they’re a pig lets you get a free charge on another target nearby. Every time they switch states they get a healing flip. And, of course, there’s the fact that they gain the Magical condition at the start of the game which lets them ignore armor, hard to kill, and incorporeal. I think there’s some potential here, but they can get knocked down with a concerted effort from the opponent, so they may not be too dangerous.

Upgrades: Zipp’s upgrades: His two limited upgrades alternate in theme for what you want to punish the other crew for doing. One makes them discard to use soulstones. The other makes them discard to use 0 actions with their master or henchman. They both give an ability to clear conditions off of Zipp, though one requires a card and a soulstone so that would take some decision making in game. And, both let you attach one sky pirate upgrade to an enforcer for free. His rambling diatribe upgrade could be crippling against certain crews, as it lets you name a suit and then force your opponent to discard all cards of that suit and redraw them. They sky pirates seem to have a sub-theme of benefitting from discarding opponent scheme markers (fitting, they are pirates after all.) Treasure map is another example of this, as you get to do a draw and discard to get a bonus from which suit you pitch. There are two upgrades that represent the airship getting involved, one with pianos dropping from the sky and the other with a very bright spotlight. Both have a number of amusing triggers. And, finally, the First Mate can give himself armor by removing enemy scheme markers, and gains a trigger to his leap ability which lets him do that for free.

Gremlin Upgrades: The two “fix old models” upgrades are for the Whiskey Golem and the Warpig. The former gives the Barrel to the Face action a ram or tome trigger to follow up with a free Smokey Finish. The Warpig upgrade A) lets the warpig attach the upgrade like it were an enforcer and B) acts like a super recalled training, letting it ignore Set’er off, gain +2 wp, and a + to all flips for the turn. Scary. The two new generics can make certain gremlins more useful for a pig style crew by giving them pork whisperin. The other lets you reflip for random targeting when shooting into a melee once per turn or, if that doesn’t end up being useful, can be pitched to draw two cards.

At this point, I’ve run the module 3 times, once as a shakedown cruise with my friends on Wednesday night and twice with players here at the convention. It’s gone pretty well, I have to say, and it’s been cool running it at a table adjacent to Mason, the head writer for TTB, as he comes over after the game and asks how the players did and looks for cool moments. The shakedown cruise was a darned good idea, because I found a couple of things about encounters which I had misinterpreted while reading (which unfortunately led to a party wipe, but c’est la vie.) Some stats from the game thus far:

This adventure rewards players who make good use of the (1) Order action to better utilize the mercs, which I also discovered the first time through. The 1st convention group managed to keep the Peacekeeper alive through to the fight with the Hooded Rider and then use its chain harpoon to keep it from escaping in combat, and it’s so beefy that not fixing it is definitely a mi
Posted by AgentRock at 9:49 AM