Extra! Extra! Read all about it! It’s a new Monday Preview from Wyrd!

Named for groundbreaking female journalist Nellie Bly (real name Elizabeth Cochran Seaman,) this new addition to the Guild has quite a legacy to uphold. For whatever reason, the face looks odd to me, but the render of the sculpt has a lot more of that Newsy “Golly-gosh-gee-whillickers” look that is so out of place in Malifaux and especially in the Guild, of all things. Wait, a Guild master that doesn’t just explode everything in sight or stab it with a ridonculous sword? Who’d have thought? I’m excited for this new theme for the faction where I initially started my journey through the Breach. 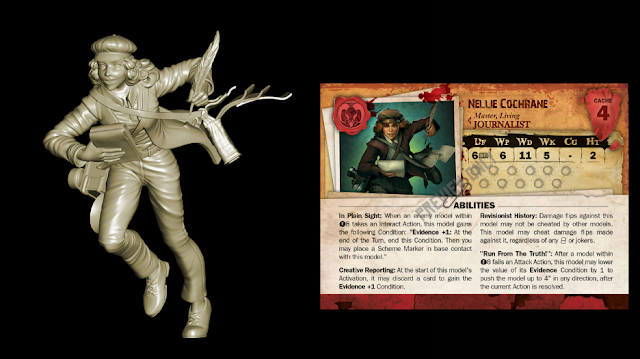 Well, so that’s a tough master, right there. Df and Wp 6, 11 wounds, and Revisionist History to make it so that A) your opponent never gets to cheat a damage flip against her and B) you always get to cheat their damage flip regardless of any negative twists they may have. Wow! Now this is a crew that will be happy to draw their black joker into their hand! She has a Wk of 5 and no charge, so not going to set any speed records, but Nellie seems to want to be playing a support master anyways. She seems to revolve around a new condition unique to her, Evidence, that drops off of her at the end of the turn, resulting in her dropping a scheme marker. Strangely, evidence is a stacking condition (since it reads as Evidence +1) but the condition says nothing about reducing it by 1. So, that seems to suggest that you have more things for which you can use it during your turn, including using it to push models away which fail attack flips within 8” of her. Interesting.

As a Guild master, she’s definitely something new in that she appears to interact with or generate scheme markers and acts through support rather than direct attacks (I’m aware Lucius exists, but, come on now.) I think Nellie’s pretty cool, and I want to see what she can really do. This is definitely one of the masters that’s tougher to gauge based on the front of her card. The blurb in the Monday preview suggests that she uses propaganda against her enemies and incites (note lack of capitalization, sad face) them to mess up in public, manipulates schemes, and even does something with the way the Guild hires mercenaries. Weird! I want more info! But that’s not what we’re going to get, next week we get to see what the Gremlins are getting. See you then!
Posted by AgentRock at 5:08 PM