Episode 69 of Before We Begin featured a Malifaux Addict named Michael who was presenting two lists for the Neverborn faction, one of which approached crew building in a way I hadn’t really seen before. The list he put forward looked like this:

Briefly, the central idea behind the crew was to exploit the Black Blood ability to punish melee oriented crews and spread AoE damage. The Black Blood Shaman could supposedly give the Black Blood condition to both of the twins with one swing of his ritual knife, effectively giving them Black Blood +2. Of course, the next episode they pointed out a specific call-out in the rulebook that neutralized this combo (if a condition and an ability grant the same thing, they count as having 1 version of the ability, not two.Stupid rules, spoiling all of our fun...) Still, it got me thinking about Black Blood and its role in Malifaux.

As I’ve mentioned in previous posts, I like to minimize as many of the random elements from my crews as I can, so there’s some appeal to the fact that Black Blood just does what it does (splash everything within an inch of the model with 1 damage every time the BB model is damaged). In the past, however, I’ve sort of overlooked it as a damage source, treating it more like icing on the cake than something to build around. I considered it a bonus rather than something built into the soulstone cost of the models. The game designers might think the same way, however, as a lot of models that have Black Blood are pretty good in and of themselves. Graves is a very solid beater that also brings some good movement tricks to a crew. Lilitu has some very strong abilities, particularly Lure and her large melee range, that make her worth including in many crews regardless of their content. Young Nephilim are one of the best models for their point value you can buy. And, of course, there’s always Nekima. I think most of us know what she can do when she puts her mind to it, and she even has abilities to intentionally trigger her Black Blood to deal damage over a wide area (50mm bases are big, y’all.) Plus, I remembered how devastating an encounter with Nephilim was in the third chapter of Nythera in Through the Breach. This was one of the only combats in the whole Penny Dreadful that put the players in honest danger of death when I ran it, and it was mainly due to the Nephilim splashing that acid blood all over the place. Of course, the difference between TTB characters and Malifaux characters is that the former does a lot less damage per attack typically, which plays right into Black Blood, but it still made an impression.

So I decided to give this a try. It happened that roving reporter Jon was in town a couple of weeks ago before heading to a tournament, so we set up my Mats by Mars and Terraclips terrain and threw down.

I ran essentially the same crew as above, with the substitution of a Young Nephilim for the Silurid (I didn’t have a scheme where the frog-man would come in handy.) Jon likes combo-y lists and was trying out a TT McCabe where he turned an Austringer’s bird into a ranged napalm strike with a combination of buffs, so I didn’t get a ton of chances to splash them with the Blood. But, a situation did present itself where I swapped Mr. Graves in front of a Guard the Stash marker, facing off with three Guild Hounds who were trying to score it, where I saw the potential in action. Jon looked at one point and said “I could try and hit you, but I’d probably end up doing as much damage to myself as I would to you.” The big bald man put his fence post to work, cleared the dogs off of the post (no marking your territory! Bad doggies!) and that set the stage for the Neverborn to win the game.

I was intrigued and decided to keep things going. A Wyrd Place runs a Vassal League through Facebook, so I signed up for that and entered as Neverborn. I decided to swap the twins out for Nekima and learned another lesson in the first game, namely that Black Blood doesn’t do you any good when your opponent doesn’t have to close with you. I was playing against Wong, I momentarily forgot that this isn’t M1E and an opponent can see all the way through terrain as long as they place a toe inside of it, and I proceeded to get my crew blasted off the board in large part by misplacing Illusionary Forests on turn 1. So, lesson 2 learned: if you’re going to utilize BB, you have to draw the opponent into you or put them in a situation where they have no choice but to walk into it. Screen your crew by putting the terrain in front of you and then making them come close, rather than trying to slow them down with it at range. Lure, Show Ya The Door, and Tangled Shadows are one way of doing this, but it’s better when you can set your opponent up so they have to do the work for you.

And that brought me to Game 2 of the Wyrd Place League. It was Extraction and it was going to be played on this map: 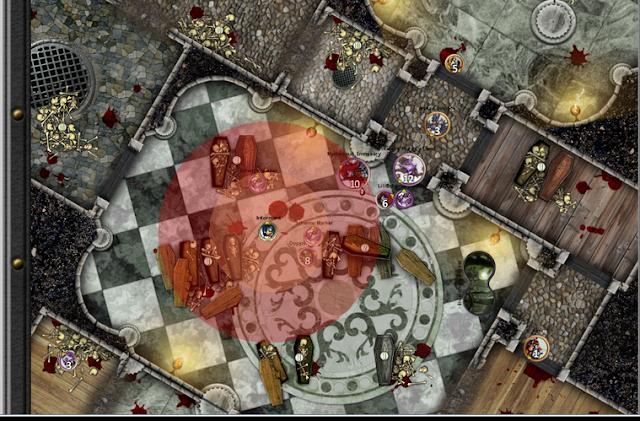 Seeing the restricted access the top of the map had to get to the Extraction Marker, and knowing that my opponent was not playing Resurrectionists (meaning they would likely have limited access to Incorporeal) I decided to take what I had learned from Black Blood and combine it with the terrain control crew I had written about previously. So, I fielded this:

I won the deployment flip and took the bottom of the map, as planned, and completely jammed the opposing crew up in the top-middle doorway with two hungry land markers for the entirety of the game. Lillith’s long range for summoning Illusionary Forest made it less necessary to have the Waldgeists for controlling the side doors (Hungering Darkness came through the left, making the trees useless there, but Yin tried to run around the right side later in the game, and I managed to flip the trees across the board to block it without having to get out of position. Again, the Black Blood wasn’t a deciding factor in the game, but it helped a couple of times. Nekima splashed it on Hungering Darkness to soften it up, and at certain points I set up situations where the Hungry Land markers could trigger black blood and splash it onto opponents (which is great, until Lillith does it and the opponent flips the Red Joker. Hurray randomness!) It helped that my opponent had built to counter Pandora rather than Lillith and hadn’t foreseen the terrain jamming as a tactic, but I have to think that would be a rather common occurrence in this situation. Pandora was my first thought when I saw the board as well, as her 6” death bubble shtick would be pretty effective in the Turf War-esque strategies (we were playing Extraction.) Plus, I'm well aware that most boards aren't as closed off as this Vassal map, but still, I feel like there's potential here.

So, conclusions from what I’ve seen so far. Black Blood can be crippling for an opponent’s crew, but only in very particular situations. High minimum damage crews avoid it by not having to trigger it frequently. Ranged crews get around it by…being ranged. And high wound models might not even notice it’s happening. So, it's most effective against models like scheme runners who have a low pool of wounds to begin with and have to come to you, and can be pretty useful as a kind of poor-man’s blast damage. Everyone who has softened up a 9 DF Perdita by blasting into her from the friendly model standing near her knows how effective that can be. Also, it's most effective when the opponent has to come into close contact with you. Engineering the battlefield can help create these situations, so I think there are some real possibilities to be found in combining the Black Blood and summoning Hungry Land, Illusionary Forests, and/or Waldgeist Trees. And, as a side lesson, perhaps the Mysterious Emmisary’s sub-optimal reputation is a bit exaggerated, or is one of those things that looks to be true in Theory-faux but doesn’t prove to be true on the board. Admittedly, this is one game, but considering that it basically won me that game single-handedly, I think the model at least has potential in some specific scenarios.Part of the negative reaction, I think, is that Neverborn are typically all about moving rather than playing standing defense, so the ME is a very different tool in their arsenal. I'm curious to try it on A) more open maps and B) strategies where the opponent doesn't have to come to a central point to see if it can be effective there as well. More testing is required.

Soooo…looks like I need to start building some 50mm markers with trees on them. I’m looking at you Hanging Tree boxed set. Talk to you next time!
Posted by AgentRock at 10:55 AM