I’m running a bit behind this week, what with the American Society of Virology conference coming up and a manuscript being prepared for publication, but let’s get to the Monday Preview…on Thursday.

So, this is Sandeep Desai, a new master for the Arcanist’s faction. This continues a trend of a master working with a new Tribe in the faction, in this case the Academics. I think we all figured there would be some master eventually who interacted with them (currently they’re the Oxfordian Mages, Iron Zombies, and Freikorps Librarians only, but I’m sure there will be more,) but this is hardly the stuffy professor I expected. Sandeep appears to be an Indian Sikh (hurray for more diversity!) who channels magic that his crew can tap into and use for themselves. Also, his break-down in the Monday Preview itself mentions that he uses Gamin friends, so hurray for the little elemental dudes getting a boost (cut to a sad-faced Iron Gamin suddenly perking up and smiling a metallic smile.) Let’s peek at the stat card real-quick. 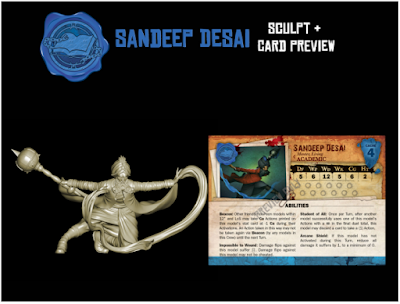 Well, 12 wounds, Arcane Shield, and Impossible to Wound. These Ripples of Fate masters are pretty tough on average, it seems. The rest seems pretty standard, though Df5 is nothing to write home about. The real interesting mechanic with this guy seems to be the Beacon and Student of All abilities. Beacon lets friendly non-peons within 12 of him take one of his Ca actions at -1 Ca during their turn. Once they do this, that ability is locked out for Beacon until the next turn, so no spamming the same spell over and over through multiple little weenies, but it still makes for some interesting force projection possibilities. Then, Student of All allows Sandeep to take a (1) action once per turn when someone uses one of his spells and ends up with a Tome in the final duel total. This leads me to assume that Sandeep won’t have said Tome built in (although if he does, good lord) but still creates some good ability to get bonus AP outside of activation. This leads me to think Sandeep is going to want to be in the mid board where he can project his Beacon out into the action, but isn’t quite tough enough to survive long term in the middle of melee (though being engaged won’t lock other models out of using his spells with a gun symbol, so it’s not the worst thing ever for him to mix it up with that big hittin’ stick he’s carrying around.) Of course, we don’t know what spells he’ll have, not seeing the backside of the card, but still cool.

Overall, his presence in the Arcanist rebel scum reminds me of Nemo from League of Extraordinary Gentlemen, so he’s automatically awesome for that. Here’s hoping he has a cool submarine hidden somewhere. 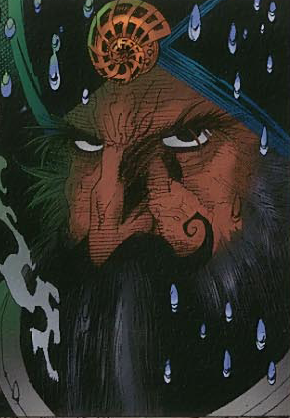 Posted by AgentRock at 1:26 PM