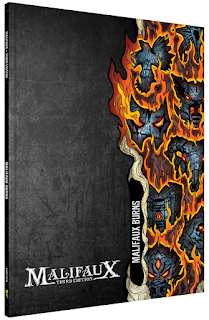 We’ve got 3 more reveals left to go prior to Gencon (which hardly seems possible) so there are ostensibly 6 masters still to see beyond what Wyrd may be showing us through the Waldo’s Weekly articles. This means there will still be some reveals left (assuming they don’t just do a full drop beforehand) but also means we’ve seen a significant chunk and, I think, we can start to draw some extrapolations to what Malifaux may start to look like as a game in the new environment.
This would be simpler, of course, if this was a situation akin to a set rotation in a CCG. That’s not the case here. Your standard edition version of Som’er Teeth Jones you’ve been playing since M3E came out will still be just as legal after September 16th as it was back in the day. But let’s be real. Unless you’re the kind of person who bets on the “Don’t Pass” line, plays aggro red after a block rotation in MtG:A, and fills out your March Madness bracket picking all chalk (IE: people who don’t like fun), you’re going to want to try out some of these new shiny toys on the tabletop. And here’s the thing, you’re not alone. At least for a while, you’re likely to see more of the new versions of masters than the old versions. So, if there are trends in these new Title masters, it’s a relatively safe bet that trend will be defining for the meta once this book drops. It’s worth it to take some time to muse on these, and that’s what we’re going to do here. But let’s keep in mind a couple of things: 1) we don’t really know how these new masters are going to work, just what we’ve seen in the reveals and people’s opinions. We’re living very much in the realm of theory-faux here and 2) I’m an idiot who thought Illuminated were crap at the start of M2E, so no one should take anything I say too seriously.
That about cover it? Cool, let’s get to the analysis.

Thank you for being a friend.

I started by looking at the masters and breaking them up into 3 categories: Damage Dealers, Crew Enhancers, and Enemy Controllers. In some cases this break-down wasn’t perfect (new McCabe, for instance, could be argued to enhance his crew and do pretty good damage) but I tried to make this as clean as I could. People can argue with where I have them slotted in, which is why I’m not going to go master-by-master through this, but I think the trends are clear: the masters are shifting away from killing to enhancing their crews. It’s fairly stark, actually. I have 13 of the original versions of the masters we’ve seen primarily focused on dealing damage, and exactly the same number in the crew enhancement category in their new versions. By enhancement I mean increasing movement, optimizing attacks, giving out free attacks to the crew, etc. That means a couple of things. For one, alpha striking the enemy’s master will do a lot less to completely neuter the enemy crew. They’ll be far more likely to be built with good beaters outside of the master. Second, tying them to their keywords potentially could serve as an even stronger encouragement for players to stay within their keyword to capitalize on this synergy.
The numbers of control masters are roughly the same and they aren’t the majority in the original or new pool, which is probably for the best. Control tends to be a bit of a negative play experience (NPE) and, since games of Malifaux take a lot more time than a quick game like a CCG, that NPE gets stretched out over a longer period of time. Also, the complexity and diversity of crews makes it all but impossible to play true hard control crews effectively But it’ll still be a healthy chunk of the pool, and that’s actually tied pretty closely to the next paragraph.

It’s gonna get crowded on the boards

The Other Coast folks pointed this out in their cast, and I think it’s worth repeating: there’s gonna be a lot of markers getting dropped on boards with these new masters. Whether it’s Geodes, Portals, Pyres, Coffins, or what-have-you, a lot of these masters are gonna be dropping markers on the board that will affect movement. 9 masters we’ve seen so far fit this description, as compared to a scant handful at most previously. This creates a bit of interesting tension with all of the movement tricks these new masters bring along as well, as we’re going to have to be careful not to push our crews into flames/sludge/etc. There’s going to be a lot of hazardous terrain out there, and precise movement will be critical to overcoming it. On a related note, I think models that can remove these markers are going to suddenly be worth a lot more than they were previously, so get those Sandworms painted, folks.

The New Face of Summoning

Obviously, it’s not a surprise that the masters who were formerly associated with summoning are, for the most part, not doing it anymore (that’s sort of the point of the title system, after all, to give you something new and different to play.) But, the masters we’ve seen so far all have a bit of a common theme in the way they have gained the ability to summon new models. All 5 of them (Ophelia, Perdita, Anya, Toni, and Kirai)(I’m not counting McMourning, 3 corpse counters for a Flesh Golem is not summoning as far as I’m concerned) have had the wide open “summon any minion from your keyword” clipped down to summoning relatively low SS models with very few options, often just one. Anya and Toni (and their crews) can summon Drudges. Dita can call her Pistoleros (with special upgrades attached to make that not a complete waste of an AP). Ophelia technically can only trigger her kin to summon back her totems, but those have some offensive potential (as opposed to Reva’s totems, which essentially just exist to be sacrificed.) The point is there’s only going to be a little bit of summoning, and it’s going to be very low soulstone disposable models. The question I have is whether this is just because adding summoning to keywords which were not built with that in mind is really difficult, or if this is going to be the model for summoners going forward? I can see either being true, to be honest, given how much trouble summoning has caused in the game historically. This new world of summoning certainly fits with the most recent Gaining Grounds rules, and it lowers the barrier to entry by not forcing you to buy a whole keyword to play them optimally. We probably won’t really know for sure until the next book comes out, but it makes sense to me.

I know one of the harder parts of the M2E to M3E transition was that many of these masters are sacred cows and they carry an expectation that this master works this way because that’s always the way it’s been. Well, this book gave the designers the opportunity to kill some of those sacred cows and give the masters a new coat of paint. Both Viktorias on one big base? Check. Yan Lo not doing the slow-grow in power? Check. Marcus as an angry werewolf leading the charge? Check check. It’s an awesome refresh for the characters we’ve known and have basically played with in the same general form for nearly a decade, and it actually makes me interested to see what they do with this in the future. I wonder if, for future books, masters that are struggling might get a new title without having to do a full overhaul of every master in the game? Maybe particular titles/versions get rotated out or replaced over time? This opens up a lot of possibilities, and I really hope Wyrd takes the opportunity to run with it and really go wild.
For now, I’m anxious to get this book in my hands. I’ll be curious to see how much of a difference this makes for crews as a whole, rather than just the master. And, of course, I’ll be curious to see how many things I’m wrong about in this article. But mostly I’m just excited to see these new masters in action.
Posted by AgentRock at 11:10 PM