Reveal season is continuing apace faster than I’m following along with them. Wyrd has done a really cool thing by integrating all the content creators in the process this time (and I’m really kicking myself for letting the blog lapse, as it would have been cool to participate). You can see what masters and models have been revealed here, which saves me the burden of having to comment on them all. Win/win. Potentially more importantly we’ve learned what product is coming at Gencon and what may be triggering some of these new faces our masters will be showing us in the future. The reason, quite simply, is that Malifaux is on fire.

Well, maybe not literally, though one master from each of the factions may now have an active desire to change that fact. The Burning Man is coming back, you see, and some members of the Malifaux cast of characters are feeling a bit, hmm, let’s say inspired by his incendiary presence. Nellie Cochrane starts using her propaganda to inspire chaos rather than control. Reva is…well she’s still pretty much a crazy cult leader, but now she’s traded her horse for more burning focus. Kaeris trades her metal wings in for some straight up flames. Parker Barrows appears to be Undead and animated by flames, which is pretty rad. Misaki is fractured, which means…well I’m not sure. She looks older in the picture, I guess. No obvious burning going on there. Maxine’s luck in Malifaux has apparently not changed, as she looks to be pretty mad now and has the keyword Monomaniacal. Euripides looks potentially even more violent. And Ulix is riding a flaming pig steed. It’ll be interesting to see these things in play, but I’m already absolutely in love with this idea thematically. The only way it would be cooler would be if they seceded from their old factions and formed a new one together, but that would be pretty tough to do from a game stand-point. From my perspective, I’m excited about the return of the “Some kind of big event happened in Malifaux, here’s how all our characters are dealing with it” storytelling style of the good old days. You remember don’t you? Back when a meteor fell out of the sky and gave everybody avatar powers? Ah, good times. Good times. It’s one of the most defining characteristics of this game (lore driving mechanics) and a very welcome return. Also, kudos to not going the obvious route and having Sonnia Criid inspired by the Burning Man since, you know, she’s already into fire and stuff. Then again, the BM (ooo, that’s an unfortunate acronym) is at least 50% Cherufe, who already possessed her once. Maybe this is an awkward ex situation? Or maybe Sonnia’s busy on earth and, for once, not in the wrong place at the right time?

With the article, we received another reveal of how all these models are going to be sold to us. After all, there are quite a few masters in Malifaux, and releasing a new package for each of them would be quite a lot of SKU bloat for stores, something that Wyrd specifically was trying to avoid with M3E. The reason for this may not be obvious to folks who don’t have a background in store operations or supply chains, but every piece of inventory you keep on a shelf is an opportunity cost the store incurs for the entire time its there. Modern retail is built on the idea of “just-in-time” supply lines (for better or worse) and, to maximize profit, its best for a game store to avoid taking up shelf space with tons of items for the same game. And, frankly, we can all think of a model that we always find hanging on the shelf for years, costing the store owners money. So, Wyrd has an incentive to cut down the number of boxes they’re going to be putting out. 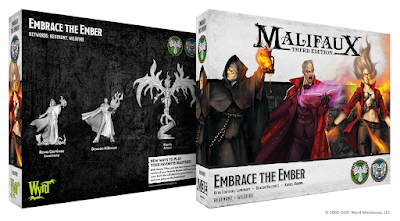 If you’ve been paying attention to the releases (you have, haven’t you?) you’ll notice each of the masters has a new model that shares a keyword with it and a different master. This is not a coincidence. The retail model for these is to sell a boxed set that contains 2 of the new masters as well as the new model they share. Now, this means you’ll have to buy a new master for a faction you potentially don’t play when you buy your new one. In some ways, this is a stroke of genius, because it lets you have a free sampling of this new faction which could maybe lead to players branching out, trying new factions, and eventually buying more models (which is of course the goal.) This does, however, lead to you paying for a model you potentially don’t want, which could leave a sour taste in some players’ mouths. I anticipate the trade forums and ebay lighting up with a lot of individual masters for sale in the weeks after each of these box sets comes out, but I think it’s a clever marketing move all the same. The individual bit sellers are going to make a killing. 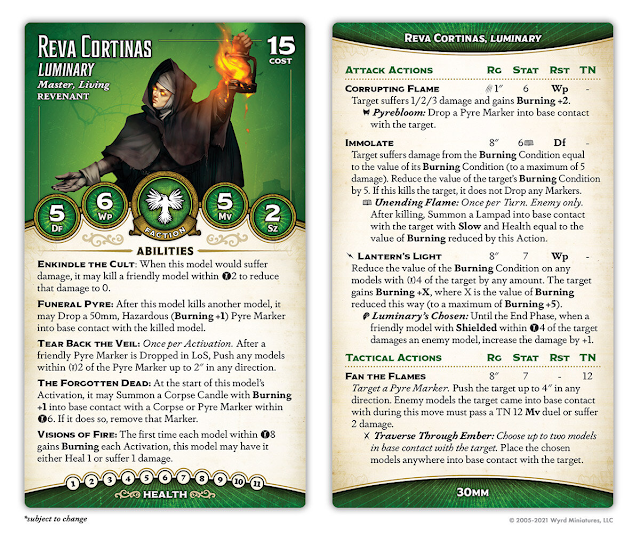 As an example, Reva and Kaeris are going to be sold together in a boxed set called “Embrace the Ember” along with their new friend, Deacon Hillcrest, who we’re told is analogous to one of the Cult’s Doomseekers in ToS. I don’t know much about Kaeris so I won’t weigh in on her, but I’ll chat a bit about Reva. Since she’s got no horse, her move has dropped significantly to 5. In exchange, she’s gained a better ability to manipulate Burning. I know when I have played Reva, I’ve typically had only one of the corpse candles alive at any given point outside the first turn, as I’m usually blowing them up or using them for various purposes. Luminary Reva, on the other hand, can kill a Revenant model within 2” of her to reduce the damage of any attack on her to 0. That’s some serious damage reduction, and a good reason to keep at least one if not both near her at all times. She can heal or damage a model for 1 the first time they gain a point of burning during an activation. She has a free action to concentrate Burning from several models down to one single model, which I imagine will often be followed by her Immolate attack, which makes you reduce the burning from a model to 0 and then take damage for each point of burning taken off. Oh yeah, and if that kills you, her built in trigger lets you summon a Lampad out of them. And she can push a Pyre maker 4” and use a crow trigger to place two friendly models in B2B with it after the push. That would be cooler if it weren’t a trigger, but could provide some interesting mobility tricks to her and/or her crew. Also I guess the pyre markers do damage if they pass through someone during the push, but 2 damage after a failed TN 12 MV duel isn’t exactly what I’d call “reliable.” 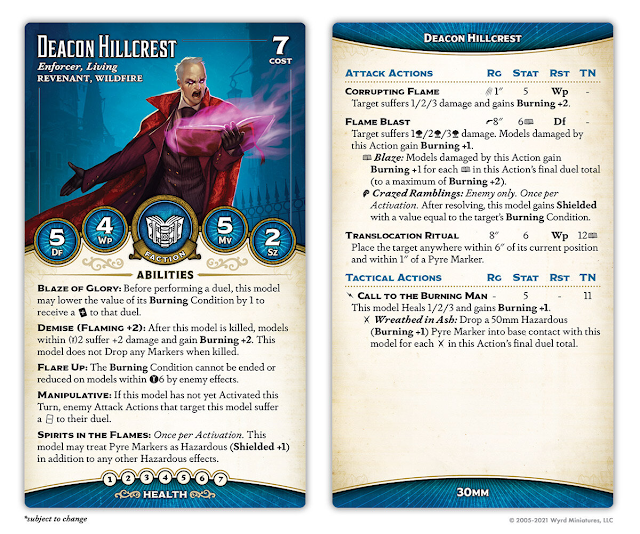 Her new firebrand preacher (tehe) is a 7 stone enforcer who loves him some Burning, both having it and spreading it. Fittingly for a CotBM looney, he has a WP of 4 which makes him pretty vulnerable to attacks from that avenue and a DF of 5 which is nothing to write home about. He can offset this somewhat, however, through Manipulative, the Revenant ability to gain Shield along with Burning, and Blaze of Glory, the Wildfire keyword ability to trade points of Burning for positive flips. Dude’s gonna set up shop in a pyre marker and never leave, is what I’m saying. His melee attack (why are you in melee range of him, he’s standing in a bloody pyre marker?!?) and his ranged attacks do pretty forgettable damage, but give Burning to the target. Translocation ritual is a more utility oriented attack action that lets him teleport people to within 1” of a pyre marker and within 6” of where they start (some of that classic Cult flavor). And he has a self-heal that, you guessed it, gives him Burning. Oh, right, and enemy models can’t reduce their Burning value within 6” of him.

I think Deacon is maybe not that necessary for Kaeris and her crew (who I don’t think really struggle to put out Burning), is going to be a utility player for classic Reva, but will be absolutely required for Luminary Reva. One of the oddities of the Revenant keyword is that it interacts with Burning but doesn’t have many ways to directly put it on the enemy. Deacon fixes that, which is why it’s troubling that he seems a bit fragile at first blush. I always have a hard time parsing out how effective defensive tech will be, so I’ll have to see him on the tabletop to know if he’s going to stick around for the game. You can, of course, dedicate a Shieldbearer to protect him, but that’s now 13 stones you’ve dedicated to spreading Burning around the crew, which may not be the most efficient thing ever. Of course, later on Reva may have some summoned Lampads to take over the job, so it may be alright if he burns out early. New Reva is interesting to me. She’s perhaps a bit more suited to defensive games than her mounted version since she loses so much speed. At first blush I like the classic version a bit more, but I do like the idea of spreading more and more flame around the battlefield. With all the movement tricks these new masters have, restricting that movement with pyre markers may be quite useful. Also, I’m itchy to paint that lamp in her hand with some green flame (points at the banner at the top of the blog.)

And for those keeping count, that’s 19 uses of the words Burn or Burning in the article. Hot girl summer, indeed.

Posted by AgentRock at 5:57 PM