Production Design: The beginnings of my Collodi Crew Painting/Overhaul

-The big news coming up soon is the Homefront worldwide campaign. Tying in the story of Malifaux with The Other Side, players will compete in games of Malifaux to help establish a new Syndicate, a small faction that can be hired by the main factions in TOS. One is the Council, built from the remainders of the cabal of wizards that opened the first Breach. The second is the Sandmen, who are effectively being driven by the Tyrant Nytemare. And, finally, there's the Order of the Chimera, an Egyptian syndicate led by Marcus. Players will report games on Wyrd's Website, with wins supporting one of the new syndicates as well as the Malifaux faction you used. More on this in later posts.

-If you're going to Pax Unplugged, Wyrd needs volunteers.

So, I'll briefly look at what hobby work I have in front of me for the Collodi crew I'm constructing. Per most of my crews, there's going to be a mix of metal and plastic here. I don't like rebuying models I already own, so this is unlikely to change anytime soon. I drug out what models I have that I think would be useful, and took a picture. 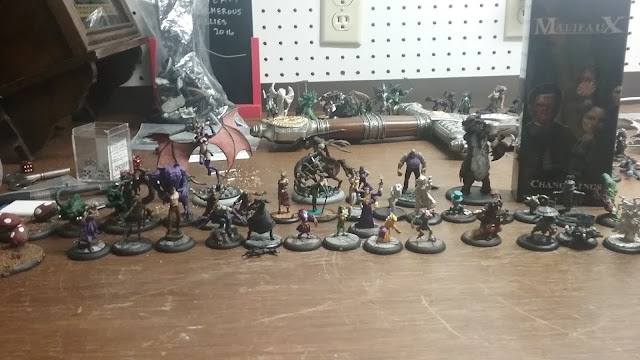 Taking a look at what's there, I have this list of models:

At some point, Lazarus would be a good addition to this bunch, as he and Collodi have fun together. Also, I need to find some proxies for Hinamatsu and Bultungins. Hrmm. I have a lot of work to do. If there's anything obvious that I need to add, let me know.

The paint job on the Collodi crew itself isn't terrible. At one point in time I really fell in love with Games Workshop's washes and tried to use them as the paint themselves to make a crew that looked like watercolor. It kinda worked, but I'm going to just do a normal paint job on them. As tends to be the case with most of my painting, they're too dark. So I need to work on that as well. Maybe I should just strip them and reprime them with white instead of black? I know that would help....

Trying to come up with more to write, but there's not much else to say at the moment. I'll be posting new stuff as I progress, once per month, so that'll at least keep me motivated. Now, if I could manage to not get my ass kicked every time I play him, that might help too...

Next week, I'll be doing a book review of Broken Promises, the new Wyrd book (because I haven't written enough about it, apparently.) After that will be a tactics article featuring the master everybody loves to hate, Pandora. And why am I writing about Pandora? Because I was commissioned by one of my Patreon supporters to do so, that's why!

Speaking of Patreon! This is the last post before the end of the month raffle for a Miss Ery, an alternate model for Teddy. Anyone whose pledged $1 or more a month gains entry to the raffle, and right now you've got an excellent chance of winning. Plus, it's a way to help this blog grow and prosper and can open up new opportunities for Malifaux Musings content. So head over to our Patreon page and sign up!
Posted by AgentRock at 3:36 PM