5 Crews I Want to Play in the Broken Promises Era!

I’m in the middle of the Through the Breach review at the moment. Had hoped to have it done by today, but it will definitely be ready for next week’s post. So, since Broken Promises is available now, I thought I’d take a moment to recap and mention some of the things I’m looking forward to getting onto the tabletop myself. But first, a couple of mini-muses.

-Gencon finished up a couple of weekends ago, and orders from the webstore are being processed/delivered. So far there’s only been one error, which is refreshing given some of the early releases at Gencon previously. The Cyborg upgrades from Hoffman are Rare 3, but the upgrade deck only has 1 of them. To make up for this, you can print the card for free from here.

-Ostensibly the US National Championship for Malifaux, the NOVA Open, is occurring now. It’s the last major tournament pre-Book 5. So enjoy Plague-Pit-and-Flying-Viktorias-free tournament games now, while it lasts. Everybody be sure to say hi to Phiasco if you meet him there! 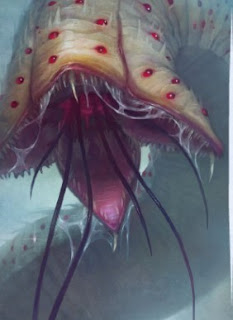 -Finally, Wyrd Chronicles came out this week. It includes a number of cool articles, including a Through the Breach module written by your humble bloggist and featuring the cuddly-creature pictured above.

Since it’s September 1st, this is our first month on Patreon. I’m thankful to the Patrons who’ve signed on already, and I want to remind you to sign up by theend of the month to get in on our raffle. This month’s prize is the alternate Teddy model Miss Ery! You don’t need to give me $10 or even $5 to get in the drawing. Just one dollar gets you into the action! But, if you feel like giving me more, there are rewards like access to future Malifaux writings and a slot in upcoming Malifaux Musings Vassal Leagues! 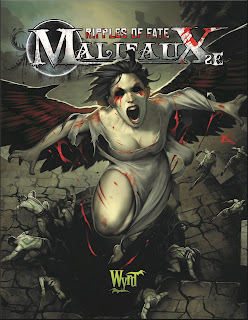 I have to start here, contractually, as I’ve been a big Titania fanboy since Wave 4 playtesting. Also, I’m not allowed to say that she needed help, or she’ll tear my heart out and turn me into one of her Autumn Knights.

Titania: It’s adorable you think so, slave. Perhaps, if you’re lucky, you MIGHT be good enough to become a Gorar. MAYBE.

Anyways, the Autumn Queen got lit in this wave of upgrades. She has two fairly strong playstyles now, a smashy style with Pact with the Grave Spirit and a tanky version with Royal Indignation, and more importantly she has tools to possibly be successful while doing both. I think the tanky one will be the most obvious starting point, as it’s the way we’ve been playing here up until now and she essentially just became tough enough to survive it. The smashy one will be a change of gears for her, and it may be a case of “Why would you take Outcast Misaki when you could take the Viktorias?” where there are other, smashier, more efficient crews in the Neverborn, but it could be fun to have in the back pocket to surprise opponents. She’ll likely be strongest in games where you can force the action into one place (Guard the Stash, Turf War, etc.), especially if you’re bringing her best pal Barbaros for that sweet dual-taunt goodness. Additionally, she has one of the few confluxes for the Mysterious Emissary to make him really a strong part of her crew. Time will tell if this upgrade makes it a must-include for Titania crews, but it definitely makes them stronger by enhancing the rest of her crew. And I’m almost as much of a fanboy for my Poison Ivy Mysterious Emissary as I am for Titania. And, also, I made Hungering Land markers with Piranha Plants on them. And I gotta play that shit. 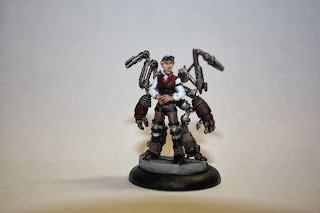 Once upon a time, I built Hoffman for the Tale of Malifaux Bloggers. The paint job I did for those is one of my favorite of any I’ve done so far, including a number of rust and corrosion effects on the metal that I’d never used before. Also, Hoffman is one of the most interesting characters in Malifaux proper, being a person who is honestly trying to be good while working for the Guild but, in truth, is falling steadily deeper into hypocrisy as he goes along. He’s allowed his brother Ryle to be turned into the thing he’s supposed to be policing as head of the Amalgamations division. He has ties to the Arcanists that won’t stay buried. And now he’s been basically promoted over Lucius by the new Governor-General (it should be noted I haven’t read the fluff from Broken Promises yet, so if things have changed don’t spoil it for me.) His new upgrades seem to indicate that he’s leaning into it at this point and converting people into Cyborgs. This opens up some definitely interesting crewbuilding options. I don’t know that you’ll want to use his Arcanist upgrades and Pneumatic Upgrades together in the same crew (that’s a lot of points spent before you’ve even hired any models.) But one or the other will probably be a sort of pseudo-limited upgrade for him. Meanwhile, his new harness and its defense of his crew’s Armor makes his Hoffball nearly indestructible. You want to go through a Peacekeeper when you can’t negate his armor? Good luck. 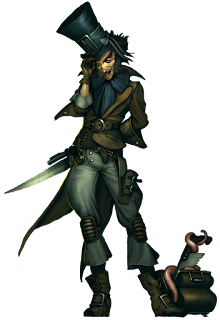 Most masters in Malifaux have some elements of good and evil to them. The Guild are law and order, but they’re also oppressive jerks. The Neverborn are horrifying monsters, but they also happen to be right and are doing all they can to keep these dumb humans from releasing the Tyrants. Even some of the Rezzers have started to have shades of light, particularly Molly and Reva. But then there’s Seamus. Seamus is a villain. Period. He kills people, particularly women, and brings them back to undeath as his slaves. He does it because it’s fun, and because he’s an anarchist, and because the voices in his head told him to do it. He’s what you would get if you crossed the Heath Ledger Joker with a Victorian Hannibal Lecter, and he does it all with a sense of style. He’s Malifaux’s boogeyman, and that is fun to play. His AKA Sebastian Baker upgrade is nice and all, and it opens him up to a handful of new hiring opportunities (though not as many as you’re thinking, and not enough that I think it’ll be required for the strongest of his crews.) But the one I’m really drooling over is his new Do You Know Who I Am? I already preferred the Sinister Reputation version of Seamus before Wave 5, and this makes it even stronger. It lets him take advantage of Terror the way McMourning manipulates Poison, taking a mild hindrance ability and turning it into a major problem for opponents. I want to play a Terrifying: All Seamus-Yin-Sybelle crew, maybe with a Hanged to just really break your opponent’s will to live. And then, of course, you shoot them with your Flintlock. And possibly cackle. 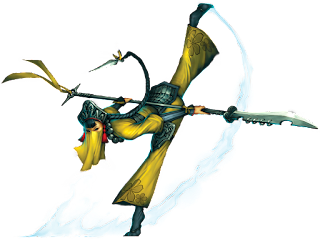 I wrote a post a long time ago (near the beginning of this blog, actually) about theMisaki switch, pointing out that she had two very distinct playstyles to choose from. The Terracotta warrior allowed you to start with one and then shift to the other mid-game, which lets you go from defense to full-out offense as required. With Broken Promises, she gains a third upgrade that allows her to add a third mode, AoE blaster. Wow. I mean, if you’re looking for a master for a fixed-list tournament, I think she would have to be one of the best choices you could make, as you can literally go from defensive to single-target beater to AoE crowdcontroller in the same game. Man, that’s strong. AND THAT’S NOT THE BEST UPGRADE SHE GOT. Risk and Reward lets you have the benefits of soulstones for hand manipulation while keeping her perpetually in range for her 0 soulstone buffs. I don’t go to enough tournaments to say whether this makes her a top-tier master now, but I would have to think she moves up exponentially. Once I get my Throwback Misaki painted (not that I don’t have the normal one, but I have to do something to keep from just switching to Misaki straight off) you can bet I’ll be rejoining Phiasco in service to the Katanaka clan. 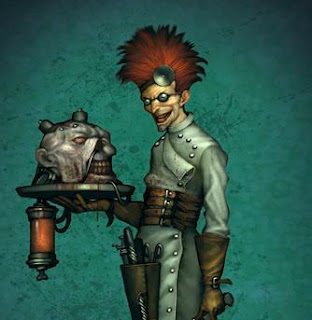 If you don’t know me in my real-life, I work in Science. Specifically I’m a Virologist, which you would think would point me towards playing Hamelin. On the other hand, I’m not a terrible person, so I can’t play that crew *waits for hate mail.* So if I’m going to play myself in Malifaux, Doctor Doug is probably the closest thing (plus I have a dog that most assuredly inflicts Poison on the people around him.) And, in a way, McMourning is a great choice for my chronic Magpie syndrome, because now he can build a crew containing models from every faction. You got beasts? You got academics? Come on down into the lab, and let’s see what we can do for you. (Author’s Note: Yes, you could build a rainbow crew before with mercenaries. And Marcus could probably do it before now also. I don’t care.) Beyond that, McMourning probably has some of the best fluff in the game. He’s the comedy version of Seamus’ full out horror. He and Sebastian are a classical comedy duo that you actually want to have on the board together. They gain access to the Scorpius, who becomes legitimately decent in this crew now. There’s poison all over the place in Malifaux. If you’re playing Guild McMourning and hire Kudra and give her Debt to the Guild, she can become an actually fairly scary melee beater on top of throwing out tons of Poison. There’s a lot of good stuff here, is what I’m saying. And, you know, McMourning was already pretty good. So time to borrow some scrubs and scalpels from work for cosplay, I’m thinking.

Well, that’s the crews I’m looking forward to trying (on top of building Collodi. I haven't forgotten. Don't worry.) Who are you wanting to try out? Let me know in the comments!

Posted by AgentRock at 3:52 PM