It’s been kind of quiet around here, recently, because I’ve been working on a soon to be announced project and dealing with some real life stuff. So, let’s briefly run through some mini-muses and then get Part 1 of Phiasco's Adepticon report.

-Wyrd has announced some changes to the Easter and November sales. In an effort to support brick and mortar game stores, they’re going to reduce their pre-release offerings. This should have the effect of cutting down on the number of players who order directly and help store owners. They’re going to continue doing special edition models and their colored-plastic stuff, but you’ll just have to wait for your Yasunori and Rougarou releases, this year. This is a sacrifice that is important for the industry as a whole, so I hope people don't gripe.

-Wyrd has a couple of new board games in the works. One, Bayou Bash, involves Gremlins having a race on out-of-control animals, using dirty tactics to help themselves, and trying to cross the finish line first. The winner of the game, however, is the one who puts on the best show! The other is an expansion for Darkness Comes Rattling which introduces two new characters and allows the players to enter the spirit realm.

-Iron Painter is coming back soon, so…get your brushes ready? I don’t know, Your paint pots? I’m not a competitive painter. Be ready, I guess. Iron painter's appeal for me is just to look at all the pretty painted pictures. And, you know, despair of my own "ok" painting skills by comparison.

-The March FAQ for Malifaux has been released. Mostly it appears to be clarifications and/or corrections to make it jive with the January Erratas, and to deal with a  handful of other odd situations that have been asked in recent weeks.

-A Stitch in Time has had Parts 2 and 3 release since last we posted. The Fated characters have found themselves hurled backwards through time to the days of Malifaux’s first breach, in the 1700s. To survive this trip (and hopefully not mess up time too much) they’ll need to face down a Quebecois Necromancer, brave the dangers of the haunted church that gives the Redchapel District its name, and survive an encounter with one of Malifaux’s oldest and most powerful threats!

Greetings.  It's Phiasco of the Wandering River Dojo.  I've been to several tournaments recently and I have been remiss in my reporting duties.  So I figured I would return to reporting with one of the largest draws for a Malifaux tournament attendance wise.  Adepticon!

So first thing people who might be interested in going to an event like this is what will it cost me?  The year before the swag bag was tied into the cost of the badge and when the swag bags ran out you were SOL.  This year they cut the swag bag into an additional expense bringing down the cost of the badge and guaranteeing a bag to those that buy one .  So the weekend badge just to attend was $30 for the weekend and there was a Malifaux track that was $40.  The track includes the achievement league, meet and greet, the cake match, masters, and the story encounter.  I failed to notice it did not include henchman hardcore and the enforcer brawl (maybe they were on there and I removed them because of the flux in logistics).  Think there is a way to do just the masters for less than $50 if you don't include travel and lodging.

The swag bag was a $25 add on and this year it was probably easily worth twice to three times that.  If I were thinking I would have snapped a picture of all the stuff before I pieced it out.  It included a small mystery box, a full Hordes rulebook ($60 value), and a fantasy flight box set for I want to say Rune Wars but I'm waiting for it to arrive since I sent it with a friend because I flew in.  The bag also had several other trinkets so I will definitely be getting the swag bag add on for future events.  In addition to the swag bag there was a mobile beer cart that you buy a beer or beers and get free Malifaux (and other companies) stuff.  Granted that was cash only and I run to the 4 corners of the convention on Sunday for an ATM which were all out of cash only to borrow the money so I could get my teammate a Whiskey Golem but the look on his face was worth it.

So without further ado... the events!

The first couple I will be making general assumptions because I had a ticket but did not participate.

Meet and Greet-
I going to make the assumption this is a loose organization of players looking to just play games whether for fun or to facilitate the achievement league.  I came through early Thursday but I didn't bring my stuff because I was just getting my bearings, badge, swag and so forth.  Next year I will make an attempt to be free to play games Thursday morning.  I'm always up for a game of Malifaux.

Cake Match-
From what I understand you make themed food and enter it in a baking contest.  If I somehow develop some hidden culinary skill I did not know I had I will make an attempt at this in the future.  But there is also the logistics of transporting said food if I fly again.  Looks like a fun event but not certain I will have the capacity to participate. 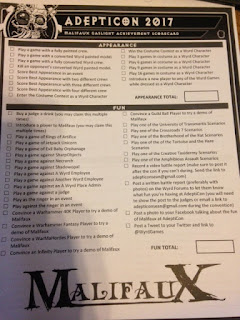 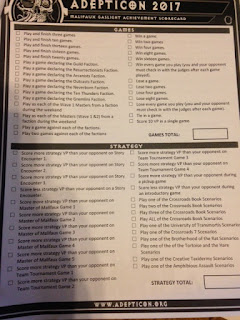 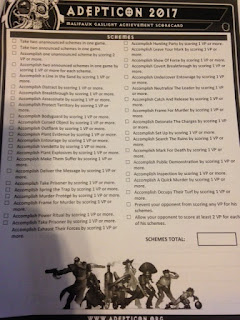 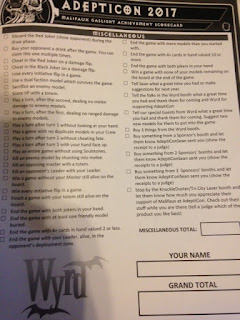 So coming in I thought I was going to participate by accident.  I'm not going to get into where this plan went sideways in this post and I'm still on the fence if I want to bring it up and how to do it in a constructive manner. But needless to say second place was 90 something points and first was 140+.  Things I didn't know.  Adepticon uses an app called guidebook that lists your events and the Strategies and Schemes are listed in advance so if I knew this going in it could have helped me narrow my crew selection ahead of time for Masters and give me a heads up for what I need to play outside of organized play to score more achievement points.  So I have a plan for next year going in.

Henchman Hardcore-
This is a variant format found on Wyrd's website if you are interested.  I fully intended on playing but there was a misunderstanding on my part that the Malifaux included all of the events that were not the Team tournament.  It could be at the time I didn't expect to be doing Thursday events because I thought I was carpooling.  Needless to say I didn't have event tickets and showed up while the last round was in progress.  I fear I won't get to test my new list until Gencon.

Enforcer Brawl-
If there was ever a case and point to be made how streaky a deck of cards can be my Lone Swordsman proved it in this 3 round event.  This is also an official alternate format found on Wyrd's website.  So I took the swordsman with recalled training.  The last enforcer brawl I played they let us swap models between rounds.  I don't know that I would have but I don't mind either way.  Round 1 I shoot out to 17 points because the cards fell exactly where I needed them to.  Last in initiative last turn.  Hit the board, pop the upgrade, hit reactivate and kill 2 models for 8 points.  The next 2 rounds I score 4 and 0 respectively.  I came in 5th and first was only 5 or 6 points away.  I was there to have fun and fun was had.

Team Tournament-
I don't think this is a supported format but it is definitely a popular one.  It's basically 4 35SS master led crews.  Adam and I stole second place at a team event in December.  While on the way back from TFL Curtis and I were spit balling ideas and came up with Glowy Somer.  Sadly Curtis had some unexpected surgery not too long ago and I was out a partner for teams.  As luck would have it I was talking to Chris Bellamy and he knew someone looking for a teammate and they also played gremlins.  And the Legion of Boom was born.  So going in I knew most of my thunder shenanigans wouldn't translate to gremlins.  Furthermore Sh5 on Somer could be a liability to the plan.  So I devised a plan to spam bayous and park them just outside of engagement and double blast into the bad guys for 4 damage that ignores armor, incorporeal, and hard to kill.  (I thought it was 5 with the glowy but the +1 damage doesn't carry to blasts).  So instead of going game by game I will highlight things that worked vs. things that didn't.  Aionus + piglets and bayous and skeeters... gold.  Ditch a 4 for fast and reckless on the bayous?  Yes please.  If I could have coordinated the swarm and gotten mileage out of Show Off and 4 ap suicide bayous, I would have.  My never playing gremlins was a liability, though.  I think I have only ever played my teammate once so I had no idea how he wanted to play and vice versa.  I had all these ideas and tried to implement more than one at a time and ultimately between that and clever play by some of our opponents we eked out 1 tie and 3 losses.  That happened to be good enough to take best in faction for gremlins.  We also came in last.


Not a spoon but I can learn origami...

I am tempted to run one of these at Gigabites in the not so distant future.  Just need to run the logistics and pull the trigger.

I'm going to splinter off Masters, Story and my mid table mediocrity off into another post.  I ought to have it up in the near future.  Until then...

In the meantime, don't forget to visit our our sponsor's website Leodis Games. Pre-orders of Malifaux items are 20% off. They are one of the best distributors in the UK, and they'll do right by you, and kick a little bit of support our way in exchange. So go check 'em out!
Posted by Unknown at 10:58 PM