Continuing with the Ripples of Fate previews, this week’s sneak peek reveals a master from the Resurrectionist faction. Reva appears to be a woman wearing what resembles a nun’s habit, riding a horse. I know I, for one, enjoy the mounted characters, so that’s always fun. I wish I had more details to share on the character’s background, as I did with Titania last week, but alas Reva hasn’t appeared anywhere to give us some information on who or what she is (at least, not that we know.)
So, let’s take a look at the stat card, shall we? 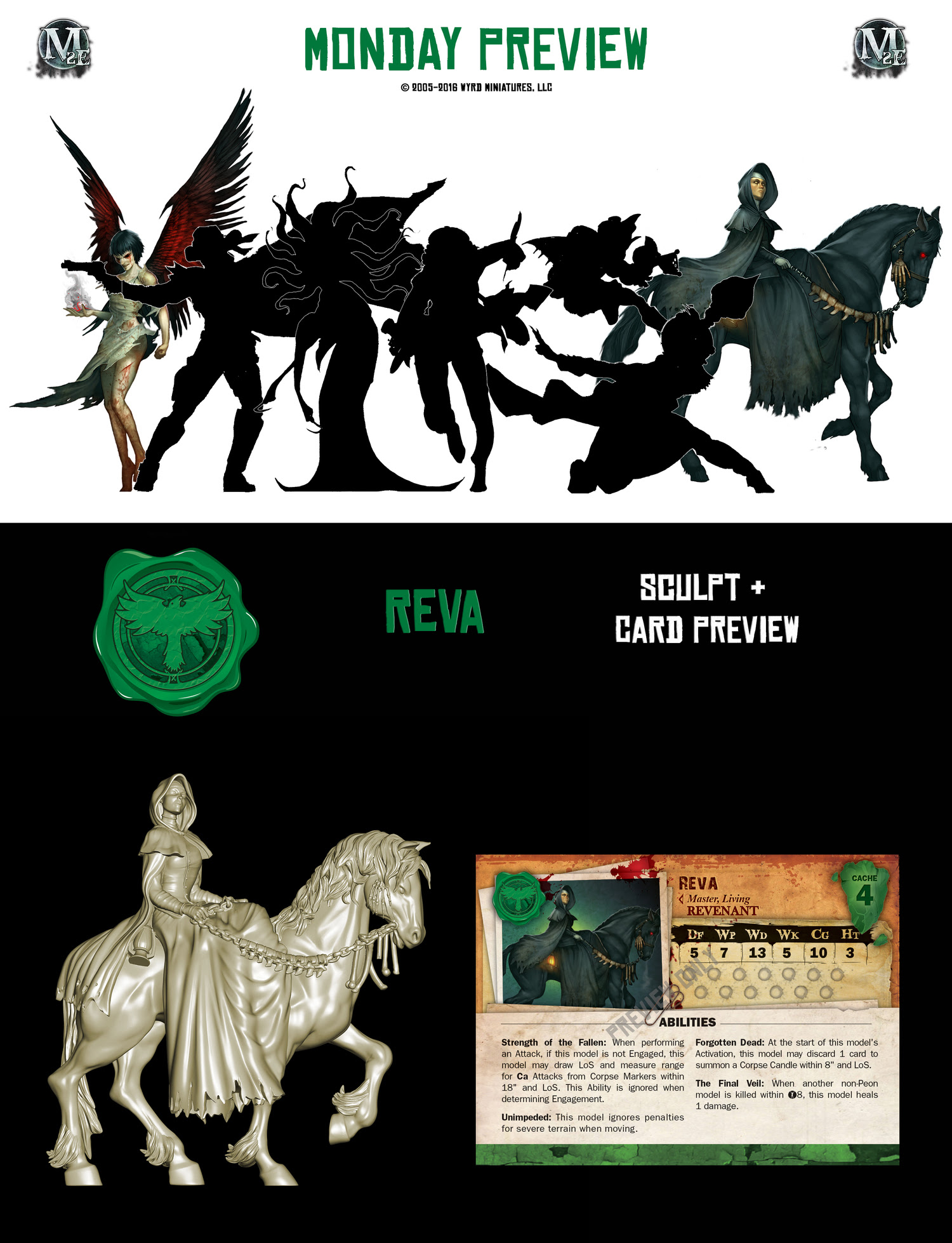 We have the first appearance of the Revenant keyword, so apparently Reva will come along with her own new type of creatures. With 13 wounds she has some survivability, but perhaps not as much as we’re used to seeing from Rezzer masters since she is only Df 5 and has none of the usual defensive keywords (armor, Hard to Wound, Hard to Kill, etc.) This appears to be less of an issue for Reva, however, as she is able to cast her spells out of any corpse markers she can see within 18”. As such, it seems she’s going to want to stay back a bit rather than leading from the front lines. Her horse seems to embrace the “Slow and steady wins the race” mantra, as it only has walk 5, though with Unimpeded and a charge of 10, I wouldn’t exactly call her slow either.

Reva definitely seems to draw power from the dead a bit more directly than the other Rezzer masters, both from her ability to use corpses to draw line of sight and her The Final Veil ability, which lets her heal whenever a non-peon is killed within 8” of her. She can summon a corpse candle (whatever that is. Probably some sort of dead totemy thing like a daydream or a marionette) by discarding a card at the start of her activation.

Looks like a cool model, and potentially a new flavor for the Rezzers (wait, we don’t want to get the corpse markers back up again?). I’m quietly hoping she doesn’t have an awesome (0) action, as Maniacal Laugh to turn corpse markers into Mindless Zombies creates some interesting possibilities to give her Rasputina-like force projection abilities. Of course, we don’t know what the spells she would be casting out of these corpse markers will be, but I doubt they involve cuddling the enemy and giving them a nice box of candies. In any case, as a sort of sideline fan of the Resurrectionists (I’ll get around to playing them some day) I’m interested to see more of who Reva and her Revenants are and what they do on the battlefield.
Posted by AgentRock at 1:45 PM