I want to take the time to recognize all the hard work and sacrifice to run events.  Thank you to all of the judges and organizers for cramming this much Malifaux awesomeness into a 4 day window.  Thank you to the sponsors and Wyrd games for their tournament support.

Masters of Malifaux 2017 at Adepticon quick and dirty recap.

I did most of the lists with pictures.  I will probably continue this method and try to improve it in the future.  If there are any questions on any games I will try to answer to the best of my ability.  I intended to save the names off the best coast pairings app but I don't know how to go back to a previous month for data or if that is even an option.  I will remember to screen grab those next time. 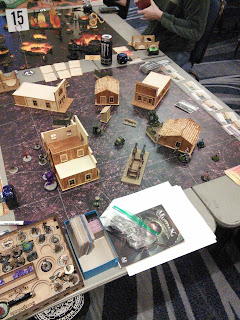 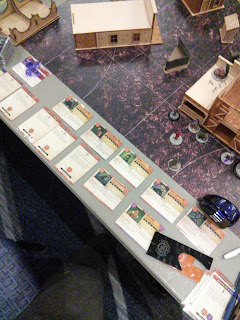 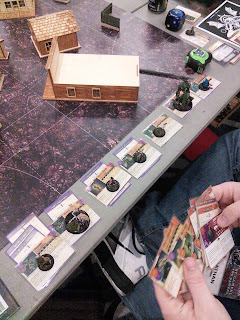 So my plan was to have Huggy tell Nekima to give me points for Frame and then Lynch would get me Quick Murder.  I put the Effigy in for padding since Leader was a potential target.  I figured if I could weather the potential assault I could counter punch my way to a win.  I made Yin my 'quick' target so I could limit his scheme selection.  I think he opted for Hunting Party if memory serves.
I put the Effigy on 1 wound probably telegraphing my Frame target.  Nekima came in as predicted turn 2 and parked where it would bleed on Lynch, the Effigy and the Terracotta.  So I sent huggy in to delete her knowing I was probably trading points but I was getting at least 7 (Quick, Frame by bleeding, and a head marker) to his potential 3 so I was good with the trade.  The voodoo doll had a hard time landing hex on Yin.  Spent 3 turns trying and it finally landed.  Then Iggy did his thing but by then I had 3 heads and cruised to a 9-6 victory. 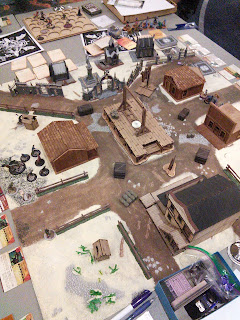 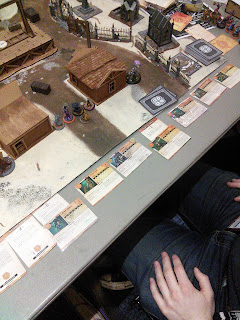 So McCabe vs Asami.  I think this was my favorite game of the whole convention.  I found a way to play vs a summoner, deny, and score interference all in the same turn with a non summoner.  Granted this will become way easier when Sun Quiang finally gets a model.  The plan fell apart when I tried to flip an upgrade into a second Badge of Speed after I moved the first one off McCabe.  We called the judge and he ruled against me.  I think the decision was fair and I played on but I now had a model out of position and I wasn't able to recover.  It was a hard fought match but inevitably I lost 5-7. 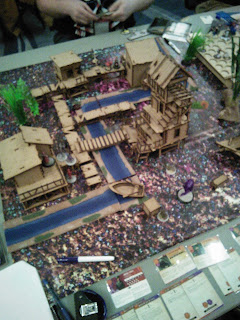 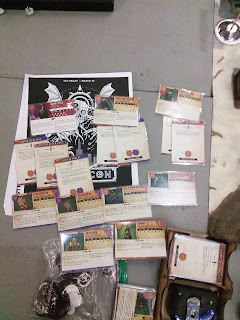 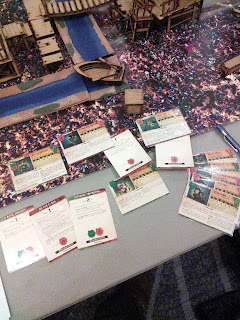 Things that worked.  Sadir shooting the bad guys and milling the deck to get all 4 aces.  Beckoner showing McMourning the goods and made him come running.  Pay for Blood 2 damage.  Final debt 10 damage.  52 Pick Up 8 damage.  No more McMourning  turn 1.
Things that didn't work.  Selecting the wrong Frame target on my side(but still scored 3). Sadir shooting all the bad guys and giving away Frame turn 3.  Underestimating Phiona on a squat marker Steve was holding.  My deck going cold so the nurse could more or less neutralize Lynch.  Phiasco gaining evidence +2.  Somehow managing to lose this game 6-9.
This game will change the way I approach the game in the future. 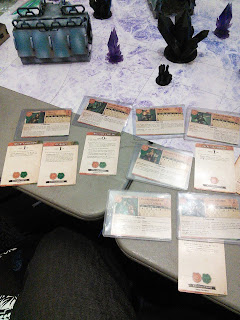 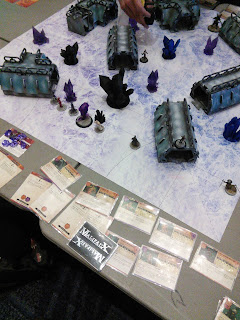 This was a bad match up for my opponent.  I more or less ignore all of Yan Lo's defensive tech with Lynch so all I had to do was survive the punch and my counterpunch should take him out.  I was able to peel a model every round with the beckoner and have Huggy eat it when it was on my half of the table.  Then run Sensei Yu for entourage at the end.  I won 6-3 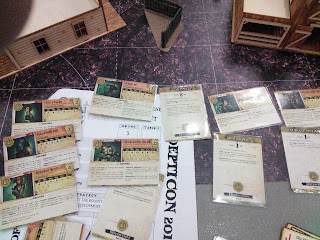 I'm pretty sure my list was the same from game 4 and I was back on the table I played at round 1.

So Hamlin is a pain in the rear if you don't have an answer for the rats.  Need to include long range blasts and/or Misaki.  It was near impossible for me to maneuver to score Bounty.  I did ok on my schemes but it wasn't enough.  5-7 loss.

Story encounters on Sunday.  I was worried if I played all 3 games that I would possibly miss my flight and be screwed because I needed to be at work Monday morning.  These games are generally a little chaotic but they almost always have optional rules for scoring so each story is more or less different in that regard.  I went 1-1-1.  I didn't take many notes (mental or otherwise) due to sleep deprivation but I will endeavor to do better in the future.

Adam and I will be hosting a 50ss tournament in Blacksburg Va. Saturday April 22nd.  $5 admission.  9am check in, round 1 starting at 10.
I will be running a team tournament at Giga Bites in Marietta GA July 1.  It will use the same format as the team event at Adepticon with only slight changes if any.  It will likely be 3 rounds.  Details will be posted to Georgia Malifaux and Southeastern Malifaux facebook groups when I have them.
plug our event(s)

In the meantime, don't forget to visit our our sponsor's website Leodis Games. Pre-orders of Malifaux items are 20% off. They are one of the best distributors in the UK, and they'll do right by you, and kick a little bit of support our way in exchange. So go check 'em out!
Posted by Unknown at 9:20 AM