Why we kill your characters (and some news for Gencon.)

-We’re a couple of weeks out from Gencon, so it was time for the annual announcement of the Nightmare and Limited Editions available at the big show. As a result of their victory in the Worldwide Malifaux Event related to The Other Side, this year’s NE box goes to the Gremlins. It features an odd alternate version of the Ulix boxed set with Unicorns and Winged Horses in place of the pigs. I, uh, well I don’t necessarily want them. You might like them. I’m sure it’s nice for you. I don’t play Gremlins, and I don’t love crews that break the verisimilitude of Malifaux. Feel free to let me know I’m dumb and wrong for not liking it. I will accept this.

-This year’s Miss model is not the male to female transition we’re used to. In this #metoo era, our Wyrd overlords have elected to go the other way and make a male Shikome. His name is He-kome, because of course it is. I dig this model. I don’t play rezzers so I don’t need it, but I dig it. Plus, all you Nico players are flocking over to Kirai after the nerf, so don’t say Wyrd never gave you nothin’. 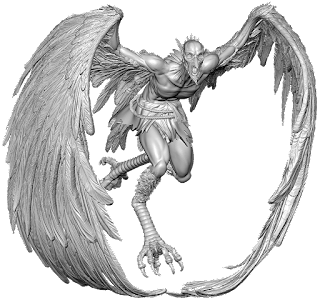 -Probably the biggest info-bomb, however, was the revelation that this year’s Gencon will be the first since the game’s release where there is no new book (at least as far as I can remember.) So, no book 6. There are some kinda cool limited edition/alternate sculpt versions of models, and the usual slew of stuff from further down the release schedule will be available for your purchasing pleasure. I think the alternate Mr. Graves is kinda cool, though mostly as a Mature Nephilim rather than as the G man himself (bald is beautiful, ya’ll.) There’s some other good stuff in there. I definitely recommend the Through the Breach adventure Northern Sedition that they’re releasing there. It’s a continuation of the Northern Aggression adventure (though you can start with this chapter as well) that takes things to a whole new level and integrates some of Malifaux’s power players into the action. Also, the Guild sourcebook Above the Law is coming out. There's good stuff in there too. I like the sculpt of the alt Ototo better than the old one, but I don't play Ototo so it would just be a cosmetic thing if I got it.

What this news about no Malifaux release means is, of course, a subject of much speculation. One assumes that the forthcoming The Other Side game and the departure of Aaron Darland from the design team likely has something to do with the delay in book 6. I’m not going to speculate, but it is certainly a bummer not to have anything new that I’m personally jumping up and down about. Probably better for my budget in the long run, I guess. On the other hand, the most traffic Malifaux Musings ever has comes from discussing Gencon previews, so that kinda sucks on a personal level.

***
Those that follow RPG streaming online can’t help but have notice that, last week, something pretty significant happened. The whole RPG twitterverse was suddenly talking about character death all of a sudden. The Dungeons and Dragons stream Critical Role is a big part of why RPGs are currently undergoing a renaissance/golden age/other superlatives. The whole industry of streaming games comes from them. And, a couple game sessions ago, their Dungeon Master Matt Mercer killed one of the characters. The group was playing at half strength and made choices that put them in contact with a very dangerous group of enemies who were (in this GM’s view) probably designed to be fought by the full strength party rather than the partial group.

One of the players used an ability that dropped them to 0 hps and knocked them unconscious. The adversary he was fighting made a choice to, rather than just wiping the characters out, make a Negan-esque example out of that character and killed him. It could have been avoided, though not without some obvious contortion from the DM to save him. Nevertheless, Mercer was not “Mercerful” as the audience often refers to him, and the character is dead now (disclaimer: I haven’t watched this week’s episode yet, but they’re too low level and have no cleric, so chances are they can’t fix it.)

It sucked. The character was cool and well-liked by the audience. He had an interesting and mysterious backstory that, most likely, will not be explored now. A certain amount of sadness is expected at this point. Lord knows I was a little bit shocked by it. However, as Mercer would suggest on Twitter in an address later in the week, some people got way more upset and were angry at him for not pulling his punch and saving the charcter.

To those people: you are wrong. You’re allowed to feel the way you feel, but you are wrong. Also, if you made Matt Mercer sad I’m not friends with you anymore. Just know that. I will fight you.

The subject of character death is always a touchy one where RPGs are concerned. After all, your players build these characters. They invest their time and energy and emotions into making them unique and interesting. If they’re like me, they spend FAR too much time thinking about them when they’re supposed to be thinking about work or driving their car. And then, because some die rolls go awry, that character is gone. No more stories. No more adventures. Their tale is done, and sometimes they die in ignominious ways that don’t even help the story progress. We joke in my RPG games that my players are unbeatably dominant in important plot related combats, but random meaningless encounters are perpetually life-threatening.

Some suggest that this is an argument for finding ways around killing the character. Lord knows, in some games it’s nearly impossible to make someone permanently die as it is. Through the Breach doesn’t have this particular problem (no resurrection Magia, as far as I’m aware), but the inclusion of undead or augmented characters means that anyone with sufficient money or access to necromancy can’t really be killed forever outside of some very extreme circumstances. However, veterans of the game know that death can come on very fast in TTB, and is often quite gruesome. One thing the game does better than some other RPGs, in my opinion, is force characters to suffer mounting difficulties and disadvantages as damage accumulates, so that you tend to fall down very fast when things go awry. A few defense flips and/or a well-placed Red Joker can result in a character death coming out of the blue.

And I’m here to convince you: that’s a good thing.

Here’s why. Winning feels good in an RPG. Your game master creates a challenge, and you overcome it. Evil is smited. Loot is acquired. Fair maidens are saved. It feels good. But the thing is, if there’s no risk involved, it doesn’t feel as good as it would have otherwise. If the threat of death isn’t there, the damage your character is taking becomes abstract numerical transactions rather than the ever-approaching tread of doom. And as soon as your characters start to feel like they’re immune to those dangers and free of those consequences, their achievements don’t matter as much anymore.

The temptation for game masters is to try and protect their players for the sake of the story. Don’t do it. The story is what happens when your players interact with the situations you create, not a set plot you devise from the beginning that your players are only allowed to walk through and observe. If the choices they make in game or the vagaries of the fate deck result in a player dying, you’ve just been given some of the strongest plot fodder you could ask for. These are the things players talk about. These are the stories they pass on. Don’t go out of your way to kill them, but don’t go out of your way to save them, either. I often say that the best GM I’ve ever played for is a completely merciless tyrant (literally, he’s had conversations with me about how he prefers monarchies to democracy) who once had a villain throw one of my characters’ young children off of a cliff to screw with me. And I’ll never miss an opportunity to play in one of his games, because I know that any achievements my characters make there will be earned.

For the Critical Role crew, they played a game into the epic tier in the first campaign of their show, and were still playing their new low-level characters like the bullet proof near-immortals they used to have. That will stop now, I would imagine. And, as a result of this character death, a game that has thus far had no clear antagonist has a legit villain for the party to overcome. Even as an audience member, I’m anxious to dig into the next episode ASAP so I can see how the group carries on. These are the benefits of character death. So, Fatemasters, go out and kill your characters. Even if they never say it out loud, they’ll thank you for it in the long run.

Posted by AgentRock at 2:23 PM