Yesterday’s announcement of Malifaux 3rd Edition set the world of the miniature game on fire, to no one’s great surprise. Many people are excited, as I have been since I learned the news that change was on the way. Many have been griping for quite a while about a number of aspects of M2E that have not aged particularly well over the last 5 years (Vantage Point, Model Bloat, etc.) An edition change is always big news, but Edition Wars!TM are also a perpetual concern for game designers. No doubt they would like to create new rules to address problems in previous iterations (and, let’s be honest, having you buy new books/cards/models doesn’t hurt as an incentive either) every time they creep up but, inevitably, an edition change leaves a bad taste in some people’s mouths.

It’s a fact of life. The same thing happened with the transition from M1.5E to M2E. And, of course, no one at Wyrd is surprised that this announcement of M3E has left to the inevitable vocal minority declaring that this is the last straw, and they’re going to go play something else. There’s a reason that the URL for Malifaux 3rd Edition’s announcement is https://www.wyrd-games.net/table-flip (and I give them props for lampshading it from the beginning.) But before we all start looting and rioting, why don’t we take a look at what’s coming in M3E and go from there?

First of all, M3E is not a “throw out the rules engine and start over” rewrite. M2E’s a pretty good baby with a few glitches, and the designers don’t want to throw it out with the bath water. M3E is more of a streamlining effort. Towards this end, the number of conditions in the game are being trimmed down to a core set of 11 (pictured below) rather than the numerous, never ending variety of conditions that came about over the course of the game’s lifetime. 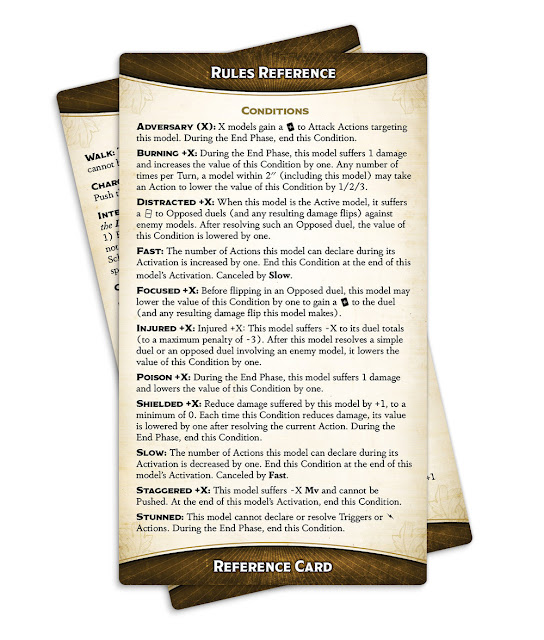 There are a lot of familiar things in there, as well as some new ones. For one thing, Burning is more like inverted Poison now, as it only ever does one point of damage, but your value of Burning goes up every turn instead of down. Shielded is obviously meant to reflect the Arcane Shield that started to become ubiquitous on Arcanists later in M2E’s life, with it reducing the damage a model takes by 1 and then reducing the Shielded condition every time you take a hit. Distracted, Injured, Staggered, and Stunned are new conditions that inflict various forms of debuffs on enemy models. It’s a lot to track for now, but I’m sure the more we play the more we’ll learn them. I think it’s a good move. To offset the loss of unique Conditions that some masters impose (Blighted, for instance) we’ll have tokens masters put on models that the crew can use as a resource. I think this is an elegant solution to one of the things that have bogged own Malifaux over time, and I’m excited to see it in action.

Beyond the explicitly detailed rules changes, there are a number of less clear indications of rules streamlining. The cards and the art are being updated to look more like those we’ve seen from The Other Side. There will be new sculpts of the models coming, but the ones you have will still be legal and the full rule set and stat cards will be released for free at M3E’s release date, meaning all you’ll have to do is download and learn the new stuff and you’ll be good to go! Otherwise, there are simply vague references to “ironing out wrinkles in the M2E engine” and “adjusting deployment zones and threat ranges to get you into combat faster”. *shrug* We don’t know anything about these, so we’ll just see what we learn as time goes on.

Another big change are the hiring rules. We’re told that M3E will focus on hiring more thematic crews, both through more Keyword synergy and by imposing a penalty on hiring models form outside the leader’s theme. I don’t know that too many people will be upset about that, as I know many people have wanted to see more thematic crews in Malifaux. Another big change, of course, is the revelation that M3E will allow for the hiring of multiple masters into your crew. This is one that seems to be bringing in a bit more trepidation from people, but I’m personally excited for the idea. I know some of the coolest pieces of Malifaux fluff stories are when a pair or trio of masters team up to take down a greater threat. One assumes Masters will be quite expensive to balance this. We’ll see what it looks like down the line, but put me in the “fan” column.

While we’re talking about Masters, there are some new ones coming! Nekima is going to get the M1.5 to M2E henchman promotion and take over as leader of the Nephilim. The Guild get a pair of newbies, in the form of a frontier lawman named Cornelius Basse and Captain Dashel (who has to have flown the highest in Malifaux from his humble beginnings as a totem to a full Master!) One that’s been in Malifaux’s fluff for a long time that is finally coming into the game is Albus Von Schtook, a necromancer who lives in the sewers in his "University of Transmortis" and broadcasts necromantic lessons to burgeoning Resurrectionists throughout the city. The Neverborn gain something apparently related to the Cyclopses we saw as Fae from Titania’s crew named Euripides and Marcus is becoming dual faction with the Neverborn. Hoffman will make his “one foot in the Arcanists” official and become dual faction, and Jack Daw will become dual Outcasts and Rezzers. Zipp is becoming dual faction in the Outcasts as well as remaining in the newly christened “Bayou” faction (aka Gremlins 2.0) Finally, the Qi and Gong’s proprietor, Youko Hamasaki, is joining the game as well, making the Ten Thunders now the faction with the most hookers by capita of any faction in Malifaux.

Now, the flip side of this comes with the loss of some options. For one thing, some of the Masters who have been eliminated in the fluff are also being eliminated from tournament legality, namely Nicodem, Lillith, and Ramos who are, for various reasons, either dead or incapacitated and are now no longer going to be tournament legal. For whatever reason Collodi is also in that list (he’s not dead or in jail as far as I know. The only reason I can think of why he’d no longer be around is if the weird paradox from the Through the Breach: Stitch in Time story where Collodi never ended up becoming evil. He instead evacuated from Malifaux to Earth at the end of the era of the First Breach and became a popular performer there. That would be weird if it worked out that way.) All of these will eventually be available in a special “Dead Man’s Hand” pack at some point in the future which your tournament organizer will be able to allow at their option, so they’re not gone forever but won’t be tourney legal officially. Additionally, McMourning, McCabe, Jacob Lynch, Misaki, Brewmaster, and Tara lost their dual faction status, so that could also shift which factions you play a lot, potentially.

Now, I get it that this sucks. I really, really do get it. Believe me. I’ve spent the last couple of years playing primarily Lillith, Neverborn Lynch, Guild McCabe, and Collodi, and I occasionally splashed in some Guild McMourning for flavor. Hell, when I was scrambling for extra money while my wife was going through nursing school and our finances got tight, I started selling off models from factions I don’t play, liquidating all of my Rezzers (so now I can’t even play my McMourning in faction as I don’t have the models to do it anymore) and a Marcus crew that was one of the paint jobs I was proudest of, who I could now use with my Neverborn if I still owned it. So, yeah. I have reason to bitch. But I’m not going to. I’m embracing the change. I’m probably going to give the Neverborn a rest for a while since my most played masters either aren’t in the game or aren’t in the faction anymore. I encourage you to do the same, and put your salt away for now.

If you’re still worried about M3E, you can help to make it better! There’s a sign-up online for the M3E closed beta and, much like with voting, if you don’t like the result but don’t do your part to make things better, you don’t get to complain. Go sign up for the beta! The more people join, the more data the designers will receive and the better the game will ultimately be.

Going forward, Malifaux Musings will take a walk through the various factions and take a look at what we know regarding their changes, paired up with our usual slew of articles (there’s not really enough info for full blog posts at this point.) In the meantime, I encourage you to check out each faction's page to get a blurb about what's happening in the future. If nothing else, it's worth it to see the awesome new faction banner art on them (and kudos to whichever artist did those. They're great!)

I hope you’re as excited for M3E as I am and, if not, I hope you’ll keep an open mind going forward. This is going to be good, you guys. Come along with us!

Posted by AgentRock at 5:25 PM