5 Pregenerated Characters for your Through the Breach Campaign

One of the hardest parts of doing a demo game is putting together pregenerated characters. It's a time consuming, but necessary part of putting together a quick demonstration game. To help with that, here is a party of mercenaries that can be plopped into most games as necessary. Feel free to use them for demos, drop-in or replacement characters, or if your players just like and want to use them for whatever. I created them for Gencon several years ago as a mercenary crew from a failed contract town named Revival. They have good story ties to each other, but are free to be useable in a number of different game settings. If you do use them, just let me know how it goes. 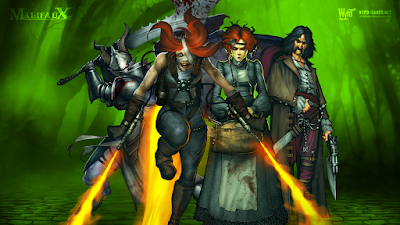 The Burnham family spent the last three generations rising quickly in the ranks of the Guild through savvy purchases and political gambits. By the time the second Breach opened and the call went out for workers to travel to Malifaux to start collecting the wealth of Soulstones waiting there, Thomas Burnham was in a prime position to become one of the first overseers to cross over.

He was assigned to Contract Town #8 - later renamed to "Revival" - and for a time, things were great. Money was flowing like water and the town's renown was growing by the day. To everyone watching, Thomas Burnham was set to catapult into the upper rung of society once his time at the mine was finished.

Unfortunately, the Soulstone vein running beneath the town dried up earlier than expected and Thomas was out of a job. He applied for a position at a new mine, but the Guild wasn't interested in paying him even a fraction of what he made at Revival, so Thomas bought the last rifle in the general store and convinced the town's sheriff, Logan Dimmer, to join him as sellswords for the highest bidder.

Logan complains endlessly about his joints and his back and how he's only working until he can earn enough money to retire, but Thomas has seen the glint in his eye; he knows a born adventurer when he sees one.

Unfortunately, their first job (cleaning Neverborn out of a portion of the Quarantine Zone called Beggartree) ended up costing more money than it earned, and hurt his reputation with the Guild. To try and avoid future embarrassment, he thought he would fill out their crew's ranks. He hired a few other mercenaries and purchased the contract of a convict, Mary Finnegan, who he suspects might possess an affinity for fire magic.


Logan is the sort of man who, from birth, has seemingly always been drawn to scenes of violence. Born the son of a Texas Ranger, he learned to shoot a gun and swing a saber about the same time he was learning to tie his shoes. He's seen action around the world: from exploring the darkest parts of Africa to traveling to the far east.

Logan came through the Breach and settled in the Contract Town of Revival as old age started to creep into his sword arm and arthritis into the wrist of his gun hand. He can barely fire a pistol straight anymore, but he can still swing a sword just fine, though he pays for it the next morning.

What he couldn't have counted on after becoming Revival's sheriff was the town's failure. Just when he was giving thought to setting down his guns and taking up a life as a farmer, the mines dried up and the people left. Forced to take up the mercenary life in order to fund his impending retirement, Logan is looking for one last job to get enough money to buy his land, and then he's going to retire.

He's joined up with the town's former mine overseer, Thomas Burnham, in the hopes that the two of them can watch each others' backs. The "Beggartree Incident," as the papers described the Revival Company's efforts to clear out the Neverborn from the Quarantine Zone of the same name, was supposed to be his last job, but the financial troubles it brought on them has only delayed the process. He's told Burnham he's only interested in getting the money he needs to retire, but the younger man keeps trying to convince Logan that there's plenty of work to be had for the two of them.

It's just like the young fellows to always be yapping their mouths and never listening to their betters...

Herman was abandoned on the steps of a London orphanage at a young age; exactly what happened to them or who they were is unknown. At the age of twelve, he was adopted by the local mortician and undertaker, Arthur Wipple, who needed someone with a strong back to dig graves. It wasn't what you would refer to as a loving home, but it was better than sleeping in the gutter (even if the occasional out-of-town gravedigging job actually required sleeping in a gutter from time to time).

Herman grew up strong but alone, and when his adopted father died, he decided to try his luck in Malifaux, reasoning that such a deadly place would have great need for a gravedigger. He was only on the job for a few days when his shovel started talking to him, telling him to travel to the badlands to a new contract town. Herman barely noticed the mine closing or the town going to ruin, as the demand for his services stayed constant throughout. When the town mayor, Mr. Burnham, asked him to start working for him personally, he thought of it as moving up in the world, even if it just meant smashing in the occasional head from time to time before digging the graves.

There are some who say that no Quince has ever done an honest thing in their life. When Fast Harry Quince was caught running a confidence scam in London, there were few who shed a tear over his arrest. His wife, Susie Quince, was one of those few.

Pregnant and with nowhere to turn, Susie scrounged as best she could before giving birth in an alley and giving her child over to an orphanage, where he could have a better life than what she could provide. She survived through desperate means, stealing food when she could and breaking into houses when she couldn't.

Eventually she ended up making her way to Malifaux, where she fell in with a bandit crew that had aspirations of joining the infamous Barrows Gang. Or rather, their leader had aspirations of being the  man to kill Parker Barrows and claim the bounty on his head, but that went south in a bloody way and Susie was the only one to escape.

She contemplated returning to Earth and was about to rob someone for a ticket out of town when she was approached by Thomas Burnham with the offer of a job. Susie didn't care about trying to make some coin by helping the Guild, but the young man next to him was the spitting image of her husband...with her eyes.

Feeling the long-dormant sting of maternal love welling within her heart, Susie reluctantly signed on with Burnham in order to watch over her offspring. She's still debating whether or not she should tell Johnathon that she's his mother, or whether it's better to keep that door closed forever.

Born in Ireland, Mary came to Malifaux as a young woman with no aspirations beyond someday taking over the ownership of her father's pub. She was happy to ply her hand at bartending, cleaning, and preparing food, though she sometimes found small burn marks on things she touched.

Everything changed after she spent an evening entertaining some customers with her singing voice, which Mary (falsely) believed was quite lovely. The regular patrons suffered through her performances out of fondness for her and her father, but when a new patron made a joke about how she sounded like someone strangling a cat, Mary saw the awkward expressions of the patrons and realized they had been patronizing her for years.

The anger rose up within her, and with it came the flames that Malifaux had gifted to her upon her journey through the Breach. The tavern burned to the ground, killing seven people and severely burning just as many, including her father.

Nobody was quite sure exactly how the fires started, which is likely the only thing that kept her from the Witch Hunters' attention. People seemed confident enough that Mary was involved, however, and that earned her a quick trial at a Guild courthouse and a sentence of life laboring in the mines. She was shipped off to the small Contract Town of Revival, where she spent a few months laboring in the nearly dry Soulstone mine.

When the last vein finally dried up, Mary was surprised to learn that her contract had been purchased by the overseer, Thomas Burnham. Despite her attempts to keep her growing powers a secret, he seemed to have his suspicions about her...and worse yet, he planned to drag her into the deadly Quarantine Zone as some kind of mercenary. She managed to survive that first debacle, but any hopes of a quick release disappeared, as Burnham seems set on continuing in this line of work and throwing her into danger. If only she had her freedom...