-The November FAQ came out. There aren’t a ton of overwhelming things here, but a few things were clarified. First of all, the so-called “Schrodinger’s Hungering Darkness” question that arises with the Death Contract upgrade, wherein Death Contract could potentially be triggered repeatedly when paired with Rising Sun. Specifically, you Huggy doesn’t die, so it doesn’t trigger Death Contract. Additionally, Trixiebelle can’t redirect attacks from charges or flurries to other models, as she is the only legal target for them, you can’t butterfly jump into melee to block a ranged attack, and moving “up to” a certain difference can choose to move 0”. There are a few others. Go read it yourself. What am I, your secretary?

-The Get Gourd contest winner was Rene Luthje (I don’t know how to put accents and/or oomlots on with my English keyboard, so apologies for their absence.) Here’s a link to the images. Congrats to the winner and those who get carvers. Sadly my strategy of “Run out of time and don’t carve a pumpkin” failed me yet again.

-Round three of iron painter started Monday. The topic this time is Stranger Things. So, good luck to those who are still participating. We’re all counting on you.

-The winner of October’s Malifaux Musings raffle is Moritz Hampel. I’ll be putting your stuff in the mail shortly. Next week I’ll let you know what’s up to be won in November. How does one with this raffle, you ask? Well, I’m glad you asked, because the answer is by becoming a Patron on our Patreon page. Just head over to patreon.com/MalifauxMusings, become a subscriber on any level, and you’re entered into the drawing!

-Finally, I'm writing Shadow and Void to full novel length for NaNoWriMo. Come join me on my page, and maybe throw me some support. Cuz god knows, I'll need it...
https://nanowrimo.org/participants/agentrock2021 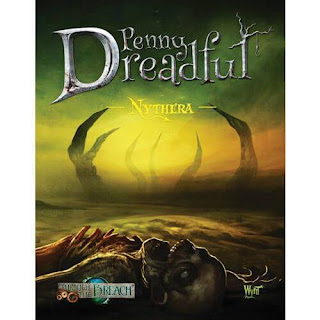 Through the Breach-Nythera: Or The Political Ramifications of the Discovery of Neverborn Ruins for the City of Malifaux.

Writing & Design: Mason Crawford
Additional Design: Aaron Darland
Editing: Brandi Edgmon
Art: Harry Fowler, Jorge Gomez, and Bram ‘Boco’ Sels
Released some time back, this book contains the material published during the worldwide event two years ago. It features the story of Malifaux’s discovery of a second ancient Neverborn ruin, Nythera, and the subsequent scramble by its players to claim it for its own. I played through this during the event itself, but the individual chapters have been collected and pooled together in a Penny Dreadful that is available on DriveThruRpg. Let’s take a look at how it all turned out. Also, if you’re a player, some spoilers may come out here.
The Nythera adventure consists of four acts and does an interesting job of taking characters from relative nobodies up to major players in the city of Malifaux. It literally begins with the misfit band being led to their execution on the Hanging Tree, just prior to their rescue by a pair of Wastrels with one foot in the Guild and the other in the Ten Thunders to do a job for them. The Fated are engaged to track down information on the newly discovered Nythera ruins and the efforts that people are taking to claim it for themselves. Along the way, they’ll have to retrieve Phillip Tombers from the middle of a firefight (literally) between two of Malifaux’s Masters, navigate between your saviors’ two factions as they try to pull you in separate directions, coerce a Brilliance addicted Friekorpsman to escort them into the badlands to Nythera itself, and eventually join a Friekorps assault alongside Von Schill while the winter witch Rasputina rallies her forces against you. In the end, it will come down to them to decide whether to release what is contained within or make sure it stays sealed forever. Either choice has consequences for the future of Malifaux…
The real highlight of this module is the amount of hobnobbing with major figures from the miniature game that occurs. Over the course of this adventure, the characters will come into contact with no less than 8 (and possibly 9) masters. Additionally, they plan a heist with Phillip’s Head (as an aside I, no joke, only got that joke when I played through this the first time,) enter an underground boxing ring, and encounter a wide swathe of the various creatures and nasties from the Badlands. Probably the most dangerous combat encounter comes at the end of Act 3, mostly due to the protracted combat against monsters with Black Blood (passive damage is very harsh in TTB), unless of course the players release [XXX Redacted by Order of the Guild XXX], in which case death is almost certainly assured. The investigation and journey through the wilderness makes up the brunt of the non-combat events. The module also includes stat blocks for 30 opponents in the “People” chapter, which greatly adds to the repertoire of what Fatemasters can bring to their games.
I liked this publication overall, but I have a few quibbles. For the most part, TTB goes to lengths to have the Fated have their own adventures without interacting with some of the more important Fatemaster characters. This serves a dual purpose, both by giving the Fated more agency and to avoid the feeling some players used to get when playing in established settings like the DC Universe or the Forgotten Realms where players know that, if things get too out of hand, Superman or Elminster can always show up to save the day. Additionally, if you keep the cameos down to a minimum, it helps to ensure that it feels special and cool when a character your players recognize pops up in the story. This module runs completely in the other direction. I thought it was fun, but I would understand why some people would feel otherwise. Also, to be honest, the second act of the story drags a little and likely is unnecessary to the overall story, as it mostly involves the players realizing and then confronting the Wastrels’ attempts to kill them at the demands of the Ten Thunders, but the rest are very interesting. Still, overall, I feel the plusses very much outweigh the negatives.
As an extra bonus, the module includes pre-generated characters which new players can use in the story. They’re a diverse group representing members of each of the factions, including an Ortega relative, a cyborg Doctor, and a human who was raised by pigs. One of my favorite parts of the Nythera event, unfortunately, isn’t included here, as the pre-gen characters had their own personal goals to complete every chapter when we were playing it live. Some of these were straightforward enough, but many were rather unorthodox like “make someone call you ‘Arizona’ during the game’ or ‘Squeal like a pig at someone until they demand that you speak English.’” Unfortunately, players will need to do a bit of adjustment to correct them for M2E, but they’re a good starting point.


So, in summation, I recommend this module for most Fatemasters. If you want your characters to go through the Malifaux equivalent of starting at the bottom and pulling themselves up through its tangled web of intrigues. It makes for a great self-contained story, and I honestly recommend cutting the campaign off after finishing the last Act and moving on to new Fated and a new storyline. So, check it out!
Posted by AgentRock at 12:03 PM