Through the Breach 2nd Edition 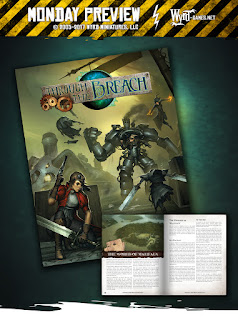 Last week’s Monday preview announced the coming of a new edition of the Through the Breach game. It may seem a little surprising, given that it’s only been about 3 years since the game initially came out after kickstarter, but I think most people knew the game wasn’t perfect in its initial iteration, so the initial reaction has seemed to be relatively positive. This is assisted by the fact that Mason and the Wyrd crew have worked hard to ensure that the game is reverse compatible with all of the supplementary materials and adventures published for TTB so far, a consideration that I honestly can’t recall another example of in the gaming industry.
Probably the most immediately notable change is the combination of the Fated Almanac and Fatemaster’s Guide into one book (another concession by Wyrd to reduce the financial burden of releasing a new edition. This all comes together in a 416 page beast of a book that has all the material a group needs to play the game. Along with this, the new Through the Breach Core Rules includes an expanded bestiary, filling up almost a quarter of the book and introducing enemies and signature Fatemaster Characters from each of the factions. These gribblies will get new tricks to throw at Fated in the new edition as well, with the inclusion of Fate Points. They give Enforcer level characters the ability to gain bonuses to flips, take additional actions, or heal damage. I think this helps them deal with the disparity Fatemaster Characters have versus Fated as a result of the latter being able to use twist cards to cheat fate. Cool. Additionally, the back of the book will contain an introductory adventure, which I’ve personally found to be very useful for players who are unfamiliar with the system or story of a new RPG.
One of the design goals for this relaunch of the game includes refocusing pursuits and bringing them in line with what has since been published in the faction books like Under Quarantine and Into the Bayou. They mentioned the Pioneer as one pursuit which has been retooled, as its original form was a bit scattered and…well…useless. Now it focuses on taking advantage of terrain, giving you a specific type of game session when one would want to take it on. Additionally, each pursuit now has a Rank 0 talent (like those from the splat books,) which help to reward players for switching Pursuits in response to the prologue.
Additionally, for fluff junkies like me, this book has it in spades. With over 60 pages detailing the world of Malifaux and its history, this book promises to be a treasure trove. I know one of the things I was really looking forward to in the initial version of the books was learning some new information about what was going on Earthside, what the Neverborn were doing before we arrived in Malifaux, and an explanation of some of the long-standing mysteries of the game’s background. Sadly, much of this information was lacking the first time around. These new versions promise to at least touch on this and even more, including recent events bridging the stories of Malifaux and The Other Side like the Governor-General’s recent mishap and transformation into the Burning Man. It even mentions discussing what happened on the night the first Breach closed, which has always been a mystery. So, yeah, you could say I’m pretty excited about this part of the book, and Through the Breach 2nd Edition in general.

Speaking of Through the Breach, there’s a new one-shot adventure up on Drive thru RPG. This particular story focuses on a quintet of Pregenerated characters working for their boss, one Chubbs Lacroix, who had his hand and favorite gun bitten off by a gator in the swamp. He hires the Fated to go hunt the beast down, leading to the usual array of mishaps incurred by anyone spending an extended period travelling through the Bayou. The story features run ins with a menagerie of swamp beasties and may even end in a meeting with the Swamp Hag herself. Check it out for $5.
Additionally, the Monday preview mentioned a worldwide campaign for Through the Breach coming soon. We don't really know much about it other than the title, A Stitch in Time, but given how cool Nythera was I'm sure we're in for some good stuff.

Come back later this week for a tournament report featuring my mishaps with McCabe in North Carolina.
Posted by AgentRock at 9:18 PM