We’re in the last legs of the Malifaux Divergent Paths event, and all in all things seem to be improving for our wayward newcomers. There were some real surprises this week in who won, and I imagine a couple of factions may be scrambling a bit to secure a hold on models they thought were thoroughly under their control. Phase 4 scenarios can be found here.

The Self-Righteous Man is free! Well, more or less. He’s been cleared of his charges, due in part to the timely intercession of M&SU Lawyer Amina Naidu on his side. Now he’s been recruited to Ridley and is studying magic with Sandeep, having gained an interest in the Court Procedure magic used to bind his werewolf spirit. This week’s scenario features a similar idea to the Trickster’s Period 2 Scenario, with a series of Tome markers being scattered on the board. Models walk to the markers, pick them up and, unless they flip a crow to indicate it’s a worthless book, then try to deliver it to the SRM in the middle of the board. So, get your interacting Don’t Mind Me models ready. Additionally, the library puts a “Shh” condition on models that take Cast actions which will gradually do damage to them, meaning you’d probably better find some alternatives or some condition removal (why the librarians are cool with gunfire and swordfights is beyond me.) The Arcanists’ win in week 1 and 3 mean they’re likely at an advantage to end up with the SRM, but I would imagine the Guild could make a good run at it in week 4 and steal him. I’m pretty interested to see how the model turns out as, again, I love the Court Procedure magic style.

The Trickster was making a new friend this week as well, though the Dreamer isn’t quite as wholesome a friend as the Arcanist lawyer. On the other hand, he can wave his hand and create painkillers out of thin air for her, so I guess I can’t blame her. After going on a little pumpkin-smashing expedition, Nytemare imbued her with a bit of his power as a fail-safe incase Titania decides to off The Dreamer. For this week’s scenario, she’s decided to take some of those reality warping powers out for a spin, calling some Malifaux folks together for a fight with a crew that might not be ENTIRELY real. You hire a crew of 60SS, but then your opponent gets to pick two of your non-master models to REMOVE BEFORE THE GAME. You do the same for them, of course, but wow, that is intense! And as if that wasn’t chaotic enough, throw in blind deployment on top of it. Wowzers. The objective is to kill models near the Trickster in the center of the board every turn, and it’s going to be an interesting one. I think it will be key to build a crew of independent, strong models for this one. If your crew needs to have a lot of synergies to function, you’re going to struggle here. Also, you’re almost certainly going to end up playing at less than 50SS unless you build a crew with no models that cost more than 5SS. Gremlins and other spam type lists might be interesting for this, as well as a summoner master to replace your losses. Your mileage may vary. In any case, I imagine the Resurrectionists will be pretty interested in making sure they win this week with her to ensure the Neverborn don’t steal her away (and get the Ancestor trait tagged onto her as well.)

Finally, the kid. Rusty Alice followed a couple of puppets she found murdering a merc back to her hideout and was going to kill her and her teddybear, but Leveticus interceded on the girl’s behalf. He’s taken over her education and put her to work salvaging scrap for him, and that’s where you come in. This board will consist of two scrapyard markers on the outer edge of the board and the kid in the middle. You need to grab the scrap and then carry it to the kid in the center of the board for VP’s. So, again, lots of maneuvering and interacting required here, and crews that form one central murderball are going to have a harder time with this. It’s kind of like an extreme version of guard the stash. Expect lots of Neverborn activity here for the reasons mentioned above for the Trickster. I particularly enjoy the boosts that the kid may end up getting from this week, as they all basically involve her finding some kind of trash that from another Malifaux model that she’s going to adapt for herself, her Teddy, or her little marionette friends.

Coincidental though the timing might be, I thought I’d walk you through some of the changes introduced with the new Vassal module v2.2 for Malifaux 2e. Ratty released this last week, and it improves things significantly from previous versions (and is very reassuring to those of us who wondered if maybe the module was not going to be updated again.) 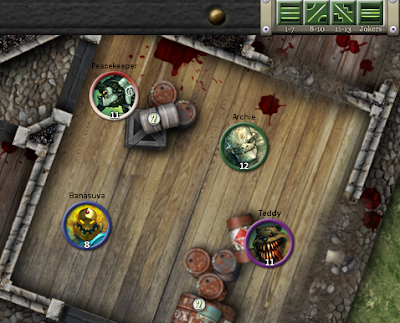 First of all, the puppet art is gone! I know a lot of people liked it, but it’s kind of dated (particularly given that Wyrd has sort of left Puppet Wars behind for the time being.) I think including the M2E stuff is a fantastic improvement! Additionally, the models now start off with all their wounds added to the model rather than having to be ticked on one by one before you start playing (this isn’t necessarily required, but it was considered good etiquette by most players to do this so your opponent could see how much more hitting a model required before it fell over.)

Second, all the models from Ripples of Fate have been added to the module. So all the new crews, models, and…stuff? I don’t know, I ran out of things to put third on the list. But the point is, it’s all there ready to go. No need to wait for the models to be released, and no more throwing out “Generic 30mm base” and renaming it. Good times.

Last, some quality of life changes. You can turn all the auras off with a simple command (CTRL+Period.) If you’ve played on Vassal enough, you know why this helps. You always have that one model with a 12” aura you turned on 3 turns ago, forgot about, and now can’t figure out how to remove or what size it is. The models have been rebuilt and the appearance of the arrow changed to stop them from wiggling so much. Essentially, the token always stays in the same orientation, but when you click on a token to move it there’s an arrow that rotates to show which way it will move. Plus, the Gaining Grounds 2016 strat and scheme cards are now available to be selected (it defaults to the book strats and schemes, but there’s a Gaining Grounds 2016 option in the drop-down to go find it.)


So Vassalfaux is back and better than ever. If you get a chance, you should go look Ratty up on the forums or A Wyrd Place and tell him thank you for all his hard work. Use it, go play those Divergent Paths games, and let’s see where these crazy newcomers end up once all is said and done.
Posted by AgentRock at 2:49 PM