I want to set that guy on fire. But I want to do it from over here.

It was a Saturday, and one of the rare times when my friend Jon managed to make the trek up to Lincoln for a game of Malifaux with me. I had been watching a match-up of Nicodem v. Ortega crew, and when I say watching, I mean trying to keep the two players from throwing down with each other in real life (seriously, if you heard their audio track alone you’d have thought that both players were somehow managing to lose the game and draw nothing but 3’s or lower while their opponent was tabling them.) Jon’s been a Sonnia player since he got tired of having to relearn Leviticus every few months back when he was getting FAQ’d pretty regularly, so I decided to go with some Neverborn action. As Jon had played very few M2E games, I went for Jacob Lynch, who I had heretofore not had any games with and who I had been itching to get out onto the tabletop (being a long time CCG player, clearly a master that lets you customize your hand to the level he does should result in me winning automatically. Right?) We lined our crews up. I advanced with an Illuminated and some Beckoners, confident that I would be spending a good portion of the game drawing enemy models across the board to me with Lure before mauling them to death with the Hungering Darkness. And then Sonnia went, and a third of my crew blew up. On the first turn of the game.

Jon and I exchanged a “holy crap, did that just happen?” look over the board.

And thus began what, I have a feeling, will be a rather lengthy love affair between myself and the Guild’s favorite Flamethrower (which, of course, is the source of the bastardized George Carlin quote titling this post.) I’m just going to put it out there. Sonnia blows things up in M2E. Like, a lot. She ditches 2 cards or a soulstone and pushers her cast up to a 9, which essentially guarantees at least a 2 point advantage over the highest unmodified defense stats IN THE GAME. This was a decent ability in M1.5. It is incredibly strong in M2E where the new soulstone rules prevent masters from pushing their defenses over top of the casting total. This would be a pretty decent boost in and of itself, but you pair that up with her primary flame spell being range 14 now, and you have a recipe for the rapid death of any models that have the temerity to leave their deployment zone at any point in the game. Pair this up with the fact that any enemy model which dies with the burning condition within 10 inches of her (I’ll say it again, ANY enemy model that dies within 10,) can be turned into a free Witchling for the low-low cost of 2 cards from hand or one soulstone, and you’ve got some upgrades for the master that I very much favor. The burning condition is now much more ubiquitous in the crew (in that it didn’t exist when Sonnia was initially designed.) Sonnia is now able to hand out burning with a tome trigger on her spells (something else to use soulstones for? I’m not going to end many games with these left over, I have a feeling), and as another bonus gets to ignore line of site when casting at things that have burning. 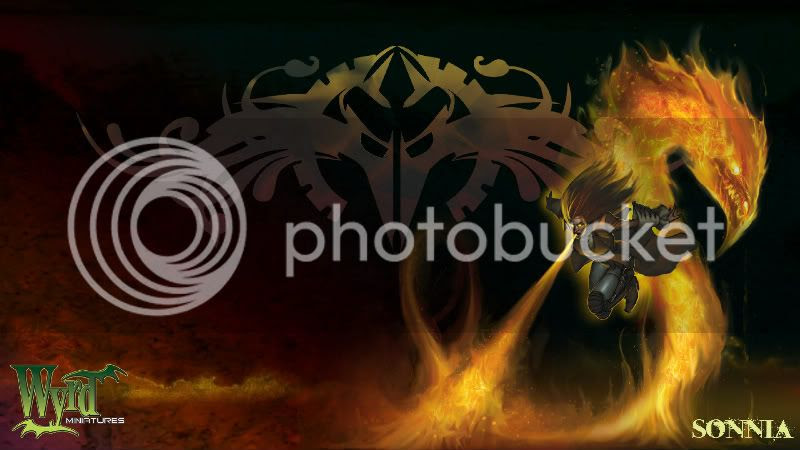 Maybe this whole “bonding with Cherufe” thing isn’t so bad, after all.

A tome trigger isn’t exactly the most reliable way to spread the gift of flame to the enemy, and this is where the rest of the crew comes into play. Witchlings in the previous edition of the game were the most efficient expenditure of points possible, bar none. This, I have to say, is no longer the case. At five stones they are still very cheap minions, but they have none of the resilience that they possessed in the previous iteration. What they’ve picked up in exchange is a Drawn to Pain trigger on masks that allows them, after they lose the resist flip on an attack but before they take damage, to push four inches directly towards the thing that attacked them. Unfortunately, their explosion now packs slightly less punch, doing only one wound. Their pistols don’t do that much damage, and they only have the disrupt magic ability if you buy it as an upgrade for one of the higher ranking members of the crew. The reason you want them is the fact that every time they damage a model on the board, they give that model the burning condition. Translation: their job is to go set things on fire so Sonnia no longer needs line of site to them and can make them explode from far away. Even in death they can accomplish this job, and as such I’ve been playing a bit fast and reckless with them, trying to get as close as possible as rapidly as possible to ensure the burning gets passed out. They also make lovely targets for dropping blasts at the enemy, obviously, though the one time I tried this in a playtest game the Witchling flipped amazingly while Sonnia flipped poor, resulting in no blast. They have retained dispel magic, which in my opinion becomes even more potent in this iteration of the game, given the focus on passing out conditions around the board. In summation, the witchlings are what they were likely intended to be from the outset, very cheap minions that set up the board for Sonnia to obliterate it.

Sam Hopkins, however, has not blown me away in the playtests I’ve seen thus far. I think he would have been more effective at his job had he been designed to help set up more burning on the field, but instead gains a number of bonuses against burning targets similar to Sonnia, IE ignoring line of sight and doing extra damage with his attacks against them. He can purchase an upgrade which will allow him to burn a target if it is within 1” of terrain, which I think is situational at best. The model’s biggest problem is probably the lack of anything to keep him alive outside of his unimpeded, meaning he’s going to be in deep terrain when you see him on the board. I’m not ruling out using him, particularly if you’re going to need someone to load the Witchling disrupt magic upgrade onto, but I’m not blown away either, particularly when compared to the incredibly stout Francisco Ortega at the same point value. Which leaves us with an interesting quandary: I’m leaning towards building a crew that can set up Sonnia to burn things most efficiently, but I want to do so without leaning the crew so hard in that direction that they’re going to be screwed if anything happens to her. How can we add some more hitting power in that will play nice with the theme we’ve built into the crew.

This is a flammenwerfer. It werfs flammen.

Ignores blasts. Puts burning on anything it damages. 10 range. Armor 1 (2 if you buy him a lead-lined coat). And when it dies it blows up and sets things on fire. So, a bigger witchling stalker? Yes, please! I’m a bit low on melee in this crew, but it occurs to me that a wall of Witchlings backed by a Friekorps specialist and Sonnia is going to be a hell of a deterrent when it comes to models moving in close. The little guys still retain the very decent melee attacks they possessed in their old form, so melee with them is still a bit of a dicey proposition. Plus, there’s nothing stopping this crew from adding in Francisco or some other melee guy to hold the enemy combatants up, especially as he can add in some needed speed with his positioning goodness.

So, in conclusion, I’m looking forward to spending a lot of M2E time setting things on fire for fun and profit. Sonnia was never a master that jumped out of the page at me previously, but she’s definitely caught my eye now. I had actually just picked her up in a silent auction before the start of the open beta, which I now have to look at as a form of kismet.

Now, to go learn how to paint flame effects.

Posted by AgentRock at 6:33 PM No comments: