As mentioned previously, the Guild was my first faction in Malifaux. Currently, I’m in the process of returning to them (and before you cry bandwagon, this process started before the good guys won everything at Gencon this year, so ease up.) I’m following the general theory of how to learn a master from the Mistakes Were Made podcast and aiming to play five games with each of them, with a side bonus to include as many of the models in the faction while I’m at it. If you want to follow my progress, I've added a link on the side to my hobby tracker spreadsheet, adapted from Bill Anderson's from back in M1E. Does that mean I’ll get to everything? Not likely, as I don’t own them all (though Vassal helps with that a bit.) Additionally, I don’t have Shifting Loyalties (yet) so it’ll be tough in the foreseeable future to include those. Hopefully I’ll manage to fix that as we get close to the date, but I can’t be sure.
The first hurdle to overcome is the simple fact that, as my first faction, the minis I already own look kind of bad. My painting has improved significantly since then, and my Perdita crew is literally based on some yellow static grass that’s just piled on it like hay. Not exactly sharp looking, and we can do better. Additionally, I wouldn’t mind getting a bit more consistency in basing styles throughout.
My Hoffman crew is already based on flagstones, and I don’t want to change that primarily because my metal Peacekeeper is pinned to one and I don’t want to risk breaking it by taking it off and rebasing it. The rest of the crew I want to get out of the city and into the badlands, mainly so they’ll jive with Perdita. I decided on how to do that some time ago, using Games Workshop’s Agrellan Earth special basing paint. There are a number of videos on how it works, but the basic idea is that this very thick paint will crack and break apart as it dries out, creating a kind of crumbly desert texture. I’ve seen it used for a lot of different basing styles, ranging from literally magma to frozen tundra. Inspired by the first of those, I tried to develop the magma bases by painting dark red, bright red, orange, and yellow on the base first, then adding the Agrellan Earth, letting it dry, and then picking some of the dried pieces to make it look more broken. A drybrush of black to make the earth look scorched, and we get what I put below. Not amazing, but I think it’s decent. I have some scrub that I’m going to drybrush with the black and some flame inserts I’m going to throw on to punch them up. 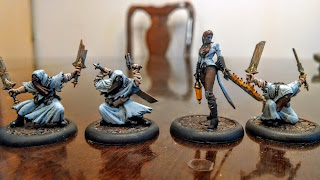 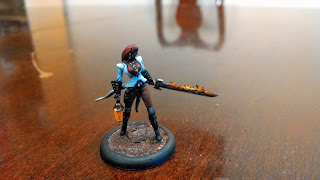 Going from this, I’m attempting to keep the theme similar for the Ortegas but sticking to the desert theme without the flames crawling up from underneath. So, off of the hay bale bases with pliers came the Ortegas (including my poor Nino, whose foot is long lost to the ages and will possibly need a greenstuff pegleg or something.) Onto some new spangly bases from the multipart kit that don’t have the slots to cover went some Agrellan Earth, followed by some GW Flesh Wash to bring the recesses out, followed by the minis. I’m not entirely sold on how this looks right now, and may end up switching to a more brown wash and drybrushing on some more of a sandy look (though that said, the Arizona Red Rocks thing is kind of cool also.) I’ll put up more photos as I get closer to it. I use Army Painter’s tuft basing tools right now, though I’m open to ideas if people have better ones.

Next hobby night is going to focus on getting some paint on the models. The Ortegas are all painted except for Papa, who has never gotten past primer (I’m looking to correct this.) What paint they have, however, is very flat, no shading or ink washes, just one color slapped on to get them to tabletop level. I’ve thrown some flesh wash onto Perdita and Abuela already (she has eyes and facial features rather than a flat peach color, who knew?) and will proceed to pick out details and get them looking sharp from there. I want to try and sneak red onto all the models somewhere if I can as a way of unifying them with a sort of color scheme, so look for that in the future as well.
Once I’m down with the Ortegas, I think I’ll try to get the rest of Sonnia’s people together. I’ve never been a huge fan of Sam Hopkins, but I don’t think I’d be doing them justice if I didn’t get him painted and on the board. I don’t own a Witchling Handler, but I’m curious if I could build one from the Multi-Part sprue. I feel like I have half of a Hoffman crew by only owning one of the old metal boxes. I’ll look to add in another Hunter and Watcher, as well as maybe some Wardens, in the future. The Watchers will definitely be a priority, as they’re huge for Perdita and Sonnia as well. I don’t currently own Lucius, which is kind of a crime considering my two factions are Guild and Neverbron, so I’ll have to figure out some way to get one prior to the end of this. I have all I need for a Guild McMourning painted and ready to go now, so that may see some table time while I get the others up to non-embarrassing status. And then there’s Lady Justice who…well…let’s just say there may be a surprise with her in the future, related to the good doctor’s ministrations…