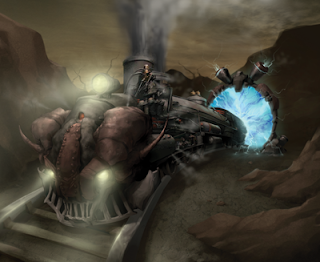 
What happened to Trask and his cache of plundered soulstones is the subject of much speculation and legend among the folk of Malifaux, today. Any attempts to recreate the Locomotive have failed, as the notes left behind by the engineers seem to be no more than the ramblings of madmen, so most sane folk who know the particulars of the story assume that the device simply exploded and destroyed everything onboard. The Guild is more than happy to accept this explanation, and Trask’s expedition is considered to be officially lost with all hands in the space between worlds. Expeditions to search for it are flatly discouraged. However, Travelers in the Badlands have repeatedly told tales of hearing the haunting sound of a ghostly train whistle echoing in the night despite being miles away from the closest railroad tracks. Rumors abound that one or more of the Lieutenants’ weapons have been recovered and used in scraps in and around Malifaux proper. The engines in the locomotive used up soulstones by the barrel when running at full burn, and Trask’s logs recorded his supply train as carrying enough fuel for three round-trips. Anyone who could find it would be instantly rich beyond his or her wildest imaginings, so expeditions still form from to seek the legendary Spectral Line in the wilderness. For the time being, however, none of them have found anything besides dust and frustration. It seems likely, however, that one way or another this horde of soulstones will be found if it still exists. The only question is how many more souls will be ground beneath the wheels of Trask’s locomotive, first.
Posted by AgentRock at 3:42 PM No comments: