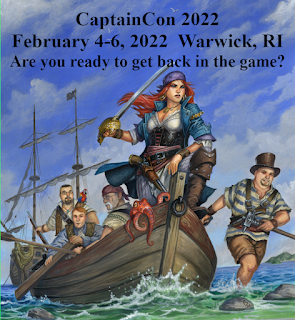 Your intrepid bloggist is here, checking in from the Charlotte airport during my lay-over as I travel to CaptainCon. This isn’t a convention I typically attend, but the folks organizing the Malifaux events there were kind enough to invite me to the Malifaux Content Creator’s Invitational tournament. Apparently, my spotty publication record over the last several…years doesn’t disqualify me from attending, so I’m en route. By kismet, the main Malifaux tournament at the con has also been tapped to be the first qualifying tournament of the upcoming US Faux Tour season, so I can get on the “official” rankings while I’m in Rhode Island as well.
One problem, of course. I’m probably pretty terrible at Malifaux these days.
I still enjoy the game, and I don’t mean to imply that I’ve somehow scaled back my participation voluntarily. COVID paired up with the nearest tournaments being an hour and a half drive away (with a healthy dash of real life obligations) has limited my reps somewhat, and so I can’t say I really expect to throw down with the heavy hitters in this thing. I’m working on setting up a partner near to home to play with, but he’s painting his crew (he plays Bayou and bought out someone's collection at a discount) and every time we try to schedule a game it seems like something messes it up. As such, I’ve only really had Vassalfaux reps in recent history, and even those have been somewhat limited.
So, to say that I expect to podium would be an extreme exaggeration. Thankfully, I’m not on my own for the MCCI. It’s a team format tournament, so I reached out to my friend and sensei Jon Goulbourne to be my partner for this thing. He has far more tournament experience than me, having spent years during M2E and M3E trucking up and down the eastern seaboard for games (we often call him the master of the Wandering River Style). He’s got a little rust to knock off as well, but he’ll be further along than I am in any case.
To prep, we adopted a plan to try and focus on getting as many set-ups of games in as we can, and I think it’s a pretty good one to get some reps when you’re on a time crunch. Essentially, set up a game, play the first couple of turns, then re-rack and start again. Often, the opening of a game can determine how the whole thing will play out, particularly in a tournament environment where you can’t guarantee you’ll be able to play the full 5 turns anyways. Also, if you’re trying out a new crew build and want to see if the concept has legs, this is a good way to find out and look for obvious flaws. I highly recommend it. 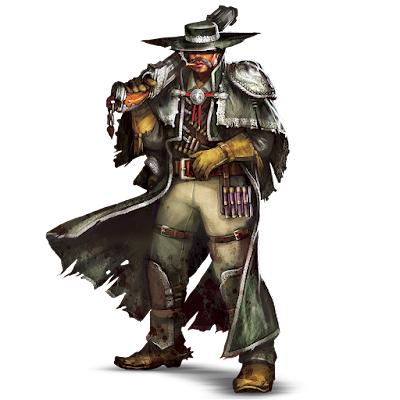 The second part of the plan is to limit the amount I had to learn prior to the tournament. That means focusing on one master and their keyword, learning what works and what doesn’t, and taking advantage of the fact that there is a repeat in the strategies in round 2 and 3. Both of them have Turf War (itself a relatively straightforward strategy), so if I can potentially put my best foot forward in those games I can carry my weight without needing to master the full breadth of the game. I had originally planned on going with new Perdita as my master of choice, as I like the summoning and card cycling mechanics of the Monster Hunter version, but a different Guild master ended up as what I landed on. I’ve liked Basse for a long time both in game and outafter learning about Basse Reeves, the historical figure he’s based on (he's worth a Google if you're unfamiliar). I think his keyword is deceptively mobile with their Home on the Range and Rough Riders and still has some significant punching power on the tabletop. I have a personal connection to them as well (or, more specifically, to the Sandworm) that makes me want to get my own personal Graboid out for a spin. After all, Soulstone Miners are pretty solid, so who wouldn’t want a tunneling model that can also destroy markers and terrain when he pops out of the ground?
I decided to go Guild rather than Explorers with him since I have far more access to that faction, though the Intrepid Emissary paired with the sheer number of simple duels in Frontier and Wastrel at least got me to give them a look. Plus, Lead Lined Coat is jut good. *shrug* Not much else to say about that. I don’t love Explorers’ upgrades and I don’t have as much of a feel for what versatile or off-keyword models would be good hires, so it made sense to stay with the law-and-order faction. If there’s been a hole in my game since my time playing the Ten Thunders it’s been the killing part of the game (concentrating fire, target priority, etc) so it made sense to grow my skills in this area by playing a crew that is looking to dish out pain while covering for my deficiency by using a faction that has above average offensive capabilities. That’s not to say I don’t have a fair share of tricks, too, as there are a few toolbox models in the Guild that can pull off some disruptive plays to break up the enemy’s gameplan (The Undercover Reporter, for instance) or accelerate mine (Sly Six-Shots from the Perdita Malifaux Burns box brings a more useful source of False Claim than the faction has previously had available).
But, yeah, I’ve got no illusions that I’m going to go win this thing. Hopefully I can play some fun games, learn from my mistakes, and not end up with a wooden spoon. Check in over the weekend, as I’ll be trying to post more updates from Captain Con as it goes along.
Posted by AgentRock at 11:55 AM