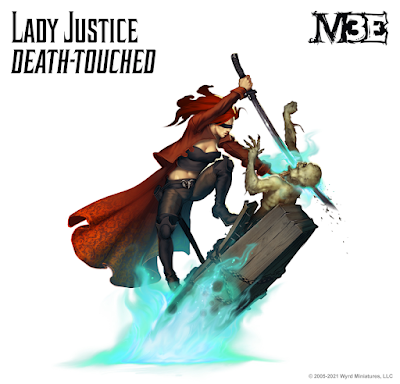 A not entirely unfounded opinion is that the Guild did very well in the most recent rulebook Malifaux Burns. Not exactly a shock, I suppose, given that they were considered to be somewhat under the power curve before this book came out. There were several things that jumped out at me when I read through the book the first time as potentially “good” or “dangerous.” Some I missed (Bashel is apparently pretty scary and I initially thought that, since he wasn’t a summoner, who cares). But one that tingled my spider sense was the new Lady Justice, Death Touched. And last week I asked a few questions of Matt Lewin, host of the podcast Flippin’ Wyrds (on the rare occasion they post a new episode) and he let me know this may be one of the things people can really have a bad time with, when they aren’t prepared.
The base theory is pretty simple: it’s tough to lose to a model that isn’t on the table. The crew focuses around the use of various versions of the Pine Box action, an action which is cast versus the opponent’s Sz and, if it succeeds, buries them and applies Distracted. Every turn, the buried gets a chance to escape with a WP duel against a TN of 13. If they succeed, or if the model that buried them dies, they pop back out. Lady Justice Death Touched lets the Marshals take 1 wound, drop a coffin marker within 1” of them, and then attempt the Pine Box action against a model within 1” of it, allowing some additional force projection and letting you block up parts of the board with these coffins (hello Research Mission.) Additionally, all of Lady Justice’s attacks can target these buried models, which creates some nice efficiency. The hard part of playing a melee master like Lady J is getting them to the enemy to hit them. So, you know, being able to smack things from anywhere on the board is pretty useful. Charge to a spot you need Lady J to be, hit a buried model, then continue on with her turn (potentially dropping a scheme marker you just moved into position for, for instance.) Even if her crew is having trouble getting things buried she can join in, as new Lady J has a 6” ability toss a coffin marker and bury an enemy model. And on top of that she’s HTW, Regen 2, and potentially Armor 1 with a LLC.
Several support models help to enhance the power of this crew. The Jury is one of the biggest ones, as her Exorcism Ritual ability does a ton of work when she activates, dealing 2 damage to every buried model. She can trigger more Pine Boxes as well with her Obey. The Brutal Emissary’s Into the Cage attack isn’t a Pine Box and doesn’t make coffin markers, but it’s a Stat 4 versus size (get in the box, Euripedes) and doesn’t have a claw symbol, meaning its unaffected by any melee specific defenses. One of my initial concerns was that the crew may be a little bit on the slow side, but the fact that the coffin markers make enemies with 1” count as Undead can help to offset that, since it lets Death Marshals gain Fast when they activate within 6”. The keyword’s new model Thirty-Three fits nicely with this, as she brings her own Pine Box, can target buried models with her Peacebringer, and has Incorporeal and Slippery to let her do a little bit of scheming on her own.
The crew is surprisingly durable, with HtW on many models and Lady J having access to a Shockwave heal. Several models are going to have access to stat advantages versus the size of most enemies, and most crews don’t have a good answer to get them back out again. Coffin markers can close off parts of the board and making the enemies count as Undead usually gves boosts to Marshals. And the bottom line is, a model that is a problem is no longer a problem if its buried. Jedza preventing you from killing members of her crew? Bury her and there’s no more issue. Hoffman shoving pylons around that do insane amounts of irreducible damage? Not if he’s buried. Pandora screwing up your activation order…you get the idea.
The risk is there for an NPE from this crew (negative play experience). I know that Matt said he’s 1) not lost with the crew yet and 2) the general opinion is that they would rather play a game they enjoy than play against this crew. Now, there are solutions. It’s not an unbeatable crew by any means. A crew that isn’t built around any particular individual models will do better than crews with a lynch pin you can bury. If you focus fire on the Marshal that has buried something you need back, that’s going to help. Blowing the coffin markers up can help clear out the board to help avoid the clutter and restricted movement. Etc etc etc. Not an overpowered crew by any means, but something that could really make for a bad time if you aren’t ready for it. Thus, why I thought it was worth an article. Be aware that this crew is out there. Think about what you’re going to do when you’re up against it. And thanks to Flippin’ Wyrd’s Matt for sharing some thoughts about the crew, as well as the below crew list.
Death Touched J List (Guild)
Size: 50 - Pool: 4
Leader:
Lady Justice, Death Touched
Lead-Lined Coat
Totem(s):
Scales of Justice
Hires:
Thirty-Three
Death Marshal
Death Marshal 2
Death Marshal Recruiter
The Jury
Brutal Emissary
Posted by AgentRock at 10:54 PM