How to Cheat at Malifaux 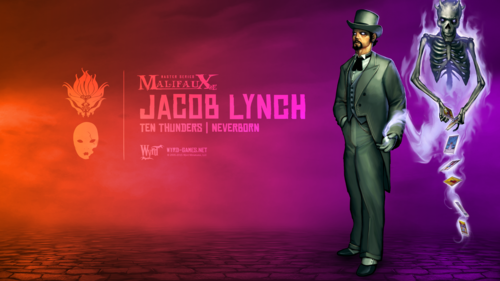 -A worldwide Through the Breach campaign starts on Monday. It’s titled The Obsidian Gate, and seems to be either set earthside or at least related to The Other Side, as the pregenerated characters are representatives of each ToS faction (including Kimon and the Three Kingdoms. Did we know those were factions? Is this news?). Participants play through a free four act adventure, reporting the results on Wyrd’s website. Additionally, the character that is played the most will become an adjunct for their faction in ToS. Sign up at this address and play in some Asian themed Through the Breach action.

- An FAQ was released for March with clarified some of the issues that have come up since Gaining Grounds 2018 released. Follow the link to read through them, including clarifications of the Supply Wagon, Inescapable Trap, and Surround Them questions.

I recently bought and read through the PDF version of Under Quarantine, the Through the Breach supplement detailing the Resurrectionists and other hazards of the quarantine zone in Malifaux. The background/fluff section goes through each section of the Zone and discusses their unique qualities, including the plague warrens, a section overgrown by Knotwood trees (and the Neverborn that come with them), and a mostly flooded/bayou like zone that would be a good homebase for down-on-their-luck Fated, as it serves as a literal and cultural estuary where humans, gremlins, stitched (undead characters), and even Neverborn can intermingle. Did you know Parker Barros’ brother is the de facto mayor of one section of the QZ, and ripping off his family to take over part this part of Malifaux city is what drove Parker to banditry in the first place? You can read about it here. Additionally, it provides information about the Necropolis beneath the city and tunnel environments in other parts of Malifaux. The Lampads, a current flavor du jour of many Resurrectionist crews, were first introduced in this book as creatures from a city in the Northern Hills that is perpetually on fire!
For rules content, the book introduces a new character generation tarot, the Lifeline Tarot, that includes a character having a brush with death (from which they may not have escaped), allowing you to play a character with a close tie to the energies of life and who may, in fact, be an undead creature. It also contains a number of new pursuits. The Alchemist is a pursuit that gives you some of Rafkin and/or Sebastian’s abilities to manipulate the Poison condition. The Ghost Eater lets you manipulate Chi ala Yan Lo or the forthcoming Manos. And, of course, you couldn’t do this book without a Necromancer pursuit, in this case one inspired by Nicodem that includes elements of magic using and commander style pursuits to let you summon and order around a horde of the Undead. For those who don’t necessarily want to go that dark with their character, the Bully lets you use intimidation magic to strike fear in opponents during combat and the Sawbones is a doctor that you’ll be seeing in action if you play in the Obsidian Gate campaign, being used by a character with a very familiar name.
Later, the book introduces some additional rules for Through the Breach. There are a handful of new Magia and Immuto for spellcasters, per usual for these books, as well as some new unique Grimoires (one of which is a zombie who follows your character around and tells you the spells, which amuses me greatly.) A section details alchemical compounds that can be made with the Alchemy skill. There are a lot of General Talents to try out, including one that lets you remove a card you don’t want from your Twist Deck (take that, Ace.) Fittingly for a book titled Under Quarantine, there are a number of new diseases introduced in this book. Some of them are relatively mundane (want to know what it’s like to catch tuberculosis or polio in Malifaux? There’re rules for it here!) Others are more exotic and iconic for the world. Specifically, rules for corruption and slow transformation into a Nephilim by Black Blood are introduced here, rules for Fated who are addicted to Brilliance (ending in the Hungering Darkness coming to find you and turn you into a Depleted, fun times!), and finally a condition called Haunted for characters that spend too much time around ghosts or other angry spirits. Finally, the book finishes off with a great big pile of Fatemaster characters from all the different thematic elements in the book, from the expected (undead, undead, and undead) to some of the less obvious (various rat-related things from Hamelin’s oeuvre, employees and clientele of the Honeypot casino, and some miscellaneous tunnel dwellers from the Northern Hills.)
This book is solid. The maps of the city from the core book or other Malifaux products show that here are multiple Quarantine Zones, but this is the first product I’m aware of that goes into each of them in detail. There are a lot of cool new character options for players and new threats for the Fatemasters to throw at them. If you’re into Through the Breach, I’d definitely recommend giving this one a look.

I’ve always liked Lynch. That’s not a secret. Partially this is because I’m a fanboy of his, and partially because I like having better cards than the person I’m playing against. I’m a little more reckless than most with my hand, so it’s nice being able to do that with the knowledge that I have Woke Up With a Hand and Mulligan waiting at the end of the turn. Picking up the Aces. Getting the free henchman. They were all good stuff. I come from a CCG gaming background, so card manipulation appeals to me. But still, he’s not super fast. He deals a lot of damage, but that’s about all he does well. Huggy is good, but his defense of 3 is a real liability even with Incorporeal. You could get around it by using him as a disposable missile and bringing him back via Rising Sun, but the bottom line was there were probably better options in Neverborn that could do similar things.
Enter Book 5, and along with it the upgrade Cheating Bastard. It gives Lynch two abilities. One is kinda cute, where you reveal one to three masks from your hand at the beginning of his activation. One mask lets you hand out Brilliance automatically to a model within 8” of Lynch. That is not insignificant, as much of his activations revolved around forcing a model to be hit by Play for Blood to set up the finishing blow Final Debt prior to this, which of course always leaves the possibilities of getting screwed by the deck. Two masks lets you drop a pair of scheme markers, one in base to base with Lynch and one with Huggy. The third lets you heal everybody in your crew. It’s not likely to that you’ll have the three (hell, two has been tough in some of the games I’ve played) but it’s useful for the auto-Brilliance if nothing else.
The reason you would bring it (it is a limited upgrade, so it means no Rising Sun or Endless Hunger), is the other ability. This allows every friendly model within 6” of Lynch of HD to cheat second regardless of the initial flip. This is major. You haven’t lived until you flip a deuce on the initial flip of a Lure from one of your Beckoners, your opponent asks if you want to cheat, and you reply “I don’t know. Do you want to?” If you make a little smug smile while you do it, I think you get extra points. It throws opponents off base, breaking one of the fundamental rules of Malifaux. It is VERY strong. And, it’s a 6” radius aura. From BOTH OF THEM. That’s 24” of aura, plus an inch for Lynch’s base and 2” for Hungering Darkness. That’s a pretty good chunk of the board covered. I’ve always bumped up against bubble crews, because they tie your movement up too much and make it difficult to function. If, however, you have a pair of them, your crew is a lot more free to spread out and do what it needs to do. I like this upgrade quite a bit, and it’s made me want to get my Lynch models out.
I’m still not sure that he’s better in the Neverborn than in Ten Thunders. Recalled Training is just so good, and the support models in 10T are better overall. The Neverborn tend to function more independently, and like I said, Lynch isn’t going to break any speed records anytime soon. However, Lure is an effective way to get around this problem, and it just so happens that Mr. Lynch has some pretty solid Luring options with his Beckoners. I’m not sure if Lilitu isn’t still a better option even after the reduction in cost to the Beckoners, but they can hand out Brilliance to support the Lynch/HD attacks while they’re at it. I’ve got some experimenting to do to find out which way I prefer it, but a crew that is designed to drag an enemy out of position across the board and kill them. It’ll work well for some games, but maybe won’t be great for games where you have to move rapidly across the board. Symbols of Authority is going to be a struggle for them, for sure. But still, I’m interested in it, and I thought I’d share with you guys. And also, it let me dust the banner off again.

Posted by AgentRock at 6:16 PM