I travelled south to Durham for the Treacherous Ties Tournament hosted by Sassylady, admin of the Southeastern Malifaux Players group, last weekend. The planning for this tournament had been going on for a while, as Phiasco and I played in it last year, took second, and had a lovely time. I don’t get to go to all that many tourneys, but I’d set aside time for this one. We were going to play Ten Thunders as we had done previously. I’d painted Gwynneth Maddox, a Terracotta Warrior, and a Ten Thunders Brother to take them out for a spin. Our team name was Sex, Drugs, and Malifaux because were basically just trying to cram as many Illuminated into a list where Maddox was spreading the Brilliance around. I was even going to blacken my eyes in and wear a suit, to cosplay as Lynch. It was gonna be great.
So, of course, the tournament format changed the day before.
Too many partners flaked out at the last second, so Dawn changed it to a standard single-faction individual tournament. Then, they changed strats and schemes to 2018, so I could go ahead and toss any of the thought I’d put into pre-building crews in the dumper as well. And, of course, when I asked Phiasco if he was ready to redesign his stuff on the fly for the tournament, he texted back “Yep, I should be good to go for next weekend.” Because he had his days mixed up. So I was going to be there by myself…

I considered skipping, as Atomic Empire is three and a half hours away and my main reasons for attending were now gone, but I’d been chatting with Dawn about the tournament, had set aside the time, and had made a plan. My wife said “Don’t you need to go for your Malifaux blog?” So, with that permission, I rolled out of the sack at 6:15 to make the drive to Durham and play Malifaux. I figured that it would, at the least, be a good end to the all-Neverborn fall season I’d been undertaking. 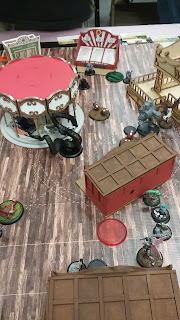 Round 1 was played on a carnival board. It was standard deployment supply wagon with the scheme pool Guarded Treasure, Dig Their Graves, Undercover Entourage, Search the Ruins, and Take one for the Team. I played against Kemp, who brought the Brewmaster, a Whiskey Golem, Thunders Emissary, Wesley, some Akaname, and a Tanuki. I thought the action might concentrate in one area, so I brought Titannia with Pact, Behold, and Audience, Barbaros with Thousand Faces, the Mysterious Emissary with Titannia’s conflux, Doppelganger, a Young Nephilim (cheap bigger based model to push the cart), and a couple of Changelings. We set up on opposite flanks and pushed our carts more or less unopposed into the other side of the board. Combat was joined as the Whiskey Golem, who I had underestimated in terms of sheer killing power, stomped over and punched my Emissary to death. Titannia went in to hold him up, but the rapid healing ability of the golem in a brew crew meant he could outlast her. Thankfully, I was able to reroute Barbaros to go finish him off and start holding points. I was using a combination of Changeling and Dopp plus Changeling and Barbaros to score a couple of points for Guarded Treasure, while scooping up a handful of the Scheme Markers that Titannia had dropped while fighting the golem for Dig Their Graves. Finally, it came down to Chiaki tossing my wagon back over the center line while I tried to find a way to get a Changeling to do something meaningful to score me another scheme point on the last turn. He couldn’t get free to drop a marker for Barbaros to pick up Guarded Treasure. He couldn’t get close enough to an Akaname to kill him with his own attack. I was beginning to think a draw was inevitable, but Kemp pointed out that I could hop the Changeling within 3” of the Thunders Emissary and copy his attack to blast the Akaname, killing him for Dig Their Graves and scoring me the point to win 6-5.

Round 2 I played against Alex Schmid. You may know him from his Youtube videos, here. Or, you might have known him from this.

So, yeah, an uphill fight, to say the least. First thing I did was start setting my models out while he was still list building, which is a rookie mistake. We were on a swamp board with lots of open terrain, and I joked about how that would be critical to all the shooting our two Neverborn crews were going to do. Because, again, I’m dumb.
The strat was Ours! in Flank deployment. I don’t remember the scheme pool, because it didn’t matter what schemes were in there, because I got housed so hard. He played Collodi with Fated and Strum, a Changeling, Mysterious Emissary, Freikorps Trapper, Brutal, Shadow, and Arcane effigies, and some Marionettes. I had Lillith with Beckon and Wings, Dopp, Nekima, Graves, 2 Depleted, and Changeling. I had intended on using the Depleted to tie things up for Hold their Forces and for Tangled Shadows bait. I was having a grand time pushing things around by copying Graves’ show you the door ability, when I learned what happens when you push into range of a pair of Changelings standing next to Trappers. Hint, it doesn’t end well. I thought my best chance was to try and pull Collodi out of his crew and send my beaters into his backline to try and smash them up while he wasn't there to buff them. Unfortunately, that left Lillith to deal with Collodi on her own, which she doesn’t do well with a WP of 5. Nekima and Graves got tangled up in a pile of Marionettes who would then push out of range to let the snipers shoot Nekima to death. It was basically a shit-show. I called it after t3 because I was obviously not going to get anywhere. For a little extra salt, in Alex’s battle report he said I seemed like a newer player, which I think he meant to be kind. To be fair, that’s definitely how I played. Feels bad, man.
We chatted afterwards for a while (turned out we had some time on our hands, haha *kill myself.*) and he’s a nice guy. He gave me some Collodi tips that I’ve since put to good use. We’re facebook pals now. You should go chat with him and listen to his Youtube videos or listen when he makes guest appearances on Max Value. You might learn something (without having to get pummeled 10-1 first.)

Aaaanyways, Rd. 3 was next. Knowing I was well outside any shot at winning anything for this tournament, I decided to have some fun and get my Gwynneth on the table (I did take the time to paint her, after all.) For this game we were playing corner deployment Symbols of Authority with Punish the Weak, Dig Their Graves, Inescapable Trap, Take Prisoner, and Vendetta. I knew my opponent was playing Hamelin, and Plague Pits basically meant “Get your scheme points, cuz you’re not getting anything from the strat.” He had…Hamelin stuff. It was basically a theme crew with no Benny Wolcomb. I don’t remember. They all kinda die and recycle anyways outside of the master. Clint was my opponent’s name, and he was playing Hamelin for the first time (to be fair, I've never played against him, so we were on equal footing). I took Lynch with Cheating Bastard (!) and Wings, Huggy with Malifaux Provides, Maddox with Thousand Faces, a couple Illuminated and a couple changelings. We set up across a carnival from each other and deployed our Symbol markers in triangles with the point aimed towards the opponent.
I was, basically, hoping to bait him forward into the kill zone and take his crew down there while sending Illuminated and Changelings to go run strat. Against Hamelin I figured there would be no shortage of easy things to kill for Dig Their Graves and Punish the Weak, so I took those schemes. Cheating Bastard would hopefully help me spit out scheme markers to help complete the former scheme. It…kinda worked. They flooded forward into the kill zone conveniently, but Nix managed to jam me up by blocking pulse effects (like Gwynneth's Come Play at My Table). Also, he doesn’t take conditions, so no making him Brilliant to deal with him. Basically, I was not going to be killing that stupid dog. I did, however, pick off a bunch of his weaker stuff to get the job done from a killing standpoint (though, Hamelin obeying Gwynneth to remove the Symbols marker she was defending was a bit of a low point.) I did realize that I could turn 1000 faces into Fears Given Form and walk Maddox into the middle of a cluster of stuff to make Hamelin sad, but he responded by Obeying me to walk back out. Sad face. Unfortunately, my attempts at running around the flanks were foiled by Wretches throwing rats at me, tying my dudes up and preventing me from scoring. Worse, I cottoned on to the fact that my opponent was setting up for a Vendetta on one of my Illuminated and building Blight through the roof on him to get it done. Thankfully, I managed to get that Illuminated out of there and save him from being killed by a small child. I scored six from the schemes and 1 from the strat for still having markers left at the end of the game. I managed to hold my opponent to three VPs, so I won 7-4.


2-1 isn’t a terrible record, but with a diff of -5 I only ended up at 6th out of the 11 people present. Still, a day playing Malifaux is better than most other days, so I had a good time. Also, I picked up some pointers on how to play Collodi properly and made a new Malifriend, so that was a good use of time.
Posted by AgentRock at 1:48 PM