The Other Side Kickstarter: Update 1

The Other Side kickstarter campaign is up and running, and it’s going like gangbusters. They’ve funded within the first half-hour of being live, and are now creeping up on their $175k stretch goal. As such, we have a bit more information released to add to what we know of the game. 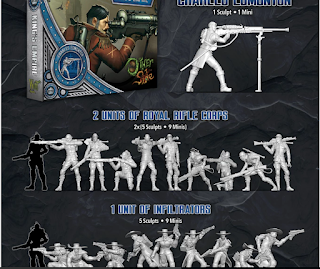 They’re offering, at the outset, an allegiance box containing a commander, 2 units of a standard troop type, and a unit of more elite troops for each of the four Allegiances. Additionally, you receive several tactics tokens which are specific to your allegiance, a fate deck, bases, and a tape measurer. If you back at a Commander level you receive the Allegiance box, your army’s titan, a copy of the rulebook (which will now all be hardcover), and all Commander level stretch goals. From there you can move up to a double and a quadruple commander level to get the equivalent of two or four factions for a reduced price. Pretty straightforward. Additionally, there are add-ons you can pay for any of the models or accessories to be thrown into your order individually if you want to expand your forces. As it stands now, all the stat cards you receive from as a Kickstarter backer will be the sort of special-edition UV treated type Wyrd started offering for Malifaux last year, which won’t be available for sale after the Kickstarter ends. Also, one of the add-ons that were unlocked as a stretch goal are allegiance specific fate decks which have your army’s logo on the back and some pics of the models on the front. Cool.
Additionally, the $150k stretch goal update on the website told us some more about the Gibbering Hordes specifically. They seem to be VERY oriented around terrain in general and the Tide Pools they place at the beginning of the game specifically. Their revealed commander, the Stormsiren, embodies this by placing one additional tide pool at the beginning of the game and gaining bonuses to her melee attacks when she or her targets are in contact with the pools. Which, of course, means you would never go anywhere near them, right? Well, problem is she has a Lure type effect to either pull your fireteams either to her or to a Tide Pool. The Hordes’ troops, has Adaptive Camouflage to let them flip two cards on opposed duels and choosing the best (IE a + flip.) We also get an idea of what it means to go into Glory with the Stormsiren, as she turns the Tide Pools into Hazardous terrain, gains some trigger-like effects to her attacks, gains a point of WP and AR, and gains an ability to summon more tide pools.
The Gibbering Hordes go into Glory by eating, specifically eating their own units. This strikes me as odd (I sort of wish they could do it by eating enemy units, too, but I have no idea how that would work for game balance.) There are ways around this, however, in the form of the Karkinoi units, who in addition to being the heavy hitters for the Hordes can spawn Egg Clutches which are, apparently, there to be eaten.

It’s mentioned that the Karkinoi also get stronger when they have reinforcement tokens attached to them. But what do those tokens do? Well, at the beginning of a turn, a fireteam can spend one of these to either replace any missing models from their unit or summon a killed fireteam back into play. So, this is going to make knocking an enemy’s army off the board a lot tougher, presumably (if you’re going to shoot at a unit with a reinforcement marker, you’d better kill them all or not bother, apparently.)
So, that’s what we know so far. They’re up to about $172k at this point, so more info will be coming. In the meantime, here are links to the Allegiances video and a playthrough to give you an idea of the rules.


And since this is a mini-post, I’ll toss in a mini-plug for Leodis games. The deals are still going strong, and they have models from Knight Miniatures and other minis games. You can get a Batman v. Superman set for the Batman Miniatures game. No word yet on whether your models just automatically quit fighting if you say the word “Martha” to them during the game. Follow this link so we can get the credit, and check them out.
Posted by AgentRock at 4:26 PM