Time to carry on with the reviews! If you missed the first half, here's a link! 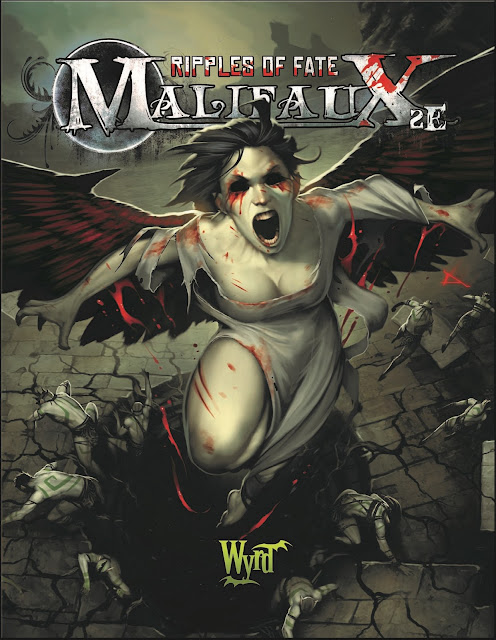 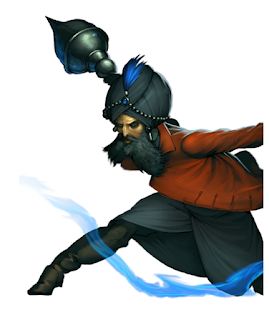 From the fluff, we learn that Sandeep was born in Guild occupied India and learned magic at a temple when he was adopted as an orphan. The knowledge he mastered was totally against Guild law, and as such his master was killed and Sandeep was set on his path. He has since become a teacher of rebel mages and spellcasters, with a mastery of Gamin and holding secret classes on Earth and now, after being invited there by Victor Ramos, in Malifaux. It could be my academic background, but I like the flavor of this dude.
He summons his big totem, Banasuva, to provide a threat on the board that could be interesting for Collect the Bounty. On the card (likely modified from upgrades,) he has a not so strong melee attack from his big Gada mace. His ranged caster spell has a respectable 2/4/5 damage flip with a ram trigger to give it plus flips for damage. He can teleport as a (0) or perform an interact action. As written, he feels like a kind of generic master, but that makes sense because any of his abilities that are casts (the ranged attack, teleport, and interact) are usable by the other academics in his crew. As such, you wouldn’t want them to be too overwhelming or that could get really out of hand. His melee attack is enhanced by which of his limited upgrades he chooses. He also picks up the ability to summon gamin from his limited upgrade, and gives different buffs to them based on which upgrade he chooses. The other upgrades aren’t detailed to any degree, other than to state that they let him hire academics regardless of faction and gives him the ability to enhance their abilities…in some way. Perhaps fittingly, Sandeep remains probably the most mysterious master at this point, but I’m very interested to see how he operates on the tabletop. 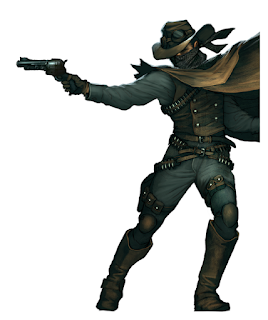 Parker was screwed over in court by a brother long ago, which took all of his money and left him to a life of banditry. He now runs a gang out of the Northern Hills and robs people. They aren’t loyal to anybody, so anybody is a target. And…that’s pretty much it for fluff.
Parker sort of strikes me as being reminiscent of the game Othello: you can learn him in minutes, but it will take you a lifetime to master. He shoots stuff, unsurprisingly, and has a trigger to make an enemy drop…one of their scheme markers? That will likely seem weird, until you get to the tactical action Five Finger Discount which lets him discard either his own soulstones or the enemy’s scheme markers to attach one of Parker’s upgrades to him. This makes sense when paired with his Empty The Chamber trigger on his shooting attack, which increases his damage from ditching upgrades, and the fact that he has 7 different upgrades which allow him to do different things on the board. So, Parker ditches an upgrade that may or may not have outlived its usefulness in the game (IE it’s a combat upgrade and the game has shifted to a strats/schemes/movements phase, or vice versa,) does some extra damage on an attack (3/4/6 for the cost of one upgrade,) and gains a soulstone back for Limited Supplies. He can then either ditch that soulstone or an enemy scheme marker and attach something better from his massive pool of personal upgrades. So, he could be a swiss army knife, with a different tool to fit whatever job you need. He also can toss out some pushes to his crew to help get slowpoke models into position for added utility. So, to all appearances, he is a scheme denial master (sort of,) who can switch between strategy or combat mode in mid game. My brother used to joke that, if I went to a fast food place, I would tend towards the “one of everything combo” because I like having options. Parker gets more tempting to me all the time. I do worry, however, that most Levi and Vik players may look at him, shrug, and move on past because they already have a very strong combat master and Parker doesn’t explicitly fill any of the things they’re missing. 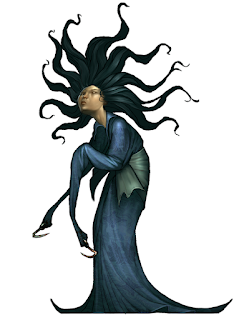 I wasn’t sure if Asami would have been an Oni from the start or a former human who had been changed into one. Her backstory reveals that she is the latter. Asami was locked up (seems to be a theme with the women of this book, I just realized) as a child because she could see the lights twinkling in the Beyond and longed to call them to be her family. She and Reva should sit down for coffee sometime. I think they’d have a lot in common. Anyway, her temple was raided and she was wounded and left unable to have children, ensuring she would never be able to create said family the old-fashioned way. As such, she accepted an Oni into her and gained the ability to call them, as well as a big shiny new smile (on the back of her head.) The Thunders have recruited her to take advantage of her talents but, who knows, maybe she isn’t so inclined to being under their control.
Let’s get the big thing out of the way, Asami’s a summoner. She calls any Oni type minions with a similar version of Nicodem’s summon, but with a twist. Rather than losing wounds when the new Oni enter the board, they have a condition called Flicker+1 that ticks down at the end of the turn and, if it is removed from the model, results in their being sacrificed. So, Asami’s summons have a timer essentially, which can be spiked up by sacrificing corpse and/or scrap markers when she calls them and (presumably) by her totem which has the ability to increase conditions. They still can’t interact when they appear and are slow, but they can tick her for 1 wound and then charge as a (1) so that mitigates a bit of the speed problem. She also has the ability to grant an Oni or minion Focus+2 for the cost of an AP (she is an Oni herself, don’t forget) and her melee attack is no slouch on its own. That said, she has only 10 wounds and only Hard to Kill to protect herself, so keeping her safe while taking advantage of that attack is going to be tricky. Her upgrade A Heavenly Design sounds, on the surface, to be a must-have due to granting her a placing effect for better positioning and by allowing her to drop a scheme marker next to any models which are sacrificed near her (granting them a kind of pseudo-Finish the Job trick similar to Molly’s.)
I think that, of the new masters, Asami has the potential to be the most difficult of the lot, but there’s a great deal of potential power here. Playing her as a dedicated summoner and ignoring her own offensive capabilities may end up being a trap, but summoning is one of the most powerful mechanics in Malifaux. Plus, you know, Amo No Zako charging for 1 AP is scary, ya’ll. 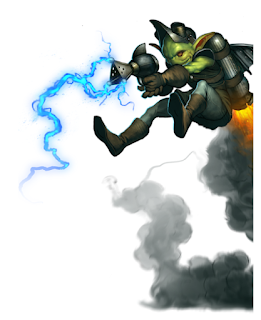 Zipp is pretty much what it says on the box, Captain of a crew of sky pirates. He and his band stole an experimental airship and have been raiding and pillaging ever since. His ship is called the Infamy. He has a jet pack and a lightning gun. I think that’s more or less covered it.
I like to think of him as having more in common with a certain other captain from Futurama whose name begins with Z. His strength is in A) Aggravating the people around him, B) talking a lot and C) Winning because the competent people around him go complete the mission for him. He’s insignificant, we already knew, and specializes in disruption. His two forms of attack are the lightning gun, which can drop the enemy’s walk down or push someone around on triggers. Or, he can lift you up in the air and drop you, leading to the very unique Melee versus Height duel with a pretty decent damage spread and the ability to reposition Zipp and the target 5”. This attack also has the greatest trigger name in Malifaux, “My work done, I race triumphantly into the clouds,” which lets you move Zipp away after doing the drop on the enemy. I think the most powerful thing he might be able to do is summon clouds of smoke to redefine the terrain on the battlefield and screen his troops. And, he has a semi-reliable ability to reposition his own people. I don’t think we can see the real full strength of his model at this time, since he gains power from upgrades which also allow his enforcers to attach Sky Pirate upgrades as well. These give you the ability to bring the Infamy into the fray by having his people drop pianos out of it on people on the other side of the board. It's tough to know for sure what Zipp is going to do, but I'm sure we'll see a ton of it just for the humor value (which could be said for most non-Wong Gremlins, but I'm editorializing again.) Good luck building those Iron Skeeters, though.

So, that’s the whole sorry lot of ‘em that’ll be available at the Con. Before the show starts, I’m hoping to put together a post with some pre-Gencon plans that I’m orchestrating, some information about the games of Through the Breach I’ll be running there, and a Malifaux Musings challenge which will gain you entry to a drawing for some Gencon lootz. So, tune back in for that later this week!

Posted by AgentRock at 4:24 PM