We’re in the middle of the first month of the ToMB project, and the posts have started to flow. I’ve sat down with the Hoff and detailed some of my thoughts on his crew previously, and this month I began testing out the box set + Peacekeeper list I’ve built thus far.

I’ve started painting, having worked through Hoff himself and the Peacekeeper. I wanted to do more than just have a typical metal-style paintjob on the constructs, so I’ve been trying to keep an eye out for various paint techniques to add some more color on. Additionally, one of the issues with Guild is how heterogeneous they are as a model line. Cowboys and robots don’t necessarily mix together all that well aesthetically (though it sounds like a cool idea for a graphic novel.) As such, I was looking to use that splash of color to improve the homogeneity of the crew. Since the guild’s primary color is red, I wanted to use this as the splash color and make an effort to add it in wherever possible on the models to tie everything together.

For the Hoff, this tie in was going to be with his vest. I was a little concerned initially that there was too much fuzz from priming under non-optimal conditions (I’ve since replaced that can of primer) and I’ve had troubles recently with my flesh tones not turning out the way I’ve liked. Also, I was planning on making his shirt white, which again has been an issue for me in the past. To address this, I decided to take the advice that most people tend to give me, thinning my paint out as much as I can. This ended up being kind of a mixed result, as the watery paint now started running everywhere and there were a couple of instances of me freaking out and blotting the ink up with my paper towel to keep it in the right areas. Thankfully, I eventually go the ratios right, and I’m very pleased with the outcome. 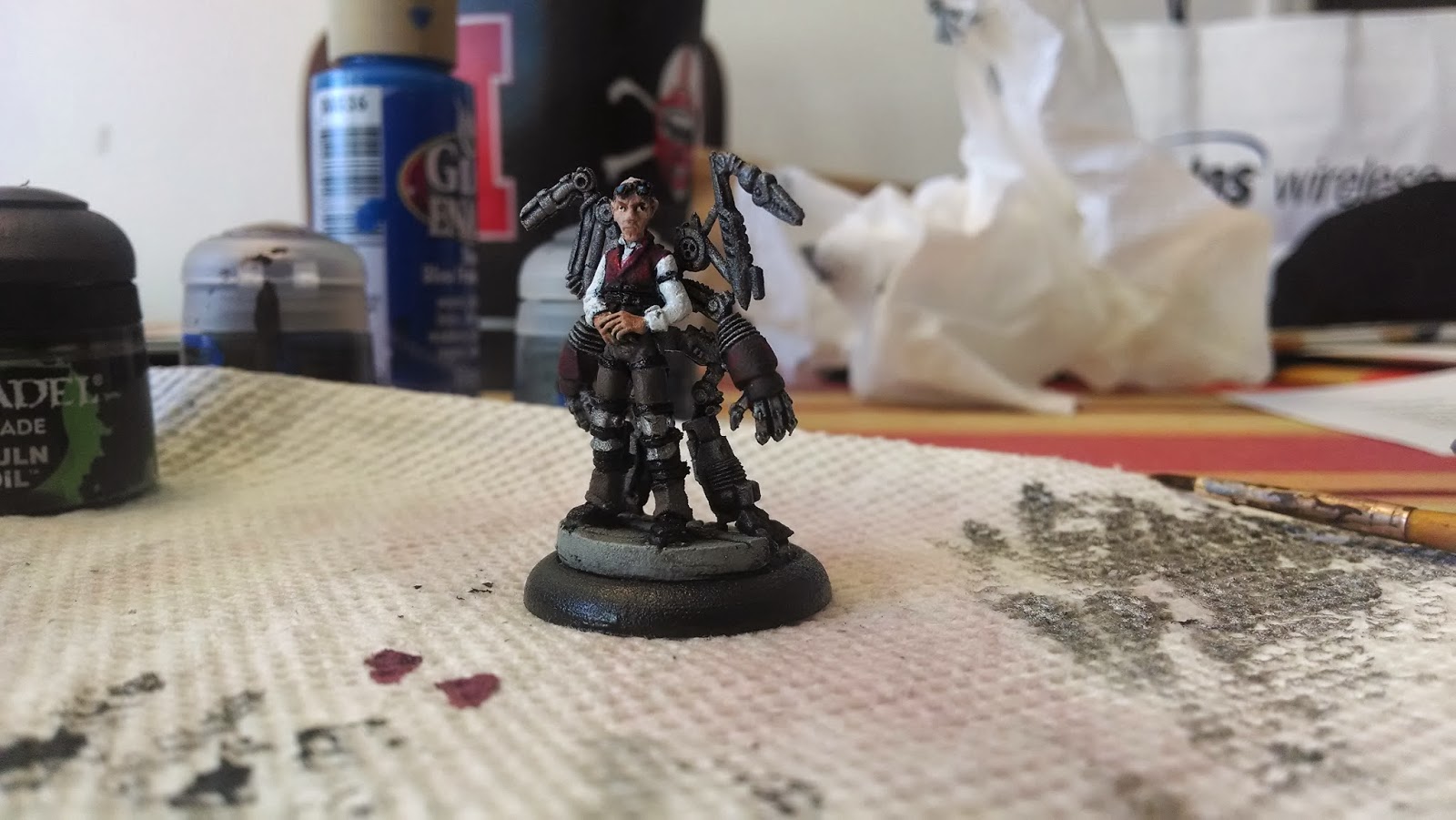 The metal is just the boltgun metal from GW with their Nuln Oil black ink wash applied liberally to age it and cut down on the sheen. I really love the current line of GW inks (heresy, I know.) The Flesh Wash, with more flesh tone painted over the top, turned out just the way I wanted. The Carroburg Crimson did a decent job with getting the vest halfway between being too bright and too dark. This is possibly the best model I’ve done up to this point, and I’m really happy with it. 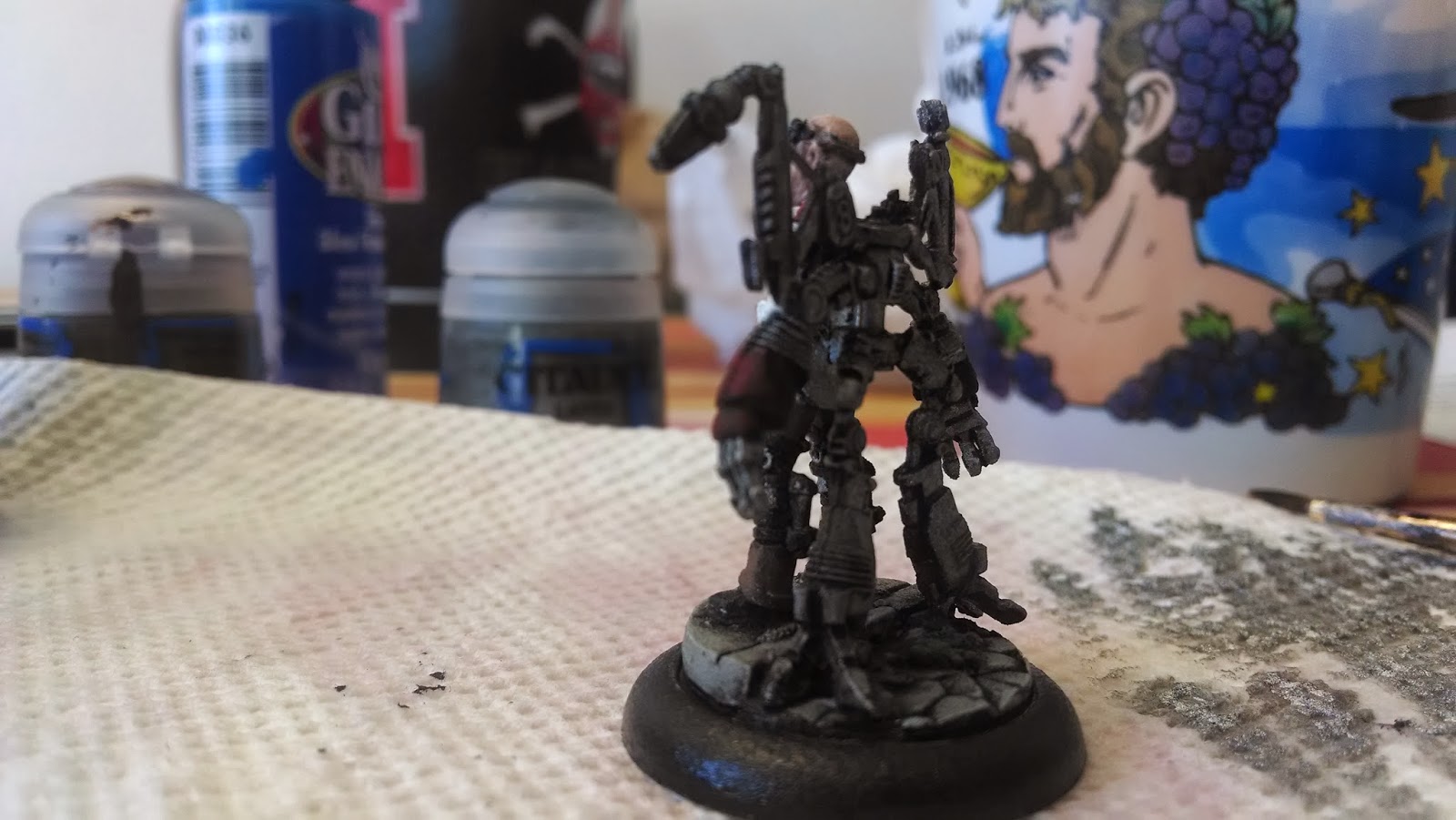 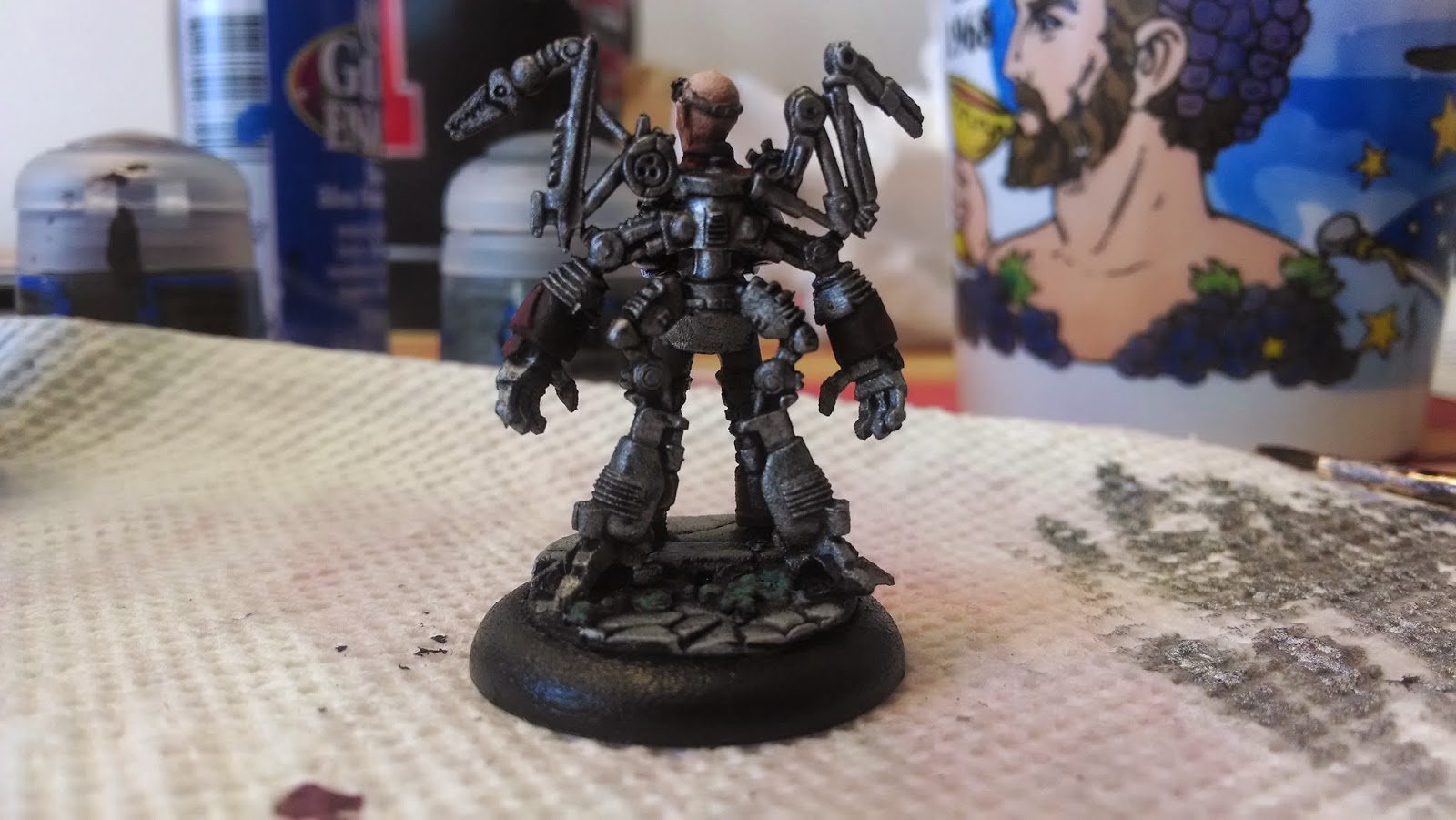 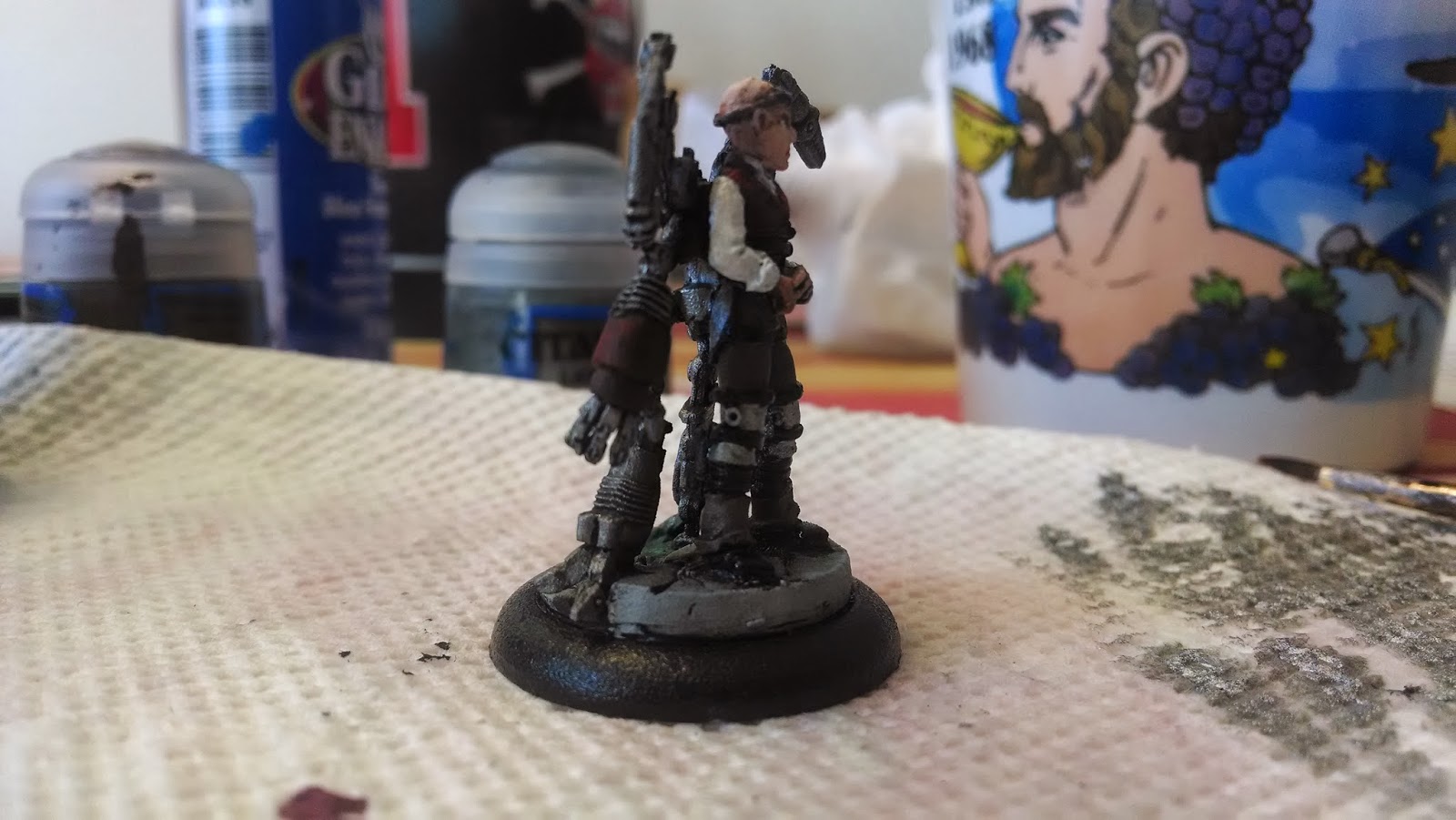 The Peacekeeper was next. As a general idea on the constructs’ paint schemes I was planning on sort of emulating a Warmachine Jack scheme, with the body and parts of the hands painted with the color and the limbs made from the metal. Again, the metal was the Boltgun with Nuln Oil liberally applied. This will be the general plan on the rest of the constructs as well. 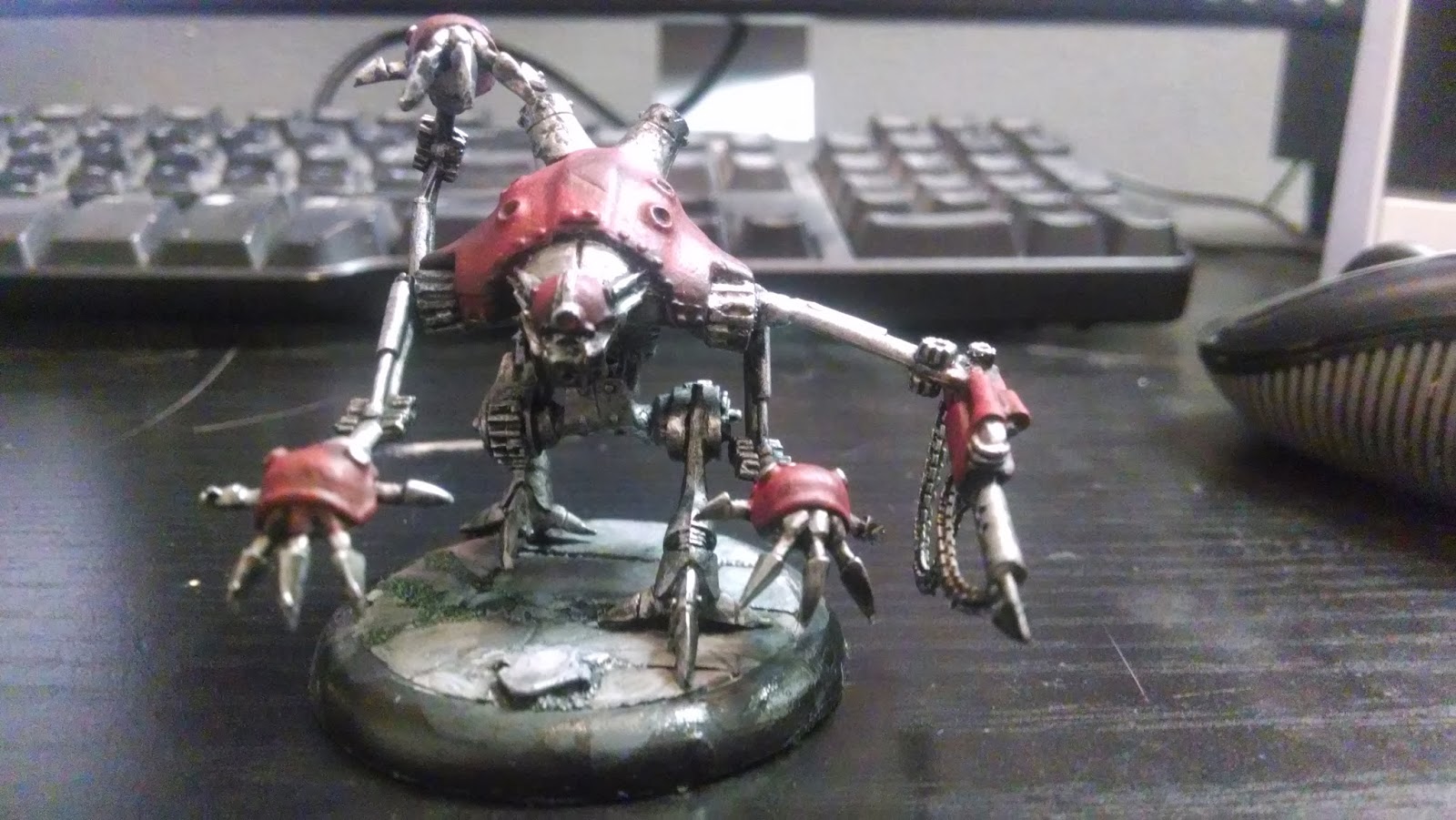 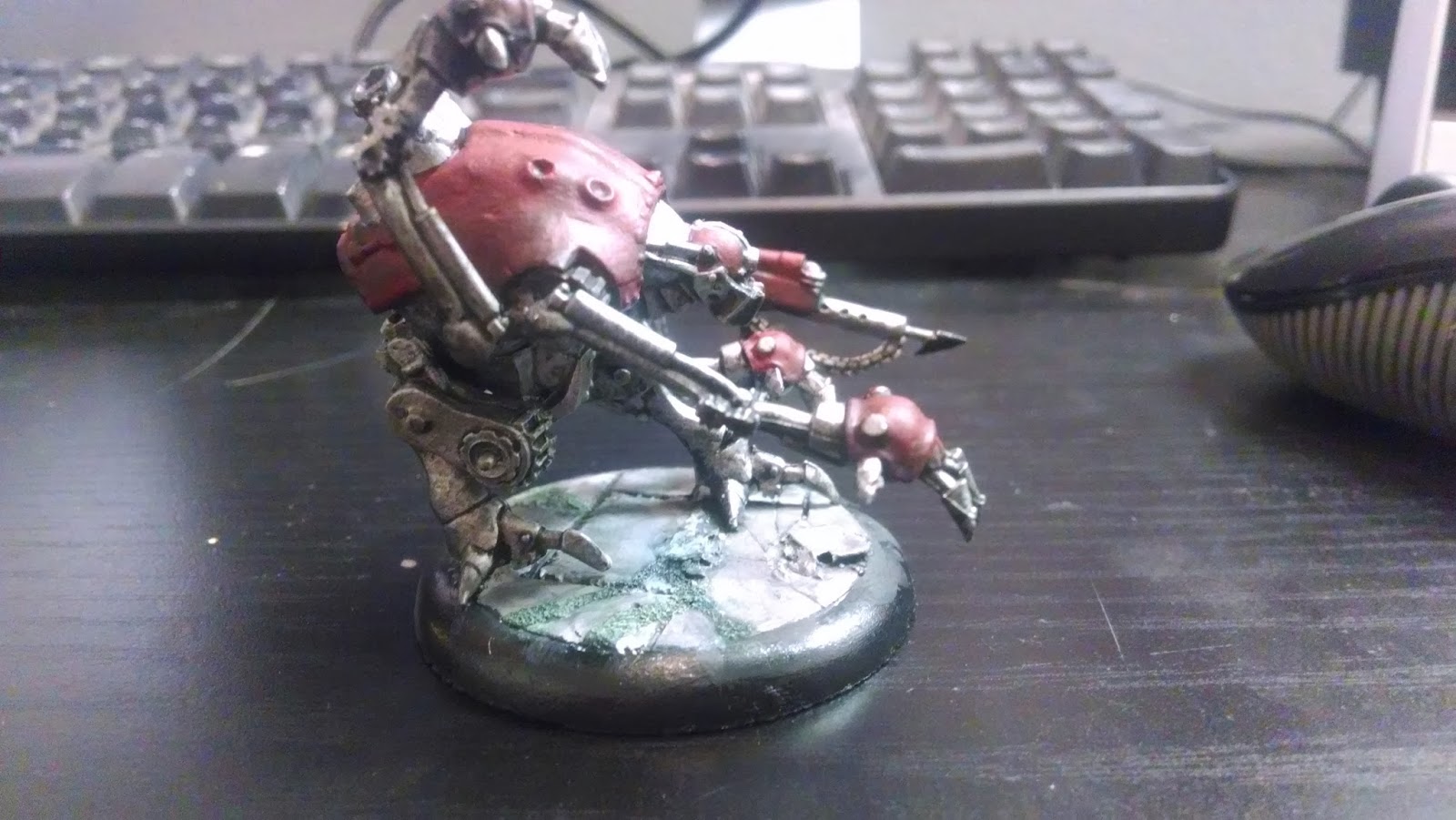 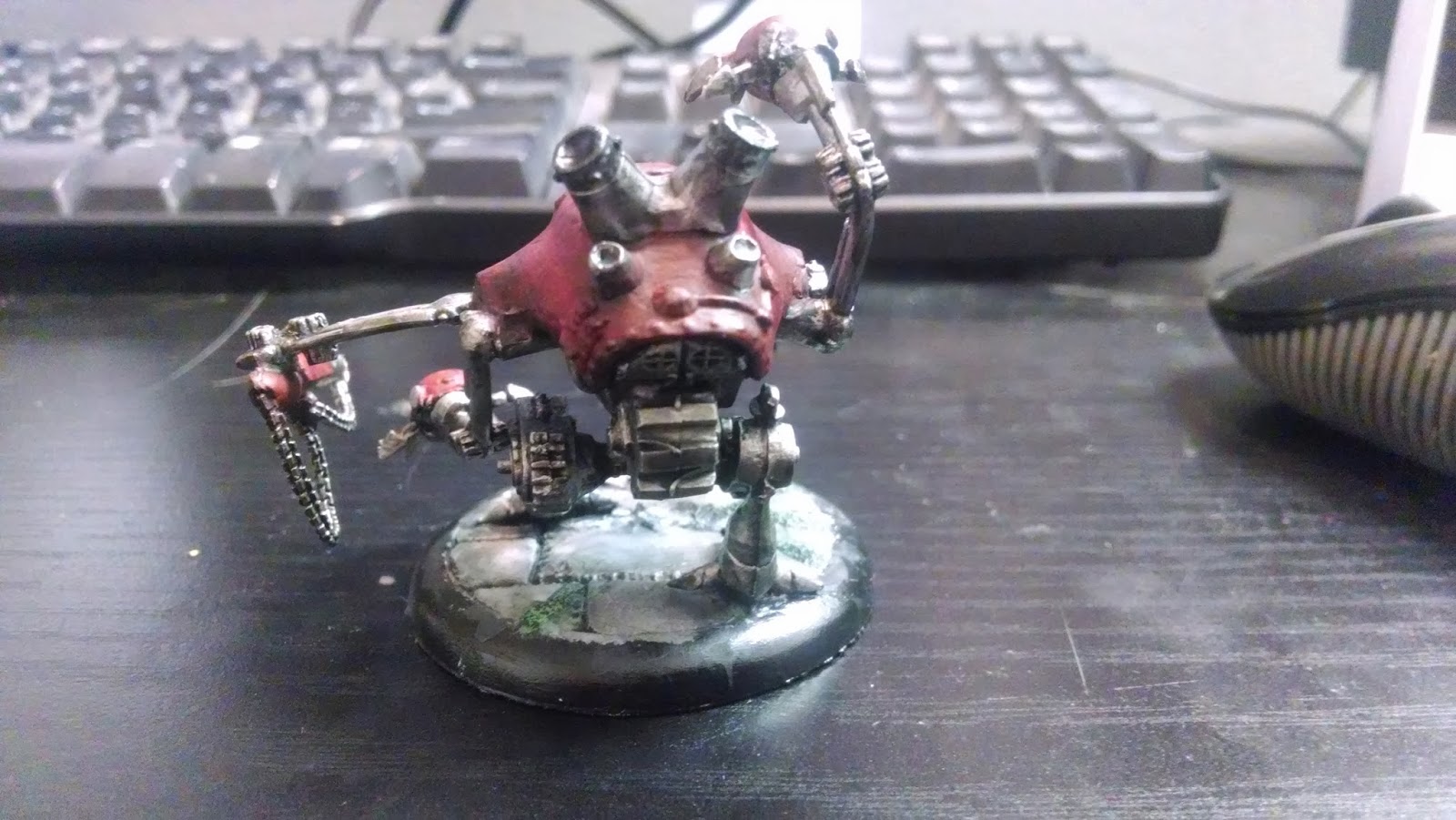 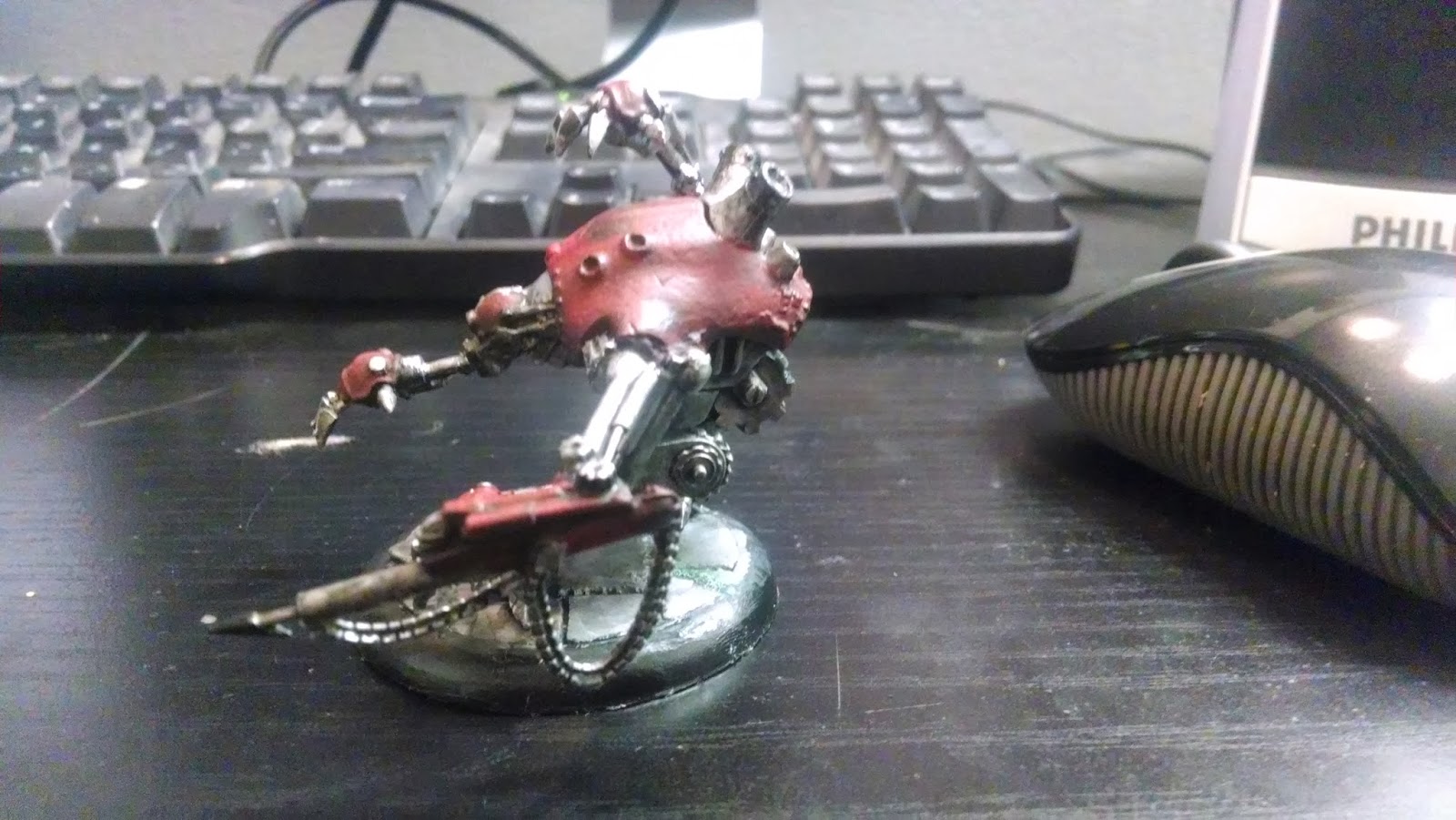 I’m fairly happy with how he came out. If I get ambitious, I may try to freehand a Guild ram symbol on its shoulder ala the artwork in the M2E rulebook and maybe some tick marks on the speargun, but otherwise I think he’s done. There’s still a lot of metal here for my taste, but that may just be the cost of doing business in a Hoff crew.

Now, I had planned to have a test game for this first post, but plans fell through and we weren’t able to get together. Not wanting to completely waste my time, I sat down on Vassal and pulled out the rules for playing a Solitaire game against the Iron Zombies that came with my University of Transmortis scenario pack. If you haven’t looked too closely at these, it essentially is a strategy version of the M1E Breakthrough scheme, with a card flip occurring after each activation of your models to determine what the Iron Zombies do. When you flip the corresponding suit to one of them they appear in base to base with one of your models if they aren’t deployed yet or, if they are, walk up to the nearest model and attack with the dissectors.

I knew it wasn’t going to be a particularly informative game from an interaction standpoint, and I’ve got slightly more points in this crew than what the scenario writers recommended, but all I was really looking for out of this game was a shakedown cruise for the crew to learn how they worked and start to spot the synergies and capabilities of the models. I started the crew off with the Peacekeeper, Hoff, and the Guardian together, the Hunter within Modification range, and the Watcher off in the distance from the rest. I interpreted the solitaire rules to be that I made a choice on where to deploy the Iron Zombies when they came out, so  the Watcher was essentially just going to fly across the board unmolested and score. I threw the extra armor mod onto the Peacekeeper and gave the Precision Targetting to the Hunter, with the theory that he could use the ram to pull the zombies out of a scrum and relocate them. The Guardian was going to be passing defensive to the Keeper and generally just taking hits for the Hoff.

Turn two saw us moved up slightly and clumped together, bogging down in the mid-board. To alleviate this, I planned to essentially use the Peacekeeper’s activation to clear out any nearby zombies, deploy any new Iron Zombies away from him, and then use Hoff to Machine Puppet the thing for walk actions to roll across the board as quickly as possible. In my plan, The Guardian was going to be sacrificing himself to let the others get away, hopefully lasting long enough so that the Iron Zombies wouldn’t be able to catch up to the Peacekeeper by the end of the turn. This is when revelation number one occurred during the game, as the Guardian didn’t just die heroically, he fended the enemy off and received very few wounds in return. The students have an ML of 6 on their Dissector attacks, but the Guardian has an equally stout DF6. Pair that with his Protect spell granting himself Defensive + 2 (I realized partway through the game he could give it to himself, rather than just the other nearby models as I had originally misinterpreted it) and he’s basically a shield wall that is not going away. And, if you do come at him with more than he can handle, he can use the Shield Bash trigger to toss enemy models 4” away from him and give them a condition that prevents them charging.

The Hunter had gotten tied up in this mess as well and wasn’t quite going to be able to get away clean even with its Prowl 3” push. This is when the second realization clicked for me, as I was looking around for movement tricks in the crew and realized, duh, that my models have chain spears and you can shoot your own models with them. With the prevalence of armor on the field you’re going to mostly be doing just one damage with this, and it lets you use a legit 8” push to drag your models together. This was a very pleasant realization, as I now was able to drag the Hunter in with the rest of the nucleus and, more importantly, this opened up a whole new avenue of tactical movement to the crew that I hadn’t considered.

So at the end of Turn 4 I was set up for 4 points scored, with the Guardian tanking the entire Iron Zombie crew on the other side of the board more-or-less effortlessly. I wanted to get another idea of the toughness of the crew, so I picked up the Valedictorian and put him in front of the Peacekeeper, Student of Steel in front of the Hunter, and Student of Viscera in front of Hoffman, essentially putting the worst-case scenario on the board and seeing how well they could hang on through it. The answer: pretty darn well. The Valedictorian didn’t live through 6 Peacekeeper attacks, The Hunter managed to withstand the double positive flip on damage from the Steel student, and Hoff managed to fend off the Viscera student with only a couple points of damage (stealing the armor 3 from the Peacekeeper helped.)

So to analyze the result: Hoff’s crew is a brick. If you go after the nucleus you had better have some kind of ace up your sleeve, because you’re more than likely not going to do that much damage and some serious pummeling is coming back your way. I didn’t have much need to use Hoffman’s other tactical actions outside of healing some damage the Peacekeeper accrued during the game, but Machine Puppet unsurprisingly seems to be the meat and potatoes of the crew’s operations. Also, the Iron Zombies scenario is close but not quite in place to actually be challenging. At the beginning, when we were getting locked in on my side of the board, I was getting a little nervous how I was going to get out of this mess. Ultimately, however, they couldn’t really do any significant damage to this crew. Perhaps this would be less the case if you were going to use them against a different crew with less armor or, perhaps, if I had randomized which models the Iron Zombies attacked when they appeared. I also think the instructions should allow the zombies to charge if they’re in range.
Posted by AgentRock at 2:59 PM