Given that we live in the future now, moving to a new area where no one seems to play Malifaux doesn't necessarily have to mean game over for me. I’m going to start demoing and trying to stir up interest, but I want to get in some 2nd Edition Malifaux action now. NOW DAMMIT! But what am I to do about this situation?

This is where we learn to play Malifaux using Vassal.

My friend Jon from back in the 402 and I hooked up through Skype and decided to learn how to make this crazy thing go. Now that I’m sitting here typing this, it occurs to me that I should probably have taken screen shots of the game as it went along, Whoops. Aaaanyway, I had installed it the day before and attempted to figure out how it worked (where are the tokens? Why are all of the windows stretched out to the least useful size possible when you turn first turn them on?) and then walked Jon through the installation process. The program is available from Wyrd at this page. You need to pull down the program itself as well as the Malifaux 1.31 module. For the record, this module is designed for Malifaux 1.5 Edition post-release of the Ten Thunders crews, but it still works fine for M2E other than the fact that some of the various models aren't sorted appropriately under the tokens tab (Lucius is a Henchman, The Judge is a minion, and so on.) It took about an hour to get through all the installation issues (he didn't have an up-to-date version of Java) but then we were up and running. One immediate benefit of playing through this medium was made apparent, as Jon elected to try out Rasputina for the first time despite the fact that none of the models he had purchased at Gencon were even assembled, let alone painted. Since I had just published my break-down of Jacob Lynch, I decided to put my money where my mouth was and take him out for a spin. So, without further ado, the battle report. 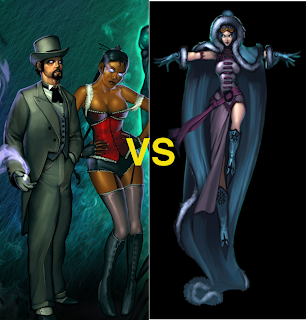 Schemes: Assassinate, Power Ritual
Reasoning: I wasn't over the moon about this pool of schemes, if I’m being honest. I've yet to pull off a successful Take Prisoner, and Breakthrough and Power Ritual felt like they were working counter to the strategy of holding the center of the board. Also, knowing my opponent was Raspy made it seem less likely I’d be able to get Assassinate given that she was unlikely to be anywhere near where the action was happening. I elected to take advantage of the Terror Tot-Sprint-Ace of Masks trick, with the thought that the Tots could sprint up, drop their markers, then sprint back to help hold the middle. Also, knowing my opponent was trying out a new crew, I was hoping Raspy would stick her nose out somewhere I could get her for Assassinate.

Rasputina (some upgrades, 6ss)
4 Ice Gamin
Wendigo
Ice Golem (Ice Armor upgrade? Gives everything with frozen heart the trigger where I only get one activation if I attack them.)

I won the deployment flip and elected to pick the bottom DZ for my team, setting up most of the crew in the building on the left and putting one tot and the Illuminated in the opposite (right) corner. Jon put one of his gamin in each corner and then had the rest form up behind the central building, with Rasputina on the top. I instantly regretted giving her that vantage point, but what are you going to do? There was no DZ that didn't have a building in it, and this one gave me the best cover for advancing.

Turn 1 saw my tots dropping scheme markers in their corners and then sprinting for the other side of the board. The gamin did likewise (albeit not as quickly.) The Ice Golem chucked some of the gamin forward to threaten the turf war marker and get some force projection going. Beckoners lure one of the gamin in so HD can start to hit it. Rasputina takes advantage of this by chaining ice off of him and blasting into HD and the Beckoners with her spells. Lynch sneaks out the side door of the building, circling around to flank.

Turn 2 saw the Rasputina player win initiative and blow up her own Gamin to blast into my crew some more (Red Joker damage flip.) One Beckoner died, feeding some health to the other. Hungering Darkness used stones/nexus to resist/ignore a lot of the damage. The tot on the right flank made it nearly to the enemy deployment zone but couldn't avoid a disengaging strike from the gamin standing there and was engaged. The other tot slipped along the outside and dropped the third power ritual marker.

From there things bog down a bit. Lynch engages on the left side with the Ice Golem, exchanging blows over the next couple of turns and then winning mostly because Lynch has soulstones. The Tot that dropped the scheme marker then charged into the leftmost ice gamin to keep him away from my scheme marker. We had an amusing exchange where we discovered that Ice Gamin and Terror Tots are like matter and anti-matter, as on subsequent turns they end up killing each other while finishing off their opponent with Black Blood/Shatter. The Turf War in the center bogs down with the Beckoner getting blown up by Rasputina, HD dragging the scoring Gamin and Wendigo in and eating them, and the Illuminated walking in to hunker down with defensive stance so HD and Illuminated score while the opponent cannot. Raspy had a tough time blasting through the Illuminated’s defensive posture, so I saw firsthand how potent it can be. Jon had basically given up on trying to kill HD, as Nexus+Incorporeal was making him pretty much unstoppable. End of the game saw Lynch running up to destroy one of the Gamin’s scheme markers, HD trying to climb the building to go fight Raspy to no avail, meaning no Assassination.

Jon and I didn't know Vassal very well, I kept having to get up to kid wrangle during the game, and Jon was playing a new crew, so the game taking 4 hours to finish was not a huge surprise. I’m sure when we play again it will go much quicker. Still, I see why so many people love Vassal, and I’m glad to be able to join in with it. If anybody feels like hitting me up for a game, contact me through the blog and we can figure out a time. As far as the game went, I’m reminded of why the Hungering Darkness is so sick with Nexus of Power, and why I've started hearing some muttering from Justin Gibbs in interviews that something may have to be done there. Jon could probably have made more use of paralysis in this game to give me troubles, and Power Ritual may not have been the right scheme. I suppose the Illuminated did what I asked him to in this game, mostly by not dying, but I still wasn't blown away by his performance. More testing required, I suppose.