Fear and Loathing with the Ortega Family

I spent most of last week struggling with Pandora, trying to get my head wrapped about what she is supposed to do in games now, with limited success. Wrabbit37 expressed some views on how this should work now, and I’ve adopted some of them, including the use of the Fears Given Form upgrade on both Pandora and Candy to essentially utilize their 3” melee bubbles to create zones of area denial around them, enabling some significant control and denial for your opponents. This happens at the expense of what the old crew did, which was pound WP attacks relentlessly to get the most out of Pandora’s Misery ability and the free wounds, which is a more-or-less inevitable adjustment for the current model as her 6 CA will struggle a bit going up against WP in a lot of cases. As such (and because I received my Evil Baby Orphanage Kickstarter reward models) I refocused the crew to test out some of this new stuff.
Given that the crew utilizes Self-Loathing and Fears Given Form upgrades extensively, it seems only logical for the crew name to continue to be…

FEAR AND LOATHING vs. The Ortegas

So I’m playing against Guild (again) who know that I’m playing Pandora (again) and I get a very strong suspicion early on that I’m going to be getting Perdita, her family, and her ancestral Aura thrown at me (again). And sure enough…

Ah well. I guess this is me paying penance for 1e Pandora…

Plans: Given my suspicions that it would be Ortegas coming for me, I knew they wouldn't have very many minions or peons, so “Make them Suffer” seemed like a logical choice. In retrospect, it's one that is probably best not to announce, as the opponent can hide their stuff from you (as happened in game) to deny you all 3 points. Basically, I was planning on taking one flank and castling up to make the opponent come dislodge me while I scored VPs every turn for Squatter’s Rights and Bodyguard. Of course, Perdita is playing Protect Territory, so she may just as likely castle up herself and we can sit on opposite ends of the board glaring at each other. I was gambling that wasn't going to happen, I suppose.

The Perdita player’s plan was fairly clever, in that she basically laid out a 4” equilateral triangle of scheme  markers in her half of the board for protect territory, which she could then score pretty easily assuming anyone was still alive. She misunderstood that you can’t call your leader for bodyguard, so on turn 3 she discovered that she was going to have to change plans, which ended up being a problem.

Turn 1 consisted of positioning and me remembering why we don’t put height 3 or taller terrain in deployment zones, as a vantage pointed Nino started off pecking at Teddy with a shot. 0-0

Turn 2 Santiago moved into melee with Teddy, both to get in close and to extend Nino’s disruption of Interact actions to lay over the top of both of my Squatter markers. Between Teddy and Kade we drop Santiago to his Hard to Kill. Francisco moves in with Face Me to push Santiago out to safety and take his place. Pandora tries to use the attack from the Box Opens, since it targets defense, to  minimal effect, before walking  so Candy won’t have to take the DF 14 duel from Fears given Form. Candy flips a squatter marker, moves, heals Teddy. ‘Dita drops some the three markers and flips a Squatter thing between her AP and the Nephilim (presumably he was interacing with Santiago or Francisco to do this. I don’t remember.) 0-0

Turn 3 ‘Dita Red Joker shoots the now exposed Pandora and then shoots her again. Pandora dies. Adam is sad. I console myself by killing Francisco and then flipping my second squatter marker. Santiago runs and flips another marker for the Ortegas. Teddy chases him, attempts to use Gobble You Up, and fails because it’s defended with WP and Santiago is an Ortega. Teddy walks into melee instead, accompanied by the sad Incredible Hulk hitch hiking music. Candy follows to console him (and get Santiago inside her engagement range.) End of turn I declare bodyguard on Candy. We discover that Perdita can’t be the target of bodyguard and, given that S. is going to die in a moment only Nino is a legal and/or wise target for it. As such, 2-1 is the score.

Turn 4 ‘Dita shoots some stuff. Kade offs Santiago. Teddy turns his attentions to Perdita and drops a Red Joker hug on her but doesn’t kill her. Nino tries to scramble down from terrain so he can get away from the deployment zone and score for Bodyguard. The Enslaved Neph runs away so I can’t kill it. Candy flips the enemy squatter marker to be friendly. 4-1

Turn 5 Dita relocates out of melee with Teddy. Shoots him some. Nino finishes him off. Baby team hunkers down. 6-1

Lessons Learned: This game had 3 different Red Joker damage flips, which makes judging things about what happened in the game tricky since there was a lot of flukiness. That said…frickin’ Pandora dies on turn 3?!?

Oh well, I had considered playing with Candy as a Henchman leading the crew, so I guess this was my chance. Teddy and Kade mauled the hell out of stuff in this game. I had underestimated the beating Kade can lay out when paired up with Teddy, especially if he hits that Sweetbreads trigger (4/5/8 damage spread? Good lord.) It’s always a little tricky to gauge what effect Candy has on the game, given that her most effective abilities rarely go off because the opponent will alter their activation order to avoid them (which is the idea behind the model) but she didn’t feel like she was all that involved in the game. The only casts she did all game were goody baskets to heal Teddy. Basically, her function in the crew outside of this was A) Don’t die and B) Flip Squatter markers. Admittedly, this won me the game, but it’s not as if no one else could have handled that job. I do think that the enemy crew being a ranged group probably played a part in this as well, as the enemy was much less likely to start in melee with me.

I have a hard time rationalizing why I would want Pandora over Lillith with the Fears Given Form and Thirsty Mandrake upgrades. You’re trading mobility, I suppose, but you have a much more balanced model who attacks at 7 and goes after defense, which is on average lower than WP. If you give her the transfixing gaze, you can pull enemies to you. Kade has Lure for some other tricky synergy. Basically you’re losing the ability to Incite into controlling models (which is huge, obviously) but that’s…kind of it, unless there’s something I’m missing here.

Aaaanyways, here’s some pictures of models I painted. 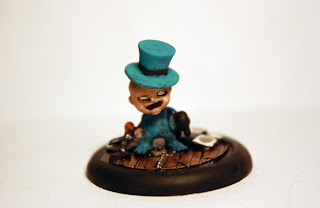 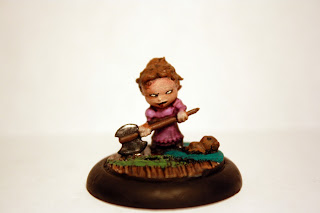 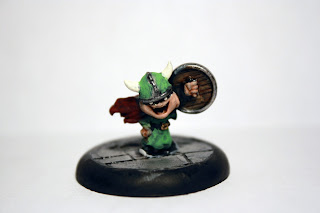 Teddy to come in the future.
Posted by AgentRock at 4:23 PM