Playing Through the Breach on Roll20

Welcome! We're wrapping up the fourth post this month for Through the Breach, the Malifaux roleplaying game. Previously, I reviewed Above the Law and Northern Sedition, two products that were released (or will be) recently. The third discussed adapting adventure modules from other games for use in TTB. This month, the topic is how to host what I feel is the best online version of TTB you can do.

I live a long way from the people with whom I play roleplaying games. This has been the case ever since I started playing Through the Breach. As such, it's been necessary to learn to play the game online, particularly given that my friends and I help with playtesting Through the Breach material. Our first efforts for this used the TTB module from Vassal. This method has some advantages, as it has Malifaux token sets already loaded into the mapping software and creates a subset of card decks for the individual players to use for their Twist decks. There are other parts of the module that don't work as well for what I want, however, so I've since moved on to finding other ways to play the game online. Ultimately, the best tool I've found for this is Roll20.

I know that they're currently on the internet outrage poop list, so maybe it's not cool of me to promote them, but A) I truly believe they've managed to assemble the best combination of complexity, flexibility, and usability of any online tabletop program and B) I don't care about internet outrage. For those who are unfamiliar, Roll20 serves as a virtual tabletop on which your players can conduct their RPG from anywhere with an internet connection. Signing up for an account is free, but there are monthly memberships you can sign up for to enhance your experience and add more tools to the toolbox. I would recommend having a Fatemaster sign up for a subscription and leave the players on free accounts, but I'm not you. If you want to support the company with your money, I support that choice.


Not surprisingly, Roll20 is built mostly for dice-based games and mostly-mostly for Dungeons and Dragons. However, their system is set up with decks of cards as well, presumably for games where they're used for initiative or other resources like Deadlands or Savage Worlds. This deck requires a little bit of work to convert the default deck to a Fate Deck (mostly, replacing the graphics of the standard cards with something to show the Malifaux suits and numbers.) You can use the normal playing cards if you want and you're able to do the suit conversion in your head (Rams are Hearts, because everyone loves the Guild. Crows are Spades because Rezzers need shovels. Tomes are Clubs because the Union is like a social club. And Masks are Diamonds because the Neverborn want you to quit stealing their soulstones.) but where's the fun in that? Of course, making all those cards is kinda time-consuming and not a lot of fun. Luckily, your local friendly neighborhood Malifaux bloggist has done all the work for you. Here's a dropbox with all the graphics files. You're very welcome. Now all you have to do is drag and drop them on the appropriate cards. You'll also want to flip the settings on the main deck to look like this: 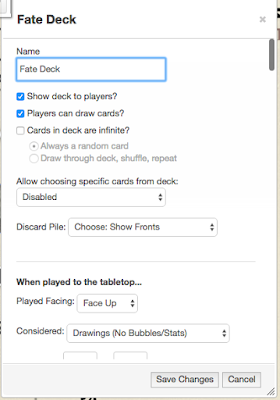 It's important to uncheck the "Cards in Deck are Infinite" box, because you need to know when the deck runs out, since that's when players draw new cards from their twist decks.

What's that? Twist decks you say? Oh yeah, I guess we should make those too.

This is easily done by creating new decks under the appropriate section of the toolbox, on top of the Gamemaster's toolbox area. You'll have to make a new card and then drag the appropriate card image into the spot, but otherwise it's pretty simple to do. This lets you build all 13 cards for the twist deck. For the twist decks, I usually activate the "Cards in Deck are Infinite" option, with the "Draw through deck, shuffle, repeat" box clicked. This'll save you a bit of work as Fatemaster (players can't reshuffle their own decks, unless there's a setting somewhere I haven't found to allow that.) I like to use my player's character portraits for the image on the back of their deck, but you could literally do anything as long as you don't use the same image as your Fate Deck. Then, you simply have to click "Show" to let the players see them, and they're ready to go.

For twist cards, players can draw them into their hands on their own or you can have the deck deal them out. Theoretically you can click on the fate deck and it'll flip over a card on top whenever you need to flip a card, but that is a little bit hinkey for + and - flips, as it does them one at a time and covers off anything previously flipped. Instead, I generally have everyone hover their mouse pointer over the top of the deck, which will cause an animation of a card to float up. You can then click and drag that card into play on the tabletop. This lets you track all of the cards from the current Challenge flips at once. It's helpful to make the Fate Deck cards and the Twist deck cards different sizes so you can tell them apart. Once the challenge is resolved, you can simply delete the cards to send them into their respective discard piles. Card flips are probably the funkiest part of playing TTB on Roll20, but ultimately it's not a big deal once you get used to it.

There are a number of resources online to help you run your games on Roll20, including their own wiki, so I won't go completely into all the details here. It's kind of useful to learn it organically anyways. But there are a number of useful tools. You can draw maps yourselves or upload graphical files for the maps as well as individual tokens to represent characters, opponents, or furnishings. These can be placed on a map layer that players can see but not manipulate, the objects and tokens layer where things can be clicked on and moved (you have to grant players permissions to move their own tokens, which is tough at the moment for reasons I'll get to later.) Additionally, there is a GM layer where you can place things that you can see but they can't. That's a useful trick to learn to manipulate. The purple glowing fellow in the middle of the map image above is on the GM layer, so I can see him but the players can't. That makes life a little easier and saves having to hunt through tokens to get them into play.

If you like atmosphere, there is a built in jukebox to play music and/or sound effects for the game. There's tables, handouts...basically there's a lot of good stuff in roll20. You can do a deepdive into it or just use it as a shared tabletop on which you can play your games. The level of commitment is up to you. We only just started using battle maps recently, for context, and really just because they were included in the Dragon Heist module I bought. Otherwise we're happy to play in theatre of the mind most of the time, but your group's mileage will vary.

The other big perk to playing on Roll20 is having all of your character sheets together in one place in the game. Or, at least it is for other games. Through the Breach doesn't have a character sheet yet on Roll20. As it stands now, to allow players to move their tokens around on a battle mat you'll have to make them a "character sheet" they can control and assign a token to it, which is silly since the sheet itself will just be blank (or, more likely, it'll default to a D&D sheet.)

But we're working on it. 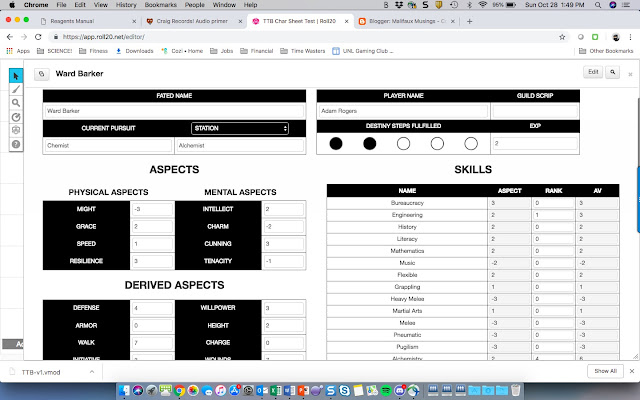 Doug Broman, a henchman from Des Moines who has html experience, is helping to encode a Through the Breach sheet in Roll20. So far, it looks pretty sharp. We're working out a few hiccups (figuring out how to allow people to add triggers ad hoc has been a bit of a stumbling block) and basically Doug's doing a lot of grunt work to get the coding set up, but I'm super excited for this. He's been a real hero, and if you see him and plan on using this at some point in the future, you should show him a little love yourself. When it's ready, we'll let you know and deploy it to the world at large so anyone who plays Through the Breach on Roll20 can use it.

So, that wraps up our October of Through the Breach posts. Or does it? Maybe there's a Halloween surprise in store? Keep an eye on your RSS feeds/twitter/facebook groups.