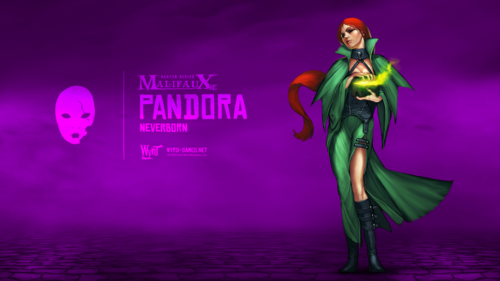 I'm stricken with a bit of writer's block recently for...reasons. IRL I'm in the midst of a job hunt and am that's taking up more and more of my attention (pending unemployment will have that effect.) Also, there's playtesting going on, which means much of my gaming time is being spent on things I can't discuss. So, this will be a bit more top of mind than usual. Apologies. 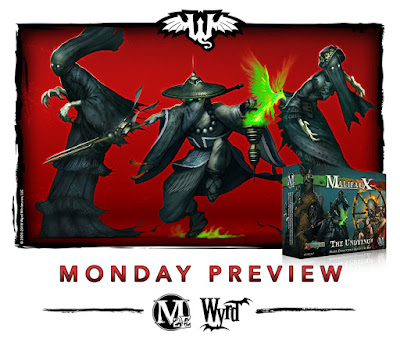 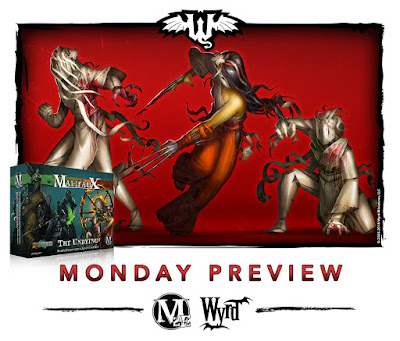 Just one mini-musing today, mostly introducing products coming soon. There are a couple of new encounter boxes on the horizon. One is The Undying, a box set revolving around a conflict between the Ten Thunders and the Resurrectionists. The story behind it is an order of warriors bent on hunting down wizards that feed on soul energy to stay alive like Yan Lo, led by Minako Rei (the masked lady in the picture above.) She's hunting down an eternal assassin named Manos who used to be one of their order, but who adopted the unnatural abilities to extend his own life and become Manos the Undying. He uses Chi to power his abilities, while Minako can put some sort of Kharma condition on models to have them take the damage she gets hit with. Along with them, they bring a set of minions. Manos uses a new type of Belle called Mourners who act defensively. Minako has Katashiro, some origami constructs that also count as Oni, and a Flaming Wheel of some kind. There also appears to be some kind of big resser...something in there. It looks cool. But, I must reiterate, if you are painting Manos, there is one acceptable paint job. One.

So I've been interested in summoning Pandora since I first saw it in book 4's playtest. That said, I didn't play it a ton, mostly because I haven't played a ton in general and when I have, it's been focused on things like Collodi recently. This complicates things even more, because there is a ton of overlap between what Collodi and Pandora do well: namely short to medium range murdering. It didn't make a ton of sense to do one while going with my goal of learning Collodi. But, I'm kind of over that now. It's not that I hate Collodi. He's fine. It just doesn't inspire me to play it the way other crews do.

Enter: podcasts. These are probably the biggest source of my Magpie syndrome. Recently, Max Value did an episode on summoning Dora and Alex Schmid did a Youtube video on the lady of sorrows as well. I've had a Pandora crew since 1st edition. I like the idea of her, and I like the idea of the summoning, so you'll probably see some more of her coming along shortly.

So let's take a look at this crew and what makes it different. First of all, don't go look at any of the stuff about other Summoners. Woe is Me does not make her work like them. She can only summon two models: Sorrows and the Poltergeist. That's it. And, little secret, from what I've heard you're doing way more of the latter than the former. That is, in part, because you don't have a ton of control over the former summons, as it requires you to cast off of an enemy model which has a condition, and the enemy model can then remove said condition. So, you don't have control over it, which means you can assume that your opponent will make the worst choice possible for you in any given situation (as they should be) and, even if you're summoning off of their Fast or Reactivate, they may just choose to drop it anyways to stop you. That said, there are two strategies that require conditions on the enemy crew's models to score VP, so they have to weigh losing points vs. letting you have more models, which is delicious.

Sorrows and Poltergeist have always been "good" models. The problem with them was that they were 1) Fragile and 2) Expensive. Summoning them gets around this problem. Now they're disposable, and if the opponent kills them they can just be brought back, which is great. The Poltergeist's - to WP flips is just debilitating. Sorrows can be really good, and you all know how much I like automatic damage.

One of my questions with this crew is how to focus the action. There's kind of two ways to go about it: take the battle to the enemy or bring the enemy to you. Basically, do I build the crew around advancing aggressively into the enemy, or do I use Lures and the like to bring the enemy in and kill them on my terms. Both have their pluses and minuses. Obviously, if you're drawing them to you and killing them, it's a lot safer. You don't overextend. You don't have to waste AP on your movement. You're separating pieces of the enemy's crew from each other so they can't support each other. Also, a lot of the stuff that works well with Pandora helps make this happen. Things with Lure like Lilitu, Beckoners, Baby Kade etc. all attack Willpower to do what they do (less so Kade, but he has other synergies.) However, if you're using a more passive/Lure based crew, you're also letting the other crew do what they want early on for the most part. You're reacting to their gameplan as opposed to enforcing yours on them. This can end up leaving you too passive and can cause you to fall behind and have to play catch-up to win games. Also, in a game situation where you CAN'T sit back and have to advance, you can end up with a crew that can't get the job done and is severely underpowered.

On the other hand, a more aggressive, attack based crew is going to avoid this problem. You're enforcing your will on the enemy and making them play around you rather than the other way around. This style of play works best in game scenarios where you have to move into the enemy half of the board and accomplish objectives (for instance, Symbols of Authority). Plus, Pandora's numerous auras and those of her summons, particularly the Poltergeist, are being used to their best effect when numerous enemy models are trapped within them. The risks, of course, are that you'll find yourself on the opposite end of the advantages to sitting back and pulling them into you. Worse, you're spending YOUR AP to get into contact with the enemy, so they don't even have to cast Lures or anything like that to get you into their trap. But, bottom line, sometimes the best defense is a good offense.

I don't entirely know the answer to this. I know this crew doesn't have the force projection to deal with an enemy that hides if they don't at least advance to some extent, but I may just have to build to the scenario and go from there. Still, I see a lot of potential here, and the successes I've heard the crew having of late in tournaments is encouraging.

One of the things I like about it is the flexibility of attack methods Pandora can bring in this build. The Max Value pod was very illustrative of this. Some games, Travis played her like the Pandora you know and loathe: moving up into range, smashing you with her attacks, and killing what she needed to kill to disrupt your crew, with Incite in place to help ensure activation order. In another game, however, he ran up against a Mei Feng crew that was using Vent Steam to block the attacks. In that game, he switched to more summoning and use of Incite as the primary offensive tool (cut to a shot of sad Iggy, whose Incite is a Ca instead of Wp, for whatever reason.)

One of the most important things to remember is that Pandora's brittle (like many of her Neverborn compatriots.) To mitigate some of this, I've converted to use of Aether Connection in more crews, particularly with her. I initially wasn't that impressed with just adding one more point of damage mitigation, but in truth that's huge. Pandora has 10 wounds. Mitigating an additional point of damage is saving 10% of her life. That's pretty awesome.

Perhaps because of that lack of wounds, I haven't used Martyr a ton when I've played her. That said, prior to book 5 most of my Pandora crews were the smashmouth version with Box Opens and Fears Given Form, usually supported with a couple other big beaters. As such, there weren't many Woes for her to use it with. I think figuring out when best to use it will be a key part of mastering this crew.

I think that's most of the thoughts I've had so far. Thanks for sticking with the random blur of nonsense. Usually I'm more focused than this, so if this is your first time at the blog, well, Welcome! and go check out the Nicodem wanted poster article to get a better idea of what I'm shooting for most of the time.

Also, if you're an old reader (or a new fan), please go support us on Patreon! All I want is a dollar a month from you. A dollar! You don't have a dollar? You're a liar! Gimme your dollar!
Posted by AgentRock at 11:25 AM