I know this is very late.  I can make excuses but the bottom line is I need to do a better job writing my experiences down in a timely manner.

So without further ado...

-Origins-
This is an annual game fair held in Columbus, Ohio in mid June.  As far as cost to attend, if you are there for all 5 days the full event badge is very economical at $55.  I had my brother buy this badge for me as a birthday gift and I happen to have friends that live in Columbus so this was somewhat easy to put together at the last moment.  I think the Malifaux event tickets were between 4 and 8 dollars so this trip was relatively inexpensive for me.  Where Adepticon is focus on miniature gaming, Origins is more in the vein of what GenCon is but on a much smaller scale.  It's on my calendar for next year but it's fighting for time off work.

The Malifaux events were well run by henchmen AJ Miller and Bill Tegeler and supported by Wyrd onsite.  I played in the Enforcer Brawl, Henchman Hardcore, and the 50 SS.  They also had a story encounter on Sunday but I was driving home.


-Origins Enforcer Brawl-
Before this event I have never played this format.  So for those of you who have yet to play this format I will post the rules and give you my general thought on the games.

Each player selects one Enforcer and attaches one Upgrade to it.  The upgrade must be something the Enforcer could have attached at the start of a normal game considering it faction(s)..  (Leader only Upgrades may not be selected, for example.)  The Enforcer must be one with a Cost which may be hired (no Coryphee Duets, for example.)
The game is played on a standard table.  Each player flips a card to determine deployment order; the player who flips highest deploys first, followed by the second highest , etc., until each player has deployed their Enforcer.  If to or more players are tied they flip off amongst themselves.  Models may be deployed anywhere on the table which is more than 6' from another model.
Play proceeds for 6 rounds.  Each round, all players flip for initiative: the player who flips highest must go first, followed by the second highest, etc., until all players have gone.  Flip off amongst those who tie.  If a model receives reactivate, it receives a second activation at initiative -1.  (if multiple models Reactivate, they flip to determine who goes first).
Before the game assign a suit to each table edge.  On the player's initiative, if they have no models in play or buried, they must flip a card which may not be cheated (reflipping jokers).  The player places a new copy of the model they chose at the start of the Brawl (including it's upgrade) within 6" of the board edge corresponding to the suit flipped and then proceeds with their activation as normal.

At the end of 6 turns the player with the highest Victory Points wins.  Players score VP in the following manner.


So with these rules in mind I started round 1 with the Lone Swordsman w/ Recalled Training.  I know there was another swordsman w/ RT, A lone Marshal, and I think a Rail Golem.  Since I was tied for cost with 2 other models I played cat and mouse instead of Leroy Jenkins.  Example was I had the other swordsman engage me after I had gone that turn and he reactivated off me after I reactivated off something I had killed.  I did have RT running but I was probably out of cards so I couldn't guarantee killing him so I pushed out of engagement and double walked making it impossible to hit me.  I finished that game with 10VP and the next highest was at 2.

Everybody changed models for each game.  I ran Yin w/ Smoke Grenades and Bishop w/ Oath Keeper. I finished middle of the pack the next two games but no one made up the difference from game one so I took first place.

My approach to this format was almost an equal mix of what points can I deny as well as what I could score with the focus on denial.  If I didn't have the cards in hand to ensure I would kill something I would go for first blood.  I'm thinking I might give the hooded rider a go since I play this format to meet people and have fun.  It's not something I will spend a lot of time plotting and scheming because there way too many variable you will never control.  I could show up and everyone at the table decides my model needs to die.  A far fetched scenario but what actually happens could fall somewhere on this spectrum.


Next I played in the Henchman Hardcore.  I didn't bring the key model because it was on my paint table and I forgot to pack it.  I'm fairly certain the official rules can be found on Wyrds resource page so I won't rehash that.  The list...

The idea was to discourage charges with brace yari.  Yamaziko has a cache 6 so stoning to misdirect onto the Kominu/Rail Worker or damage prevention depending on the average incoming damage.  Im torn between the Tengu and Low River Monk because regeneration on the Swordsman ticks twice if he has a chance to reactivate but in practice order of operation tends to require the swordsman to go before I can get regeneration up so then healing is more efficient.  And having condition removal is not a bad thing either.  I think there is something here in this list and with a little practice I should win some games.

The Quick and dirty results for Avatars of Origins 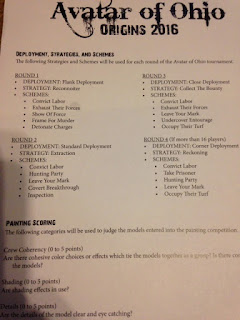 I can post a skeleton battle report on any or all of these upon request.

Round :1
I played vs. Resser Tara.  I won 7-4.  I scored 3 for detonate with Yu and wandering river style. Got 2 for convict labor (because we didn't get to turn 4) and 2 for the Strat.  I denied him the strat once and he got 3 for Frame for murder (typically i will cede these 3 points, hope for 2, and not alter my game plan)  I don't think he ever told me what his other scheme was.

Round 2
I played vs. Neverborn Lilith.  I won 8-3.  I got 3 for the strat (got to turn 4) 3 for Breakthrough and 2 for Leave your Mark.  He scored 2 for the start and once for Hunting Party.(I took an anti Hunting Party list to discourage him selecting it but he felt he could get to my trap I hid with Lilith in time).

Round 3
I played outcast Von Schill.  I lost 6-7.  I tried my hand at Occupy Their Turf and it turns out if you divert resources, you are not as efficient at the start.  I score 3 for entourage and 3 for occupy.  The first time I failed to score at all on collect the bounty (i did destroy another strongarm suit with Huggy turn 1.  He really hates those things).  He got entourage with Von Schill and 4 for the strat.

All in all I enjoyed playing my opponents and would gladly play any of them again.