Misaki vs. Lillith 25SS: A funny thing happened on the way to the supply wagon depot...

Yesterday marked the first round of our campaign conducted through the local game store. Misaki and crew made their way to the game store and lined up to play against Lilith and her crew of vampire-demon Nephilim things. The organizer of the campaign wanted us to include special terrain with the games, so after flipping that I would be playing supply wagon again (opponent had Escape and Survive) we flipped and saw that we were also going to be fighting over some mysterious effigies in this game. So, between the relic counters for campaigns, the effigies, and my supply wagon, there were a number of featureless black disks sitting all over the damned board, which looked somewhat like this. 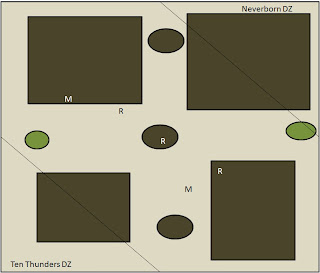 With diagonal deployment and the rules for the various markers’ placements, things ended up pretty equivalent between us on the board. I set up at the bottom right of my triangle, flanking the wagon with Misaki and Yamaziko and placing the Archer on the roof of the building in my DZ to give it good firing lines on the middle of the board. The Nephilim squad hides back behind their building in their DZ. Tuco, then, deploys from the shadows behind the building to my bottom right. We flipped for initiative, and the game began.

My opponent won initiative and basically split her crew in half, with some going clockwise around her building and Lilith and one tot going the other way with the Primordial Magic. Tuco ended up moving towards my crew pretty early in the turn and breaking the “no attack” effect from deploying from the shadows, which suggested to me that the opponent was not extraordinarily familiar with the speed of a Misaki crew, a lesson that was learned when the Mistress of the Ten Thunders moved into him and dispatched him pretty handily with an assist from Yamaziko. The tots did a lot of sprinting up towards me. I used the Torekage to throw some smoke up and get in position for a second turn flip with Misaki. The archer and Shang poised themselves up on the roof for next turn shooting.

Second turn saw the young Nephilim barrel towards my Torekage, coming up just short of charge range. This was a shame, as the Torekage then flipped with Misaki (who has a 2” melee) and killed him. She was then swamped by tots who, while not really able to do much damage to her, were going to lock me in place for the thing I was afraid of from the minute I drew this opponent, a beating from Lilith. Both from reputation and my own experience, I know that Misaki won’t survive a protracted melee combat against multiple opponents, particularly when is arguably even more smashy than she is. I moved Yamaziko up to try and lend some back-up (though she failed to do anything significant this turn.) One of the tots, knowing the potential damage output of the Ten Thunders Archer,  sprinted towards him but didn’t get the mask it needed to run all the way into melee. He was then rewarded with an arrow to the face. Shang flew to the top-left corner from me to go sit on the relic marker and maybe snipe the primodial magic. And it’s at this point that Lilith did something unexpected, pushing some of us out of place with earthquake and hanging back from melee. I didn’t really understand why until the closing phase when, since I forgot to put someone in place to defend it, when the supply wagon went merrily chugging forward to the middle of the board with no protectors.

She won initiative and walked up to go smash my wagon to flinders (I love that word, even if it did mean I just lost 4 vps.) She only had one AP left, and was worried about getting pecked by the archer, so she cast transposition to flop him and Misaki, leaving the archer in melee range of two tots. I’m not sure how I feel about this move, as she couldn’t have done anything particularly offensive at this point, and it did move the archer out of the way of shooting twice at Lilith, but my Torekage was right there to bail him out and it freed Misaki up for a diving charge on the Mother of Monsters. The Torekage was, admittedly, the Kill Protégé target for my opponent, so it did put him in range to take a shot at finishing him off, but still it was a mixed bag of effects. The tots didn’t manage to hurt the Torekage to any great length (I was relatively impressed with his resilience, to be honest. Maybe I shouldn’t be surprised, given that he is a ninja and all.) Shang went up for some totem-on-totem violence and scratched the eyes out of the P.M. And then, the big moment…diving charge from Misaki on Lilith. First attack…misses and leaves me with -2 CB. Second attack…misses. This looks very bad. Final attack I only manage to stone my way to a tie. I flip my three cards for attack…and the second card in is the red joker. Red Joker + Severe damage flip leads to 12 damage for Lilith, and that is one dead vampire lady.

Next turn Yamaziko uses sweep off of her Yari to drop both terror tots, and my opponent was tabled. We called it and let me spread my people out to claim as many markers as I could, and I won 6-0 after getting both my schemes and claiming the mysterious effigies. Cuz, you know, who needs strategy points, anyways?

I always feel a little off playing games against opponents who clearly don’t have the same level of experience as I do, particularly when things are going my way on flips. I don’t enjoy just stomping an opponent into the ground, and I tried to help her out whenever I could without compromising my game for the campaign’s purposes. I’ve also resolved not to injure models with no upgrades in the campaign, as my first experience in the practice game could have left me with a very gimped crew going forward.

The league member who red jokered the “injury” for one of his Death Marshals, on the other hand, may be a different story…

I did, however, screw up completely with protecting the supply wagon. What a dope. I honestly told her, after the game, that if the Red Joker + Severe hadn’t come out on that Lilith attack, there’s a better than even chance that she could have taken that game. 8 defense blooooows. Now I know how people felt trying to attack my Perdita back in the day. And, worse, Lilith drops your CB after the first miss with her vanish ability, leaving me swinging at 5CB against 8 defense with another soulstone user. After the first two attacks missed, I was almost expecting to lose Misaki at that point. I was very much baled out.

My upgrades after the game had the highest barter card come back at a 9. As I only got to 5 guild scrip (stupid supply wagon…mumble mumble…) I can’t buy a ronin to up my model count, so I used the 9 to buy ranged expert for my archer. Should make him even more capable of shooting things very dead.
Posted by AgentRock at 4:08 PM