How to Play: Lucas Mccabe Relic Hunter by guest bloggist....Me!

Hobby Update: I’ve been working to expand my pool of 10T models, so I’ve been building a lot of stuff recently. Namely, I put together the Born Every Minute boxed set, some Charm Warders, and some odd Yan Lo bits and bobs. I’m pleased to announce that I have joined the Yan Lo’s beard club, having put it in place without issue. Of course, I then lost the bow off of the back of Chiaki’s head, so maybe I shouldn’t brag too much…

Additionally, I’ve basecoated some monks for the Shenlong crew, and got the master up to tabletop level (aka, about as good as I can do.) I discovered my one Wandering River Monk is not attached to his leg, and the base is missing also, so that sucks balls. For the time being, they’re probably an anti-Outcasts pick more than anything else.

Malifaux in the Media: If you have Spotify, there is an amazing playlist called “Southern Gothic” you can find by following the link. If you’re looking to get a mix of that deep-south, spooky, romantic music to put you in the headspace of the Bayou or the Badlands, there’s a lot of good stuff to be found there. Check it out! 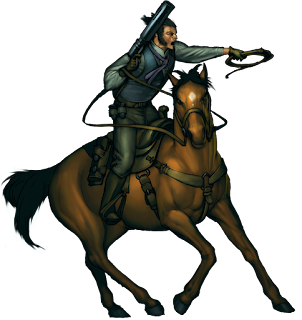 I've really liked McCabe since the testing of M3E, and he's actually a big part of what flipped me to 10T at the end of 2nd Edition as well. He's just always been such a flexible, fast master who can switch from point-guard to shooter in a blink. On the other hand, he's not in the Guild anymore and some of his mechanics are very different, so how's he doing in 3rd? Well, if you listen to Malifaux podcasts of any variety, you probably know the answer is "very well." But let's dig in a bit deeper, and take a closer look at how to play

McCabe and the Wastrels are a very mobile crew who excel in objective based missions like Plant Explosives or Cursed Idols. McCabe himself dishes out a frankly ridiculous number of passive TN duels to avoid damage as he tramples his way through melee combat, due to his Make Way ability and the built in Rear Up trigger on his melee attack. As such, his relatively low damage track on melee attacks can be a bit misleading, as any attack has the potential to do 4 extra damage from the two duels the opponent faces. Perhaps more importantly, this can serve as hand pressure to force cards into play. Keeping him at range isn’t much better, as his net gun has the ability to spread Slow and Staggered with blasts. A very viable opening gambit in games, depending on how the opponent sets up, is to blast McCabe forward and throw a wrench in the gears of the opponent’s crew before they have a chance to get rolling. Part of what helps with that is the free “Ride With Me” action that allows him to push 5” and bring a model of sz 2 or less along with him.
The gimmick of the Wastrel keyword (well, other than getting focus when everybody but McCabe takes a walk and drawing a card if they start their activation next to a corpse or scrap marker) are the artifacts. There are 3 of them: the sword, the mirror, and the mask. You get one when McCabe or Luna performs a specific looting action that discards a corpse or scrap marker. Once you have them, they add bonuses to the model who is carrying them and gives them a Free action to toss it to another Minion or Wastrel (McCabe can do it with a built in trigger on the action.) The blade lets you ignore defense tech, per usual. The others provide a pair of utility abilities to leech health out of nearby models or draw some extra cards, but the most important part of the Artifact upgrades is the fact that they give a model Fast when they attach. As such, a standard set-up involves the crew standing in a cluster near a scrap marker provided by Luna’s action to generate one and/or the trigger on the Hucksters’ false claims. You get to draw cards from the scrap marker, then Luna turns the scrap into an Artifact and tosses it to one of the other Wastrels (or minions) to give them fast. Then, when they activate, they pass it along to another one, and then another, and so on and so forth. Ideally, you would be able to hand out fast to the whole crew in this way, but more likely you’ll have to peel off and start moving to counter the opponent before you get it done (for instance, sending McCabe off to go shoot nets.) Either way, the keyword has tons of early speed, mobility, and a dash of card draw.

Trinkets (or Artifacts, as they're now known) are much less of a “focus” of the Wastrel crew than M2E. They’re good, and the Fast they give out is very clutch, but honestly you’ll probably be doing most of the artifact stuff turn 1 and only infrequently after that, as opposed to the standard Black Flash-Sword shenanigans of the prior edition. Additionally, he’s not in the Guild anymore, and a lot of what will eventually be a part of his hiring pool is going to be in the forthcoming Explorer’s faction. As such, McCabe leans a lot on versatile models. Thankfully, Ten Thunders have a lot of good options.

The rest of the keyword varies from model to model. The new boxed set, One Born Every Minute, has the most bang per buck of the crew in general. The new Henchman Desper Laraux and the new minions, Hucksters, are insanely mobile. Additionally, the Hucksters have the “False Claim” action, allowing them to drop a pair of scheme markers (or a scheme marker and a scrap marker) for 1 AP, making them one of the most viable ways to complete schemes like Harness Ley Lines or Search the Ruins that require dumping lots of markers in one place. Between those models and McCabe’s personal mobility, scheme running is a snap for the Wastrels. The Ruffians are…forgettable, but as cheap models go they have some interesting mobility tricks themselves with Chain Gang, and if nothing else they can throw down scheme markers to be removed for False Claim.

McCabe can do a surprising amount of damage with his ride through shenanigans, but he struggles against Armor and is much better at spreading damage around than he is taking on individual hard targets. Sidir Alchibal is a reasonably good beater with Ruthless and a good ranged attack, and his Blow it to Hell can clear Ice Pillars or Titania’s terrain markers, but for the most part they’re going to rely on Versatile models for killing.

The main defensive strength of Hucksters and Desper are simply not being anywhere the enemy can get at them. McCabe is a big sack of wounds to cut through, though he’s vulnerable to enemy models that negate his demise ability. If you’re really worried about beefing McCabe up, you can give him the Phantasmal Mask for a little healing or buy Silent Protector, which effectively gives McCabe 3 Hard to Kill thresholds (1 before the horse dies, one when the horse dies, then one for Dismounted McCabe.

I struggle to think of crews that do this better. Harness Ley Lines is avoided by many top players due to the AP costs/difficulty in spreading the markers around. With a little help, a Huckster can do this on its own in one activation. I’ve wanted to play Seamus ever since he gained Back Alley/Secret Passages, and having scheme runners who can do that for you is just as tasty. Desper is even more mobility, and McCabe can be wherever you need him to be. So, so good.

There’s only really two forms of this in keyword: standing next to corpse/scrap and the Faded Mirror’s drawing one card per turn. The former takes some set up and is only really reliable turn 1. The latter requires you to have fewer cards than the opponent and, let’s face it, it’s just one card.

It’s gotta be Hucksters. They’re game changers. They’re one of the models I think are worth the +1 out of keyword cost. They’re game changers.
Ruffians, on the other hand, are not good. Chain Gang has some potential as a mobility action, but the crew already has better versions of that. Otherwise they’re squishy, don’t hit that hard, and don’t offer anything interesting for schemes or killing. Being Ruthless might make them situationally interesting, but overall I’m not going to be using them much (and that’s unfortunate, as I like their sculpts a lot.

Anything that is a Minion has potential to be boosted by working with McCabe. The Dawn Serpent is a popular expensive minion beater that can get scary with some artifacts to boost him up. I have a favorite build where I pair Sidir with a Samurai to create a nasty firebase (it’s expensive and maybe not that optimal, but it pleases me and the Samurai can get Focused as a Free Action to benefit from Know the Warrior.) One popular crew I’ve seen mentioned a couple of times is the 2 Dragon list where you bring the Shadow Emissary and the Dawn Serpent, as the Emissary is just a very good all-around model and can compensate for some of the crew’s card deficiencies with its Free Action. Additionally, I haven’t had a chance to try her out personally, but I love the idea of including the Versatile Minako Rei and using the crew’s ability to generate scrap to summon Katashiro for some more disposable scheme running/booting Corrupted Idols upfield.