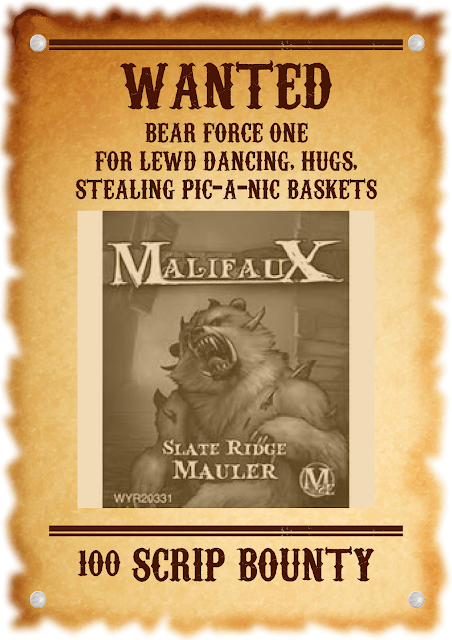 Citizens of Malifaux, we at Malifaux Musings come before you today to inform you of the greatest threat our fair city has ever faced. This enemy has come down from the northern hills, leaving panic and chaos in its wake. This furred foe represents an unprecedented level of danger, violently smashing through all who oppose it while simultaneously distracting them with obscene, strangely alluring dancing. No pic-a-nic basket is safe until this crisis passes. We urge, we IMPLORE, all who read this to stay in your homes. Lock your doors. And, for the love of god, don’t let them give you a hug!

We are speaking, of course, of Bear Force One.

***
First presented in A Wyrd Place over a month ago by Max Value host Travis Weyforth, Bear Force One is a crew list featuring the Slate Ridge Mauler with their 0 stone upgrade, Circus Bear. It’s half a real, powerful crew list, and half meme. It was further discussed by Alex Schmid on his youtube channel, who went on to run it through an acid test in a tournament which he won, demonstrating the viability of the list as a concept. I actually assumed this was just a joke when it first came out, but I assure you the threat is real. Let’s take a look at it, because it very well could be something you could run into during a tournament game and, if you don’t know what you’re seeing or how to approach it, you could very well get wrecked.

When I say that this list features the Slate Ridge Mauler, I mean that you’re going to spend something like 80% of the points in your crew on them. This is a spam list. The recent soulstone reduction the bears received in the January errata made this possible, as you can now cram 6 of these brutes into your crew. They must be world-beaters, right? Well, don’t get too excited. Their crushing claws are a Melee 5 (6 with the upgrade) attack that deal 2/3/5 damage. They have a (0) action to give them a little extra speed, but their walk is nothing to write home about so they aren’t going to set any speed records. The reason you’re using them is for their (0) action, Bear Hug. It’s a Rg 4 attack action that gives out the Slow condition and, with a trigger, pushes the bear’s target into base-to-base contact with them.

It’s easy to see the appeal of spamming slow, especially if you’re familiar with a similar Weyforth creation, the Voidspam list which featured a half-dozen void Wretches for a similar purpose. The advantage these bears have over the weird void parrots is that they’ve got serious staying power. They have 10 wounds, Impossible to Wound, and Hard to Kill. You can’t use blasts or pulses on them, either, because they have Bearskin Armor (literally) that makes them immune to those effects. And, if you knock them below half wounds (so down to 5 or fewer) their Melee attacks deal +2 damage. 4/5/7 is a pretty scary damage line. You don’t want to be on the receiving end of that.
Five or six of these coming across the board at you makes for a nasty wall of wounds. They’re only Defense 4, so you’ll have no trouble hitting them. But the question is, can you kill them? Because the worst thing you can do is knock their wounds down to the point that they get the bonus to damage and then let them hit back. Worse, when playing against the bear spam AP efficiency is critical, and wounding them would make their AP more efficient and give them the ability to slow something in your crew, making you less efficient. The rest of the crew is built around either improving the efficiency of the bears or taking care of the jobs they can’t do. The bears aren’t fast, and they’re no more effective at completing schemes than any other model. The obvious master to pair with them is Marcus, and one of his more important jobs is to move quickly around the board and grab Symbols of Authority or complete a Breakthrough or Entourage style scheme. In the most committed bear crews, one that brings the full complement, the only models you bring with Marcus is something like a Malifaux Raptor and the Jackalope. Some of the other crews will drop one bear to give them a bit more flexibility in crew construction, letting them bring in some utility players with Well Rehearsed to help balance it out.

While Marcus is the obvious pairing, due to his beast synergy, they don’t interplay as much as you would think. It is nice, however, to keep him with a bear so he can pass attacks off to them and let them soak the damage, improving his survivability. Ultimately, the master at the top isn’t as important as long as they can do their job without relying on crew synergy. Sandeep is one obvious choice, as he is just good on his own and can summon Wind Gamin to round out the crew’s capabilities. Ramos is an interesting choice, as his summons can help to offset one of the crew’s weaknesses (spamming 7 stone minions means activation control is going to be an issue in a lot of games.) Additionally, his new upgrade Vox Populi allows him to place Hazardous Terrain that does 3/4/4 damage on the board. The bears can then use their Bear Hug to drag targets through the Strike Markers, which will usually end up dealing 7 damage. Other Arcanist masters may work, though I think those three have the most obvious synergy. Ironsides could get in and mix it up along with the bears, though that seems more like a win-more situation rather than adding in someone who could complement the bears. Colette could actually be pretty interesting with them, using Prompt to push the bears into position and give a free swing, shuffle them around with Disappearing Act, and let them perform some interactions with Rehearsed (though the latter means not using Bear Hug, which is obviously not optimal.) Rasputina, Kaeris, and Mei Feng don’t have incredible synergy with the bears, so you’ll probably want to avoid them, though a splash of, like, 3 bears into their normal crews could make for a decent sledge hammer.

So, when this unstoppable wall of bear flesh is…bearing down on you, what do you do? Well, you have one pretty clear advantage when you run into Bear Force One: you aren’t going to be surprised by what they’re going to do on the table. They’re going to come at you relentlessly with the bears leading the way, absorbing your attacks and draining your AP with their (0) action. While you’re tied up/getting mauled, the other parts of the crew will likely be scoring VP in the background and/or supporting them. So what do you do to counter it? First, you have to focus your fire. Put your whole crew’s attacks into key bear models, kill them, then move on to the next. The more hard-hitting min 3 damage you can bring along, the better. Additionally, if you can use terrain to make them come at you piecemeal rather than all at once, that is much better and will let you deal with the bears individually. Keep your crew together (though, obviously, not if the leader of the Bear crew is Raspy) so they can support each other and employ combined arms. And, obviously, figure out what the enemy crew is going to do and how to counter it. The bears aren’t experts at scheme running, so the models the opponent brings in the rest of the crew should telegraph how they intend to approach completing their objectives. If you can figure out what they’re doing, you can figure out how to counter it.

Ultimately, the bear list is real. It seems ridiculous, especially given that the Slate Ridge Mauler was considered an almost laughably bad model prior to the January Errata (what a difference one stone makes, eh?) but this is a legitimate threat on the board, and if you don’t approach it the right way you will get rolled up and crushed by models one can only assume are wearing silly red fezzes. You don’t want that, do you?

That said, this crew isn’t a set-list, take-on-all-comers army. In the right scenarios (Public Execution, Ours (though not with Guarded Treasure), Supply Wagon, etc.) they’ll be a force to reckon with (a Bear Force, that is...I'll stop, I promise). However, they’ll struggle in other games that require more finesse. The analogy I used to describe it is that they’re a great sledge hammer: awesome for knocking down walls, not so great for putting together an Ikea wardrobe. I think the real danger of this crew is that it can be sprung on you when you’re not expecting it. It’s one thing when someone announces they’re playing all bears every round of a tournament. When you know it’s coming, you can build to counter it. When you aren’t ready, though, you may not have the hitting power to take down the bears efficiently and may end up having to work around them instead. Additionally, they can function as a modular unit, especially if you go down to three or four bears rather than the whole crew, so there likely won’t be many clues that the bears are coming until you reveal crews. If you have a Guild crew of heavy hitters, you’ll be ok. If you’ve brought something like Shen Long that focuses its attack potential into a couple of elite models, you may end up swamped. As always, you have to read the game state and make a plan for how best to approach it.