Today's post (well, technically Friday's post. I'm late. Sue me) will be a battle report from Vassal where Phiasco and I continued working through Gaining Grounds 2018's January-March rotation, playing Ours. As an aside, we meet regularly for Vassal games Tuesday. You should come join us!

-Alt Lazarus is here! Sort of! You can't buy him though! But it gives you a new thing to spend your Guilders on! Exclamation marks!!! I want one!!!!

-We mentioned the Wyrdscapes line in a previous post, showing an image of a building they were going to do. Now, they've sent us an image of a much larger span of stuff that could be used to make a whole board. Hopefully it's modular, as this board might be a bit sparse on terrain for an average game, but it definitely looks cool! And expensive. Very, very expensive.

-Fire in the Sky released as a PDF on Drivethru RPG for $15. I recommended it before, and I think I'll do a review of it in the near future, but I like this module a lot. First of all, it takes you Earthside to San Francisco in 1906, integrating a significant incident that happened in the real Earth with The Other Side's fluff in a very cool way. Also, this module has by far the coolest Ongoing Skill Challenge of the game's history, which I cannot recommend enough. It's so cool. Check it out!

Strategy: Ours
Deployment: Corner
Schemes: Guarded Treasure, Covert Breakthrough, Show of Force, Search the Ruins, Take One for the Team.

My Crew
Dreamer-Dreams of Pain, Otherworldly, On Wings of Darkness, 7SS
2xDaydreams
Serena Bowman
Mr. Tannen
Hooded Rider-Warped Reality
Bultunginx2
Theory-While summoned models don’t count for Ours, their deaths don’t hurt our side either. As such, I can send them as sacrificial troops, while I use my stuff to score and lay some hits down. The Hooded Rider with Warped Reality makes for a good backfield defender early on and attacker on later decisive turns. Bultungins work well with D and Empty Night, and can make for good cheap flankers on their own. Tannen is there not for the Teddies (though, we’ll see how that goes)
My schemes: Guarded Treasure, Take One for the Team on Tannen

T1-My opening hand is pitiful. I’m going to have to use Tannen’s ability just to summon a single Stitched Together. Serena made the Hooded Rider and a Bultungin have Black Blood. We spent most of the first turn positioning and setting up for trouble in later turns. I’ll just throw in the screenshot.

T2-Serena and a Bultungin move around a flank away from where the combat is brewing to go and set up for Guarded Treasure. More positioning happens, as I’m trying to cagily avoid the devastating 1 turn charges that Asami’s crews can dish out. I did, however, have an amazing hand including the Red Joker and the 13 of Masks. Dual Teddy summoning? I mean, when was I ever going to have a chance again? Turns out it was probably the wrong choice, however, as Ohagaru Betari then proceeded to charge through both of them and maul them to death before I could heal them up. Whoops. We both score for Ours, so it’s 1-1

T3-The Nightmare Bultungin is in a good spot to eat a scheme marker, but can’t do that since the Ten Thunders Brother is there to block it, reaffirming to me how absurdly powerful they are. Bettari wins initiative and attacks my Hooded Rider, causing me to hold my breath in terror before he, instead, threw my Rider away and charged Tannen (clearly trying to make sure that I didn’t summon any more Teddies.) He kills Tannen. I score 2 for Take One for the Team. The Hooded Rider charges the aforementioned Ten Thunders Brother standing in the middle of the scrum, but fails to kill him on the first swing, so I can’t pick up a scheme marker to remove him. The 2nd attack flips a Red Joker, however, so then the scheme marker gets tossed. I congratulate myself on blocking his Guarded Treasure scheme, which I figure is probably a good and useful thing (I was only partially right.) The Dreamer hauls ass to get away from Betty and drops a scheme marker next to the center line for Guarded Treasure. At the end of the turn, only I score for Ours, so I go up 5-1. 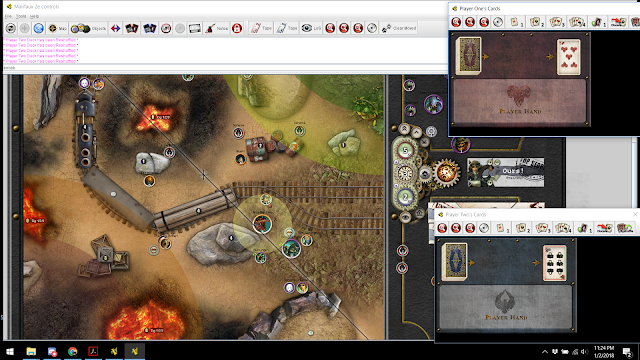 We take a one week break. Over the break, I convince myself he’s trying to complete Search the Ruins and Guarded Treasure. I’m half right, as I’ll find out.

T4-The plan for bringing Serena Bowman takes effect (which is good, because I felt kinda dumb for sending her off on her own to score Guarded Treasure uncontested but also not use any abilities. Whoops.) Dreamer now starts using Empty Night to control the Dead Rider and the Bultungin, followed by accomplishing into the Rider, to devastating effect. The two of them take down Amo No Zako and Sun Qiang. Asami, no longer required for handing out 1 AP charges, summons ac ouple of Yokai and uses one of them to bounce Bettari up onto a rock, to prepare for more charging on my master and/or beaters. To try and block him, I walk the Bultungin up onto the rock to engage him (and prevent him from charging away. Some more fiddling happens. Jon opens markers for Search the Ruins, confirming my prediction of his schemes (in my mind.) We both score Ours, so it’s 6-2. 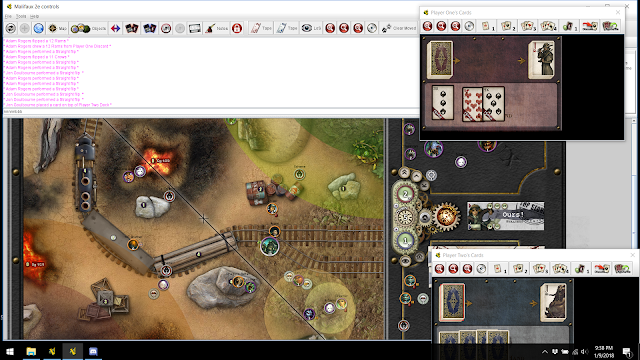 T5-The Dreamer summons Lelu and Lilitu (probably what I should have done instead of the Teddies.) I then Accomplice the Hooded Rider to charge Asami and knock her onto her Hard to Kill and remove a pair of Search the Ruins Markers. Bettari, however, proves that I am wrong about his schemes and escapes from the Bultungin to go drop markers for Covert Breakthrough, rather than Guarded Treasure. I should have seen this coming, since he had 2 Ten Thunders Brothers for scheme runners.) Lelu and Lilitu were summoned in a way to try and block the Guarded Treasure I thought he was doing, so their attempts now to Lure and Pounce on her to finish her is no longer relevant. Jon’s other 10T Brother runs into the backfield to drop another marker. When we total the points up, we see that he’s managed to catch up to me, and the game ends in an 8-8 tie. So, yeah. That kinda sucked.But it's Phiasco and I, so who was surprised? Not me. This is what happens when we play.

-Summoning Teddies is cute. And super greedy (if you’re familiar with CCG terminology.) It’s not the most efficient use of cards, though. Lelu and Lilitu summons would probably have been better on that turn, and in general.

-The experiment of whether Tannen’s ability to smooth out the “mana curve” of summoning by buffing masks is ongoing. I wouldn’t have been able to summon at all on turn 1 without him, and it let me summon two stupid Teddies. Both are outliers, and the experimentalist in me says that means I should throw those results out. More testing is needed.

-Trying to spot the enemy’s scheme choices mid-game are what you need to do. However, don’t marry yourself too hard to your prediction, as you can be wrong. There was literally a space of this game where it legit looked like Phiasco was going for Guarded Treasure (it was a Search marker and I misread his intent.) And, if you don’t know what the enemy’s schemes are, no lead is safe. Be prepared. Hood