Whisper and Void Excerpt: Battle in a Graveyard

-There's a new Penny Dreadful for sale on Drive Thru RPG, Jurassic Faux. If you needed some dinosaurs running around and causing trouble in your version of Malifaux. Plus, I'm sure there are some Fae in here, also. Here's the synopsis.

The University of Malifaux is launching an expedition into the Wildlands, the primordial forest that sprang up around the ruins of Nythera when Titania was released from her prison. The purpose of the expedition is to gather biological samples for further research, but one of the professors has his eye on a specific prize: the fabled Malisaurus Rex.

Unfortunately, the Wildlands are more dangerous that the University expected, and the Malisaurus Rex is very, very hungry...

Jurassic Faux is a challenging One Shot adventure for the Through the Breach roleplaying game. It requires the Core Rules to play.

-A patch for the Bad Things Happen app was pushed out on the 13th. It fixes a ton of the known issues. I'm not going to copy and paste the whole list here. Go ahead and check it out. 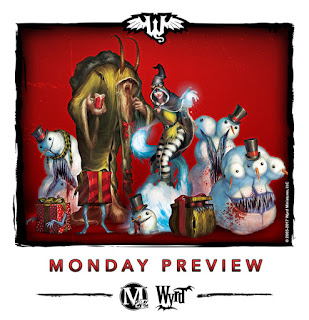 -We don't actually know what's going to be sale on Black Friday, yet, which is odd. We do know one thing that will be there, however, and that's the alternate Rasputina box featured in the image above. I like it a lot. Don't know if I'll be able to pick it up, but it's very cool. Plus, the Krampus counts as a Snowstorm, making it so you don't have to buy another box to have this key critical piece for Raspy crews.

-I've been plugging away at my novel (you can follow my progress on the NaNoWriMo page here.) As I've been working on it, I've been letting my Pandora (the music app, not the master) wander through some new inspiration music and pulling pieces out into a Spotify playlist. It's called Malifaux Musings. Follow the link and, if you have a song that you think really embodies the spirit of Malifaux, it'd be cool if we all built this together.

-Speaking of doing things together, what little forward momentum we had on the Patreon account has kind of stalled. The page is here, and I'd like you to really consider chipping in and helping out. I'm not asking for a lot. If you have an extra dollar a month, I'd love to have it to help expand Malifaux Musings. As always, I appreciate the hell out of everybody who has contributed so far.

Author’s note: This section occurs between chapter 1, detailing Burns’ recruitment and training, and chapter 3 when his recruiter teaches him the magic to use his casket.

Vinton wasn’t the worst of the lot, not by a long stretch. He wasn’t easy, mind you. I couldn’t tell you how many of my bones he ended up breaking, but I’m sure he’d tell you every one of them was a lesson. He had the very annoying habit of letting you know, every time you failed, how easily avoidable your discomfort should have been. “Oh, you didn’t notice that rune scribed in the door frame? Hmm, if you had, perhaps your arm wouldn’t currently be on fire. Let that be a lesson to you: the enemy will never face you on your terms. They will lay traps. They will stab you in the back. They will try every underhanded, sidewinding trick a man’s ever pulled on another man before they stand and face you, for you are Justice come to end them. Now, quit your belly-aching, put yourself out, and reset to position one.” The difference between Vinton and the others was that you got the impression, from time to time, that he actually wanted you to succeed rather than just gaining grim amusement from your suffering.
He came to us one hot summer evening when we were dragging ourselves back to our barracks and the sweet oblivion of the four hours they allotted for us to sleep. He pulled a half-dozen cadets out of line, myself among them, and took us towards a horse cart resting on the drillfield grounds. “You lot have a job tomorrow morning. Do it well, and you’ll get double food ration in the evening. How does that sound?”
The beige, flavorless gruel that served as our “rations” weren’t quite the enticement we had hoped for, but all of us knew better than to turn down an instructor. We reluctantly nodded, but a cadet with more attitude than sense stepped forward anyways. “What’s the job?” he asked, disregarding the warning looks everyone else was shooting him.
Vinton smiled. “Nothing too difficult or dangerous, Burns. You’re just going on bag duty.”


No, Vinton wasn’t the worst of the lot. But he sure as hell wasn’t the best, either.
Posted by AgentRock at 2:33 PM