Alright, folks, it’s time for the last Master Preview! The rest of these have all been exciting, cool themed masters that fill in some corners of the Malifaux universe or introduce some new ones. Time to see what the Gremlins br…wait…what? Zipp is apparently a Sky Pirate (introducing yet another new tribe/trait.) This is interesting, as it’s been mentioned in previous fluff that Malifaux is criss-crossed by sky cars that transport its citizenry. Clearly, these gremlins have come up with a new and innovative way of raiding these conveyances. I don’t know what thematic elements inspired this character other than…I don’t know, the Rocketeer? Oh well. I’m not going to pretend all the Gremlin silliness appeals to me, and their choice to raise the ante here doesn’t do it for me at all. But, that doesn’t mean the character can’t be interesting mechanically. 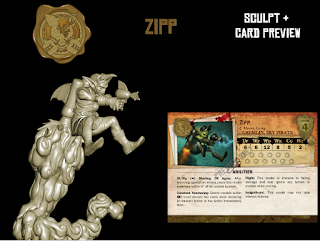 So yeah, Zipp’s weird as a master. Again, we can’t see his attacks to know what he’s going to bring to the table offensively, but Df 6/ Wp 6 and 12 wounds is not going to hold up to a lot of punishment. Off-setting it, you’re only going to get one hit on Zipp most of the time, as his trigger for Df and Wp will likely push him out of range for any follow-ups after resolving. On the face of him, Zipp kind of seems like a scheme runner/scheme runner hunter, which is odd for a master. I’m not sure there’s any that comes close to his raw speed: with an 8 Wk and 3 AP he can pretty much get wherever he wants in a turn. Of course, he’s insignificant, so no dropping scheme markers, but that won’t stop him from hunting down opposing runners or scoring for things that don’t require significance. And, his pseudo-chatty bubble will make interacting for things like Detonate Explosives or the old school Deliver the Message pretty tough.

I sort of feel like Zipp, more than most of the others, will require seeing the back to know what he can really do. As it stands, he strikes me as being a denial master, but his lack of staying power sort of seems counter-intuitive to that. I think he’ll do best in strats like Interference where the opposing crew will be spread out and you can chase them down individually. So, I guess we’ll see.

Now, since we know all the masters, it’s time to let your voice be heard! Which master from Ripples of Fate are you most excited to play? Go vote here!
Posted by AgentRock at 3:00 PM