May Day Tournament at Comic Dimensions in Greensboro NC

I know this tournament report is very late but I have been going back and forth on how I wanted to address an issue that occurred.  After careful consideration I have decided I would report the game as is, note my opinion and offer a open invitation to my opponent to discuss the game if he feels it is warranted.

Something I should have been doing is reviewing the venue and thanking the TO's for organizing the events and herding us cats.  So shout out and thank you to Chris Bellamy (and other previous TO's) for an awesome event.  Everyone I met was friendly (even in the game where I believe there to be an issue, more on that later) and I would gladly play anyone I met again (or for the first time).  And the buy in was relatively cheap at $10.

Comic Dimensions in a quick and dirty summary appears to be as the name suggests a comic book store first.  It dabbles in hobby, and has a small selection of Malifaux on hand (I assume you can order through the store and someone will correct me if I am wrong).  They do have a dedicated game space with nice tables and office chairs, although they were designed with CCG's in mind.  So while a Malifaux mat will fit on the tables, it feels a little cramp but you can make it work.  The terrain appears to belong to the henchman and not the store (I may be wrong on this count) so showing up out of the blue to get a game in might not work but if you coordinate in the community Facebook group I'm sure they will get you sorted.  All in all I like the store and would frequent it if I lived closer.

So without further ado... 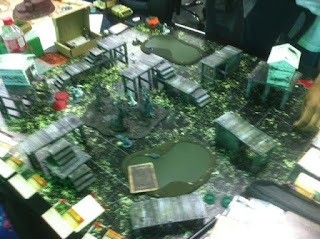 
So I think I won deployment and made him set up first.  He took the top corner and set his trappers up one in the deployment zone peeking out behind the walkway for cover and the other from the shadows up behind that hut on my right flank.  He set Vanessa, the Librarian, and a Wretch to support on my right flank and the slingshot to come up my left.  I set Huggy and an Illuminated to go up my right, 10 TB up the left, and everything else push the center and maybe respond as threats presented themselves.  Kinda wish I took snipers instead of the Illuminated just based on terrain.

Turn one and turn two was mostly maneuvering with pot shots from the Trappers. TB laying down 2 convicts, Illuminated placed the third. LSM was in charge range of the trapper in his deployment, and Blood came out of hiding to attack my Thunder Brother.  Turn 3 I win initiative activate Lynch pop RT, 0 action mulligan, double move to within range of Blood, land the shot with Red Joker in hand for the kill but Black Joker the damage on a straight flip.  And that's where it all went horribly wrong really... 2-9 loss.  Had I flipped Huggy and Yin like I should have done maybe it's not so lop-sided a loss or maybe I activate differently and this plays out way closer. 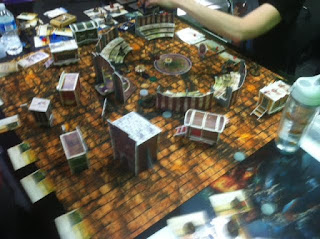 I will start off by saying I was replaying these games in my head on the way home and only then did it occur to me that this list might be over SS.  So I contacted the TO to check protocol and such.  That discussion will remain between the TO and myself.

So I leave this open invitation to discuss this game with my opponent here.  If you are reading this and know who I was playing I politely ask you to not take sides but you may bring it to this persons attention and we can work it out between ourselves.  I lost this game by 1 point and it would have no effect on prizes won but it does effect my final standing.  This wasn't important at the time (and for the most part is still relatively unimportant) but data is now being collected for US player rankings.  It also potentially effected who I ultimately played in the final round.  So if we resolve this to our mutual agreement there may be a stand alone post for this round.  I believe the list had at least 53 points in it but that only currently stands as my opinion.  I am also ok with if this game is never resolved.  There is really nothing to gain at this point.  The lesson is you can trust your opponent and pray this doesn't happen to you or you can take 30 seconds and do some math before each game.  This is not meant to be a dig because I won't say this 100% happened with malicious intent.  If you reach out and I fail to reply contact the TO and have him nudge me.  I suck at social media. 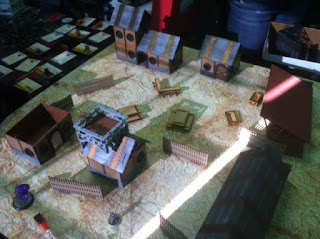 Strategy: Headhunter
Deployment: Standard (was meant to be corner but there was an error on the record sheet so we went with it)
Schemes: Convict Labor, Leave Your Mark, Hunting Party, Detonate the Charges, Set Up
Opponent: Brian


This game was quick and bloody.  I sent the 10TB to do schemes and he was unmolested and got me 6 for convict/leave mark.  I'm not certain if this is the models he owns or if there is some obvious synergy I am not seeing outside of lure into Teddy and Lelu.  I guess I can see banking on impossible to wound and all the built in healing but all I had to do was activate Lynch top of turn 2 and put brilliance on Teddy and now I have 3 models hitting for min damage 4.  Killed Lelu and Teddy turn 2 and tied up the rest of his models so I could score schemes.  I know he took Hunting Party and got a couple points on my Illuminated.  I think the game ended 9-2 (or3).

All in all I had fun, met new people, and hope to play in more NC tournaments in the future.  Next up Origins!